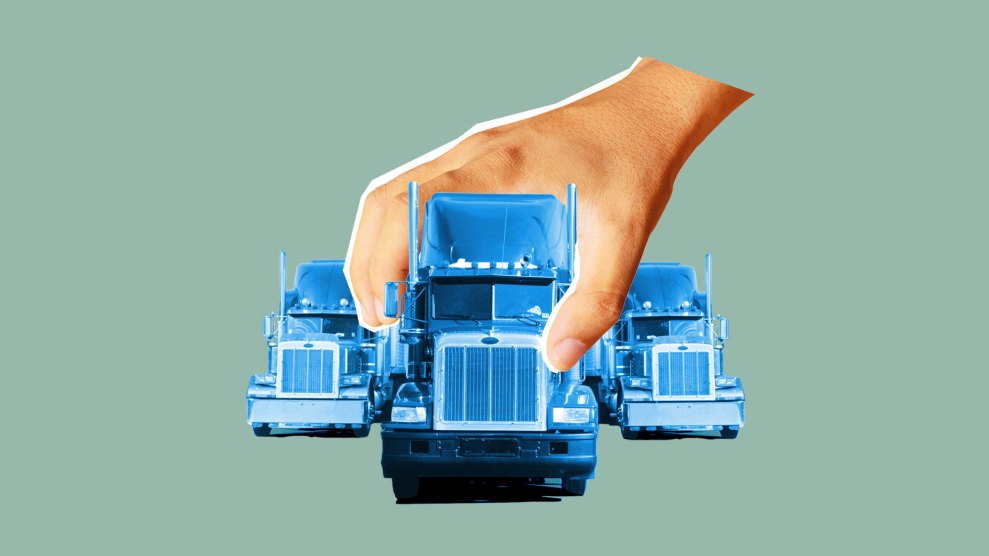 As the anti-vaccine protests in Canada drag on, American groups are furiously planning their own domestic versions of the truck convoys. As I wrote last week, organizing efforts are gathering steam on the social media platform Telegram, where group leaders with white nationalist ties are delivering marching orders to thousands of followers—many of whom appear to be parents.

The American convoy organizers have been careful to project a populist, grassroots image of “everyday patriots” uniting to protest government overreach. Yet behind the scenes, some of them have connections to powerful organizers on the far right. The conflict between the two strains of the movement is playing out in chaotic and voluminous Telegram chats, where participants jostle for power and are sounding increasingly paranoid.

As recently as last week, the organizers seemed to favor a more-is-better approach, encouraging supporters to plan their own small convoys where they live. Some participants seemed intent on staging a demonstration at the Mexican border; others discussed coalescing at the Northern border, near the Canadian convoys. Two main factions have emerged: The People’s Convoy, whose official Telegram organizing page has more than 46,000 followers, is now rallying people to leave from Barstow, California, on February 23, with plans to travel to Washington, DC.

A smaller group, Defeat the Mandates, is planning a separate protest and concert in Coachella later in the spring. The event was initially scheduled for March 5, but its leaders seem to have caved to pressure not to draw focus from the People’s Convoy, some of whose leaders have disparaged the smaller rally on Telegram. As Ryan Sanchez, the avowed white nationalist leader of the Orange County People’s Convoy chat, posted sarcastically on his personal Telegram page, “Instead of going to the Capital city of the nation, we can go to the opposite side of the continent, and listen to a bunch of elderly grifters promote themselves while we are serenaded by up-and-coming Jewish rappers.”

“We need to strike with a convoy NOW. Any time we wait is time we’re giving the feds and their antifa goons to prepare.”

The People’s Convoy organizers seem intent on broadening their base. They’ve gone on Steve Bannon’s Rumble talk show, “WarRoom Live.” And in an appearance Monday evening on the right-wing propaganda outlet Newsmax, Maureen Steele, a People’s Convoy leader, announced that her group would join forces with US Freedom Flyers, a conservative pilot’s group, and Global Covid Summit, a group of doctors that has advocated against Covid vaccines. “This is a slice of Americana in that white collar and blue collar are joining hands,” she said.

Most People’s Convoy media events feature a trucker named Brian Brase, who portrays the movement as a grassroots affair. “We want everybody involved,” he said on Newsmax. “All walks of life are involved in this.” Yet some of the movement’s leaders have extensive backgrounds in right-wing organizing. A far less visible People’s Convoy organizer is Leigh Dundas, an activist and attorney who has worked closely with the anti-vaccine group Freedom Angels. Dundas, who describes herself as a human rights lawyer and is a member of the Church of Scientology, has used Nazi imagery in previous protests.

And Dundas has organized many. She stirred up crowds the day before the January 6 insurrection, and staged an anti-vaccine demo last fall on the Golden Gate Bridge. In 2020, she spearheaded a protest against Orange County public health official Nichole Quick, and publicly revealed Quick’s home address. She later rallied a group to drive to the woman’s home in a U-Haul truck with a banner depicting Quick as Adolf Hitler.

In a video from a more recent event, Dundas describes hiring a private investigator to track Quick, and seeing rollerblades and sand buckets in the resulting surveillance footage of Quick’s yard. “That means you have children!” Dundas says in the clip. “You better damn well make sure they’re masked every time they step out of this door because we’ll be videotaping.” She goes on, “There’s more than one way to skin a cat.”

Yesterday, Dundas posted a map of the convoy route to Washington, DC, which included neo-Nazi memes from the far-right 4chan platform.

Some convoy cheerleaders have portrayed the American planning efforts as richly resourced and elaborately orchestrated. On Monday, activist Scott McKay, known for disrupting school board meetings, described a highly sophisticated operation. “They’ve got recon teams, comms teams, tactics,” he said on his “Patriot Streetfighter” livestream. “They have a logistics team provided by high-ranking retired war planners for the Pentagon. This is a serious operation, this convoy.” McKay insisted the convoy will include shower trucks, security, and fuel tankers in case truck stops get too crowded. “Kind of like Mad Max,” he said.

Elsewhere, preparations come off as chaotic. There is often confusion about the rallies, and where people can donate to the convoy efforts. After hackers last week exposed the names of supporters who donated on GiveSendGo—which portrays itself as the “#1 free Christian crowdfunding site”—many Telegram participants expressed a reluctance to use any online fundraising platform. Some suspected fraudsters were setting up bogus donation sites.

There also has been infighting within the Telegram groups about protest tactics. Some members advocate unfurling banners from highway overpasses; others counter that such strategies never work. “We’ve had peaceful march for lifes [sic] for a couple generations with hundreds of thousands and even millions showing up, yet nothing ever changes policy wise,” one complains. “It is because a peaceful demonstration that is non-disruptive is never able to force political change.” Another chimes in, “We’ve had YEARS for rallies, but we need to strike with a convoy NOW. Any time we wait is time we’re giving the feds and their antifa goons to prepare.”

Organizers sometimes refer to lessons learned from January 6. In the OC Convoy chat, one member advises participants to turn off location tracking on their phones because “many individuals at the 6th brought their phones with them, took pictures of themselves, and didn’t conceal their identity,” allowing law enforcement to “pinpoint who exactly was where and when.”

“Starting to think the whole convoy project is a deep state operation,” another member mused. Still others warned against going to DC, because President Biden would declare martial law. “Americans are more aggressive than Canadians,” one of them wrote. “Not as polite.”

In the OC planning group on Tuesday, Sanchez expressed grave concerns about the lack of organization. “As of now, we don’t actually have any communications with truckers,” he wrote. “I personally have NO confirmation that there is a single trucker going with us on this convoy.” He continued, “I don’t want to walk into a poorly planned disaster.”

Yet even if the DC trip fizzles, in a sense the organizers will have accomplished one major goal: spreading their ideology far and wide. In an appearance on the Bitchute platform Wednesday, Dundas appealed to whomever would listen. “We’d love any truckers, we’re putting a call out,” she said. “You don’t even need to have a big ol’ big rig. You can just be a mom in a soccer wagon or a Volvo.”