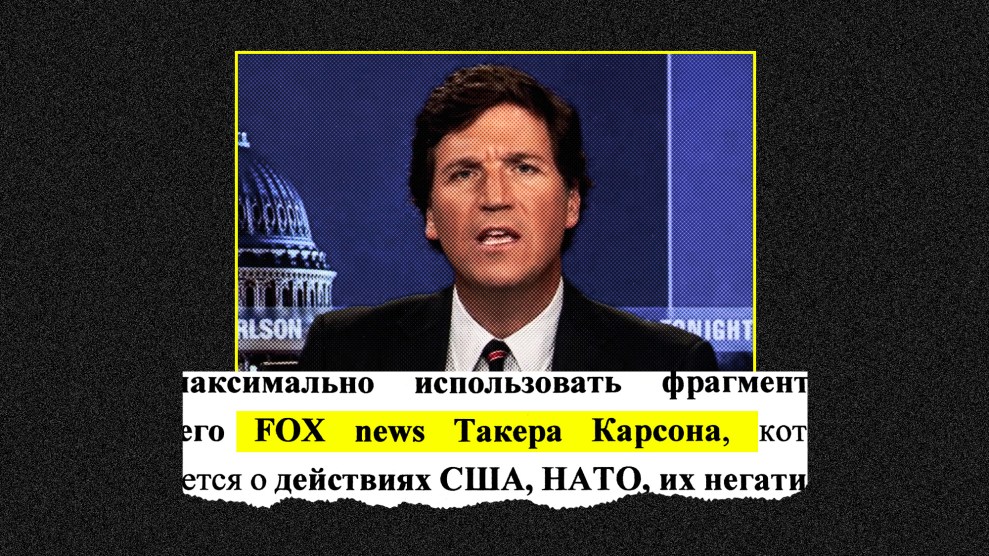 On March 3, as Russian military forces bombed Ukrainian cities as part of Vladimir Putin’s illegal invasion of his neighbor, the Kremlin sent out talking points to state-friendly media outlets with a request: Use more Tucker Carlson.

“It is essential to use as much as possible fragments of broadcasts of the popular Fox News host Tucker Carlson, who sharply criticizes the actions of the United States [and] NATO, their negative role in unleashing the conflict in Ukraine, [and] the defiantly provocative behavior from the leadership of the Western countries and NATO towards the Russian Federation and towards President Putin, personally,” advises the 12-page document written in Russian. It sums up Carlson’s position: “Russia is only protecting its interests and security.” The memo includes a quote from Carlson: “And how would the US behave if such a situation developed in neighboring Mexico or Canada?”

The document—titled “For Media and Commentators (recommendations for coverage of events as of 03.03)”—was produced, according to its metadata, at a Russian government agency called the Department of Information and Telecommunications Support, which is part of the Russian security apparatus. It was provided to Mother Jones by a contributor to a national Russian media outlet who asked not to be identified. The source said memos like this one have been regularly sent by Putin’s administration to media organizations during the war. Independent media outlets in Russia have been forced to shut down since the start of the conflict.

The March 3 document opens with top-line themes the Kremlin wanted Russian media to spread: The Russian invasion is “preventing the possibility of nuclear strikes on its territory”; Ukraine has a history of nationalism (that presumably threatens Russia); the Russian military operation is proceeding as planned; Putin is protecting all Russians; the “losing” Ukrainian army is shelling residential areas of eastern Ukraine controlled by Russia; foreign mercenaries are arriving in Ukraine; Europe “is facing more and more problems” because of its own sanctions; and there will be “danger and possible legal consequences” for those in Russia who protest the war. The document notes that it is “necessary to continue quoting” Putin. It claims that the “hysteria of the West had reached the inexplicable level” of people calling for killing dogs and cats from Russia and asks, “Today they call for the killing of animals from Russia. Tomorrow, will they call for killing people from Russia?”

A section headlined “Victory in Information War” tells Russian journalists to push these specific points: The Ukrainian military is beginning to collapse; the Kyiv government is guilty of “war crimes”; and Moscow is the target of a “massive Western anti-Russian propaganda” operation. It states that Russian media should raise questions about Ukraine President Volodymyr Zelenskyy’s state of mind and suggest he is not truly in charge of Ukraine. And it encourages these outlets to “broadcast messages” highlighting the law recently passed by the Russia Duma that makes it a crime to impede the war effort or disseminate what the government deems “false” information about the war, punishable for up to 15 years in prison. This portion instructs Russian journalists to emphasize that these penalties apply to anyone who promotes news about Ukrainian military victories or Russian attacks on civilian targets.

This is the section of the memo that calls on Russian media to make as much use as possible of Tucker Carlson’s broadcasts. No other Western journalist is referenced in the memo.

Mother Jones is not posting the full document to protect the source of the material. Here are photos of the memo. The first shows the opening page; the next displays the paragraph citing Carlson.

Prior to the Russian invasion, Carlson was perhaps the most prominent American voice challenging opposition to Putin. In one now-infamous commentary, he said, “Why do Democrats want you to hate Putin? Has Putin shipped every middle class job in your town to Russia? Did he manufacture a worldwide pandemic that wrecked your business? Is he teaching your kids to embrace racial discrimination? Is he making fentanyl? Does he eat dogs?”

Carlson repeatedly noted there was no reason for the United States to assist Ukraine in its battle with Russia and insisted it was “not treason, it is not un-American” to support Putin. He contended that Ukraine was not “a democracy” but a “client state” of the US government.

After Putin attacked Ukraine, Carlson ceased his anti-anti-Putin rhetoric and shifted to a new line: that the United States and the West purposefully goaded Putin into launching the war. Carlson said it was “obvious” that “getting Ukraine to join NATO was the key to inciting war with Russia.” He asked, “Why in the world would the United States intentionally seek war with Russia? How could we possibly benefit from that war?” He said he did not know.

More recently, Carlson mouthed Russian disinformation, and he did so as a new set of Kremlin talking points once again pushed Russian journalists to cite the Fox host.

On Wednesday, Carlson claimed that the “Russian disinformation they’ve been telling us for days is a lie and a conspiracy theory and crazy and immoral to believe is, in fact, totally and completely true.” He was referring to the Russian allegation that the United States had set up biowarfare labs in Ukraine. But this charge was far from proven. At a congressional hearing, Undersecretary of State Victoria Nuland had testified that Ukraine possessed biological research facilities and that the US government was worried about “research materials” falling into the hands of Russian forces. This was a far cry from substantiating the Russian charge that Washington was working on bioweapons in Ukraine. But Putin’s regime jumped on the Nuland testimony and cited it as proof of nefarious American activity. Carlson echoed this Russian propaganda.

A March 10 “recommendations for coverage” memo from the same Russian agency highlights this bioweapons allegation as a top talking point for Russian media, noting the message should be that the “activities of military biological laboratories with American participation on the territory of Ukraine carried global threats to Russia and Europe.” The document goes further, encouraging its recipients to allege that the “the United States is working on a ‘biogenocide of the Eastern Slavs.'”

The memo lays out the details of this bizarre conspiracy theory: The United States was conducting “experiments with genetic material collected on the territory of Ukraine,” with the “main objective” being “to create unique strains of various kinds of viruses for targeted destruction of the population in Russia.” The United States even had a plan to transmit pathogens “by wild birds migrating between Ukraine, Russia and other neighboring countries.” This scheme included “studying the possibility of carrying African swine fever and anthrax.” The memo claims “biolaboratories set up and funded in Ukraine have been experimenting with bat coronavirus samples.” It cites Nuland’s testimony and says the United States was involved with “military biological laboratories” in Ukraine that “potentially posed a global threat to all of Europe.”

Carlson had amplified a slice of this Russian propaganda.

The March 10 memo advises Russian journalists to cite Carlson on another matter: how the economic sanctions imposed on Russia would harm Americans:

American analyst and Fox News journalist Tucker Carlson called President Biden’s sanctions policy a punishment for the American middle class: “Biden explained that he was going to punish Putin by banning Americans from buying Russian energy resources. But the problem is that markets around the world are already ready for Russian oil, starting with China, India, and Turkey. If you want to get to the bottom of it, just think about who will suffer the most from sanctions? The answer is not on the surface. Middle-income Americans will suffer. The very people who were crushed by Covid restrictions for two years. Now they will suffer from cuts to energy sources… So, the Vladimir Putin who is being punished, is actually American citizens—yes, all of you.”

The document notes that Carlson’s anti-sanctions argument “can be reinforced with a selection of reports that enthusiastically encourage Americans to tighten their belts in the name of saving Ukraine.”

As with the March 3 memo, Carlson was the only Western journalist named in this more recent how-to-help-Putin memo. But this edition does point out that the New York Post “writes that it was not anti-Russian sanctions that spurred inflation, but rather the wild spending of Joe Biden himself. President Biden wants to blame Vladimir Putin for the rise in inflation. However, all the fault comes from his policy implemented long before the Ukrainian crisis.”

The March 10 guidelines contains other false claims for Russian journalists to promote: that US forces had been training Ukrainians to launch an offensive in Donbas this month and that Russia’s attack on Ukraine was an effort to preempt that military action; that the Ukrainians have plans to “use nuclear weapons in some form”; and that the horrific bombing of Mariupol that struck a hospital and a birthing center was fake news. It urges Russian journalists to assert that Russia was being victimized by cancel culture and Russophobia was “on the march.”

It’s unclear whether these memos had any impact on Russian media outlets, which already were regularly citing and praising Carlson. Pro-Putin media organizations in Russia may not have needed the Kremlin’s recent encouragement to make Carlson a star. RT, the Russian propaganda outlet, embraced Carlson’s defense of RT after social media companies banned RT content. And on Friday, Komsomolskaya Pravda ran a splashy story headlined “Well-known American TV journalist Carlson was outraged by the ‘lies of the United States.'” It was all about Tucker’s on-air (and unfounded) anger over the Nuland testimony and the biolab allegations. In this instance, a pro-Putin Russian media outlet was using Carlson’s disinformation to advance Moscow disinformation. Just like the Kremlin wanted.

Fox News and Carlson did not respond to requests for comment.