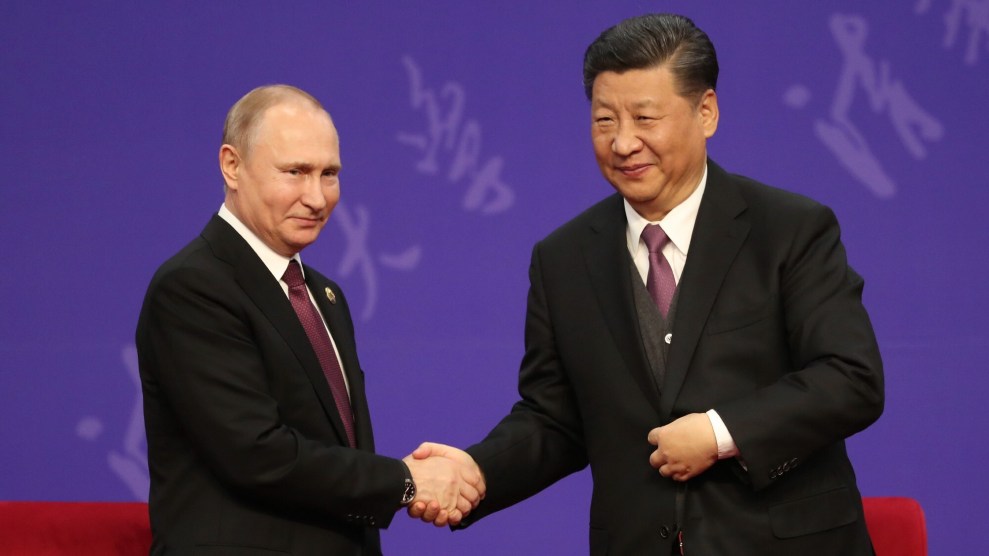 Since the start of Russia’s invasion of Ukraine, Chinese leader Xi Jinping has opted for what one scholar calls a “pro-Russia neutrality.” That looks in practice as weird as it sounds. Instead of silence, the Chinese government has emitted a chorus of contradictory messages. Appeals for peace in Ukraine mix with odd affirmations of Russia’s “legitimate” security concerns there. State propaganda hedges official messages by echoing Russian disinformation and attacking the US government. This allows the Chinese government to keep up its quasi-alliance with Russia—never consecrating it or abandoning it.

On the one hand, last week, China pledged nearly $800,000 of humanitarian aid to Ukraine. Xi, who has pushed for “maximum restraint,” made news by calling the invasion a “war,” a term the United Nations had reportedly been reluctant to use. These statements reflect what experts say is China’s genuine interest in keeping a friendly relationship with Europe, which has grown testy at times despite China openly courting countries like Italy and Greece.

But whatever interest China has in being an honest broker is completely undermined by its state media apparatus and a massive, online propaganda campaign that parrots Russian disinformation and harshly attacks the West. Soon after the invasion began, a Chinese propaganda account accidentally posted guidelines for its coverage that said “no posts unfavorable to Russia or with pro-Western content should be published,” the Washington Post reported.

What Chinese state media did publish were posts like a March 9 article calling the United States “an empire of lies,” a phrase Putin has also used. That same day in a press conference, Foreign Ministry spokesperson Zhao Lijian echoed Russian disinformation about the United States building bioweapons in Ukraine. As Bill Bishop, an influential China watcher, noted in his well-read newsletter, “Russia and the PRC sure seem to be coordinating their information war.”

One example cited by CNN was Chinese state media’s fixation on Ukrainian President Volodymyr Zelenskyy’s location in the immediate aftermath of Russia’s invasion. After he started posting videos of himself on the streets of Kyiv, “more than 160 Chinese state media outlets” falsely reported that Zelenskyy had fled the Ukrainian capital.

On social media, the Chinese Foreign Ministry account began amplifying the Russian conspiracy of US bioweapon laboratories in Ukraine, part of what David Bandurski, co-director of the China Media Project, described as a “broader project to reshape the global information landscape to favor the Kremlin and Beijing’s authoritarian political projects.”

The US should giver a full account of its biological military activities at home and abroad and subject itself to multilateral verification.

The more important question going forward is whether China and Russia will coordinate more than just talking points. US officials, speaking anonymously to the New York Times, alleged on Sunday that Russia requested military and financial assistance from China to support its invasion. The original report did not specify how China responded, but on Monday, Reuters said US officials had been telling their allies in NATO and Asia that China “had signaled” a willingness to help Russia.

“I don’t think China would explicitly say it is helping Russia,” says Bonnie Glaser, director of the Asia Program at the German Marshall Fund of the United States. “That doesn’t mean that it isn’t.” With US sanctions continuing to pummel Russia’s currency and weaken its already fragile economy, Chinese assistance could be a crucial lifeline for Putin and a tangible sign of their renewed alliance.

Russia and China have not had a particularly rosy history despite sharing a Communist past, but earlier this year Putin and Xi issued a lengthy statement expressing their “no limits” partnership and decrying the expansion of NATO, the Western alliance whose enlargement Putin has treated as an existential threat. Around that time, Chinese officials successfully urged their Russian counterparts to wait until after the Olympics to attack Ukraine, according to several media outlets, including the New York Times and the Hong Kong-based South China Morning Post. (Zhao, the Chinese spokesperson, said the claims were a “despicable” US attempt “to shift blame, stoke confrontation and profit from the issue.”)

Xi and his deputies have not directly criticized Putin in the weeks since the invasion, though there does seem to be some consternation among the country’s elites over what China expert Evan Medeiros calls the country’s stance of “pro-Russia neutrality.” Days after the invasion began, five prominent Chinese academics released an open letter urging Putin “to stop the war and resolve any dispute through negotiation.” The letter was quickly removed from the Chinese internet, but in private, Chinese officials have acknowledged the awkwardness of supporting Putin even as the wider world has made him a pariah.

Wang Huiyao, the head of a Chinese think tank who advises the government, wrote in the New York Times on Sunday that China “may find itself in a position of diminishing returns in its close relationship with Russia” as the war goes on. Wang argued that China would be well-positioned to mediate an end to the conflict given the economic leverage it holds over Russia. “As he and his country face increasing isolation, he can’t afford to lose China, too,” Wang wrote.

Even if Wang is right to push China toward a mediator role, his government does not appear to be listening. On Monday, the Chinese Foreign Ministry was again tweeting conspiracy theories about US bioweapons in Ukraine and bashing US “disinformation” about China. Pro-Russia neutrality, indeed.