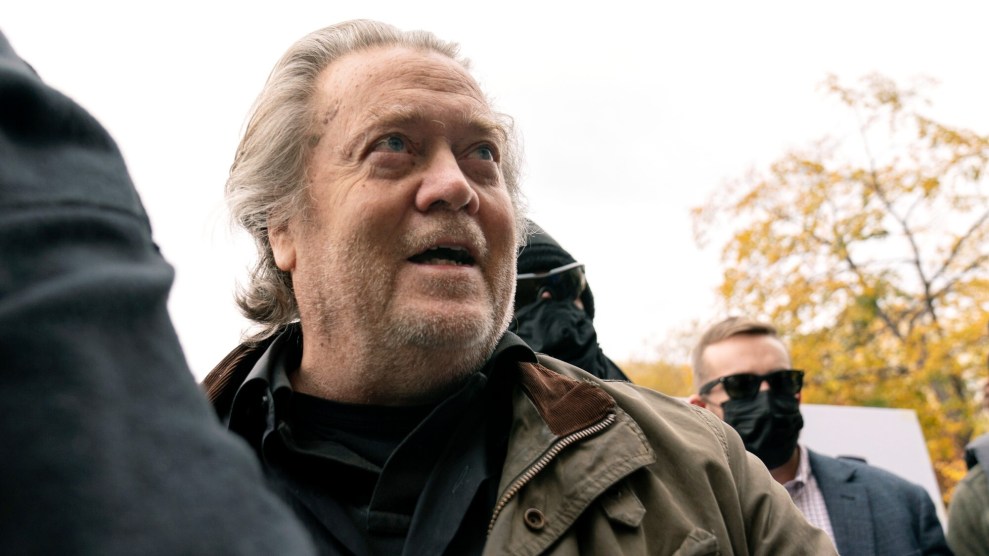 A weird thing happened in the hours after I published a story about Steve Bannon’s podcast and its relentless anti-China crusade. He seemed to…really like it?

He also told Guo the story was the “best article ever written about me,” according to messages obtained by my colleague Dan Friedman, who wrote an extensive profile of Guo last week.

Such a positive reaction is a bit odd given that I described Bannon’s podcast, War Room, as a clearinghouse for conspiracy theories about the 2020 election, coronavirus vaccines, and China. As I wrote, “Bannon can take any subject—from George Floyd’s murder to Trump’s 2020 election loss—and turn it into a galaxy-brain plot, with China as the source of all ills.”

As the mainstream discourse about China in the United States has turned more pessimistic and combative (due in no small part to China’s worsening authoritarianism), Bannon stands alone as a hawk among hawks. Later in the piece, I mention how even relatively hawkish Republicans like Rep. Nancy Mace (R-S.C.) fail to win his seal of approval even when arguing for similar policies toward Taiwan and other issues. “I don’t think in my experience I’ve found someone who is further right when it comes to being a China hawk than Bannon,” Justin Horowitz, a Media Matters for America researcher, told me.

Bannon loves having this reputation. He’s crowed in the podcast about being labeled a “Superhawk” in Washington Post columnist Josh Rogin’s book, Chaos Under Heaven, which covers the Trump administration’s China policy. “We’re the anti-CCP group right here. I’ve been doing this for years,” he said in one episode. “It’s one of the focal points of my life.”

To Bannon, nothing is more of a compliment than being described as nearly unhinged in his obsession with China. Alongside Guo, he has pushed for regime change in China (while mocking “neocons” who argue for the same elsewhere) and even co-founded a government-in-exile that awaits the downfall of the Chinese Communist Party. This “New Federal State of China” has not actually done much besides spread conspiracy theories, but it remains a signature part of Bannon and Guo’s propaganda.

Guo himself is a curious figure in all of this. Despite being a focal part of Bannon’s anti-China crusade, he has targeted other China hawks and was accused in multiple lawsuits of being a Chinese agent posing as a CCP critic. (These claims are unproven and Guo strenuously disputes them.)

Whatever Bannon’s reasons for opposing China, he has made it the focal point of the MAGA movement’s next act. As I argued in the piece, it is impossible to understand where this movement is going without seeing China at the center of it.

Bannon doesn’t care about being seen as a warmonger, conspiracist, or white nationalist. He just wants to be seen as the tip of the spear challenging China. Even if that means praising an article in Mother Jones.