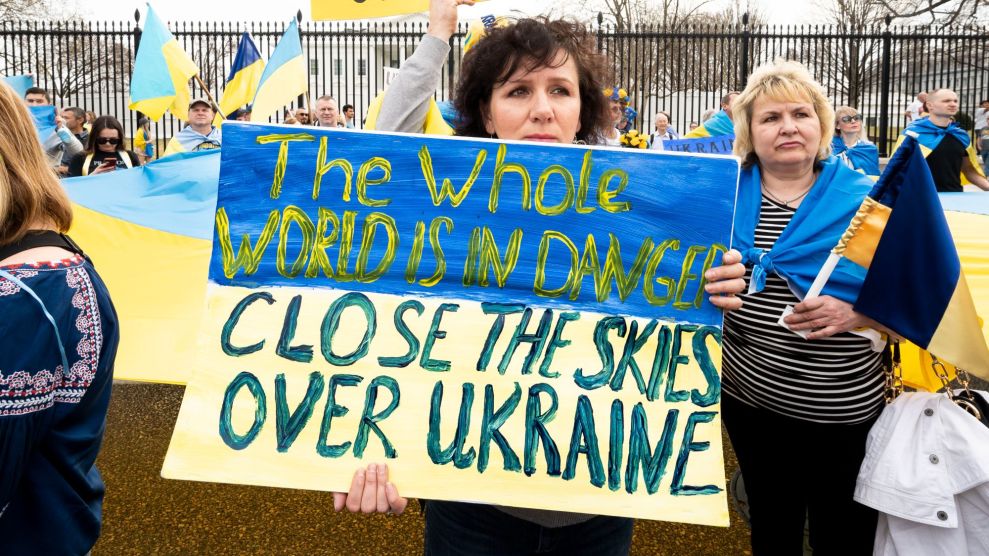 Toward the end of his address to Congress yesterday, Ukrainian President Volodymyr Zelenskyy played a disturbing and graphic video that interspersed clips of the Russian aerial bombardment with footage of its human fallout: children screaming, an injured pregnant woman on a gurney, a body being tossed into a mass grave. As the video concluded, text appeared on the center of the screen: “Close the sky over Ukraine.”

Zelenskyy has been making similar calls for a no-fly zone for more than a week now, emphasizing the death and devastation raining down on Ukraine from above. But the overwhelming bipartisan consensus in Washington and throughout Europe is that a no-fly zone simply isn’t tenable. (Even Sen. Lindsey Graham, who called for Russians to assassinate Putin, has deemed a no-fly zone to be “a bridge too far.”)

It’s fully understandable that Zelenskyy would endorse any measure that would help Ukraine beat back Russia’s assault. What’s startling, though, is that his favored policy seems to enjoy the broad support of the American public. According to a Reuters/Ipsos poll, 74 percent of Americans across the political spectrum said they supported a no-fly zone to protect Ukraine. But there’s a problem here: most people don’t seem to know what a no-fly zone actually is and what it would entail.

A no-fly zone is essentially a commitment to ensure that no enemy aircraft can enter a designated area. In order to make good on this pledge, the U.S. and NATO would have to patrol the skies above Ukraine with thousands of flights and shoot down any Russian planes that violated the banned airspace. Given that Putin has already ignored America’s warnings not to invade Ukraine and not to target Ukrainian civilians, it’s exceptionally unlikely that he would suddenly heed threats to stop sending planes into Ukraine. And destroying Russian aircraft would trigger all-out war between Russia and the West.

Plus, a no-fly zone could end up provoking a war even before American planes entered Ukrainian airspace. According to the Atlantic Council’s Damir Marusic, America would most likely build up to a no-fly zone by destroying the Russian military’s substantial anti-aircraft batteries in Belarus and Russia so that American pilots could fly without the constant threat of being shot down. Violating Russia’s sovereignty and bombing Russian military bases outside of Ukraine would also result in direct conflict.

To boil it down, implementing a no-fly zone would amount to a declaration of war with Russia. There’s virtually no other way to slice it.

Equating a no-fly zone with war isn’t controversial among foreign policy scholars. Even experts who have expressed support for a no-fly zone have admitted that implementing one would almost certainly result in open war with Russia. Former NATO commander Philip Breedlove, one of about 30 signatories to an open letter urging a “limited no-fly zone,” conceded in an interview with Foreign Policy that “the reality of a no-fly zone is… an act of war.”

Most significantly, Vladimir Putin, the only person whose opinion on this issue matters, has stated outright that anybody who seeks to impose a no-fly zone would be “participating in the armed conflict.”

Even without all that context, surveys have found that support for the idea drops when Americans are informed of even the basics of how a no-fly zone operates in practice. The same Reuters/Ipsos poll that seemed to show widespread approval for a no-fly zone found that a majority of people disapproved of sending U.S. armed forces into Ukraine or conducting air strikes to support the Ukrainian army, two things that a no-fly zone would require.

It may be the case that protesters gathered outside the United Nations in New York on March 1, urging for a NATO-imposed no-fly zone. And on March 11, activists calling for the U.S. to close the skies filled the Guggenheim Museum with paper planes. But it’s also hard to believe there would be as much widespread support for a no-fly zone if more people understood the potential outcomes.

Especially because in the past, said Stephen Wertheim, a senior fellow at the Carnegie Endowment for International Peace, no-fly zones have never stopped a war. In earlier cases, they were imposed on “much weaker adversaries than Russia.” What happens when you try placing one on a strong foe? Wertheim believes that implementing a no fly zone above Ukraine would significantly heighten the risk of nuclear exchange by miring the U.S. in a conventional war against an adversary that has already threatened to use nuclear weapons.

“Putin has a history of paranoia,” Wertheim explained. “He has believed that the United States has sought regime change in Moscow for some time, and he’s looked at U.S. actions in Iraq and Libya and elsewhere, as evidence. One thing that a no-fly zone would do would perhaps add to this perception by Putin that his own survival as the leader of Russia and thus as a living person would be threatened. If he were ever to believe that he has nothing left to lose and he has to do something dramatic to change the situation to have a chance of survival, then we get into a major risk of nuclear use.”

It’s also not clear how effective a no-fly zone would be at preventing civilian deaths. In an article for The Conversation, foreign policy experts Christopher Faulkner and Andrew Stigler pointed out that the Russian air force has been “surprisingly inactive” so far and that most of the 636 civilian deaths in Ukraine to this point have been caused by missiles, rockets, and artillery, rather than aircraft. Most air attacks have been launched from within Russia, via long-range missiles over the border, rather than from the skies over Ukraine.

Fortunately, the Biden administration and foreign policy experts in Washington seem almost unified in their commitment to restraint on this particular issue. In response to the letter that Breedlove and others signed in support of a “limited no-fly zone,” Wertheim joined scholars and experts in circulating an open letter opposing the idea, which generated about three times the number of signatories in less than two days.

It’s unclear whether the protesters chanting to close the skies over Ukraine are aware of the consequences of what they’re calling for. But it strains credulity that a majority of Americans would disapprove of a war with Russia while signing on to a drastic military action that would guarantee that one took place.