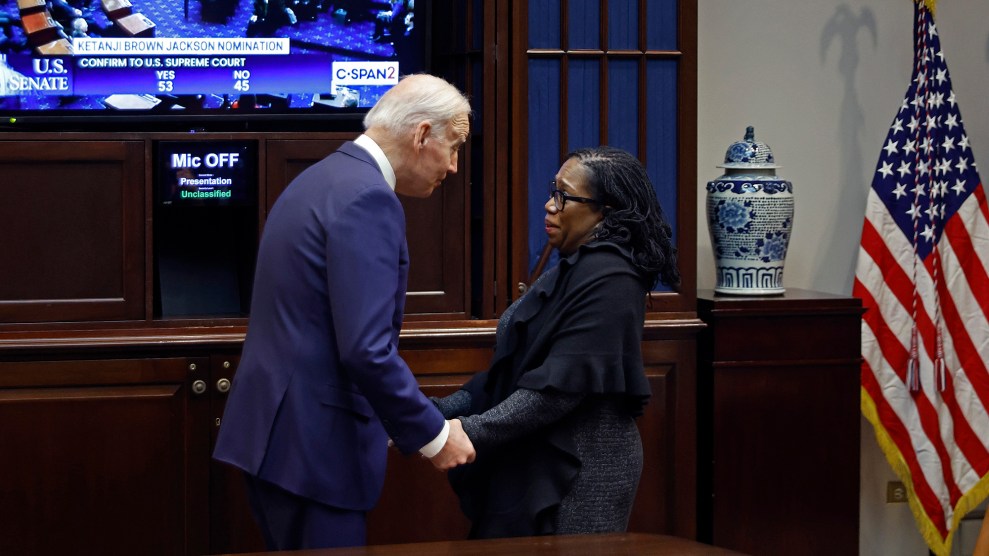 President Joe Biden congratulates Ketanji Brown Jackson moments after the U.S. Senate confirmed her to be the first Black woman to be a justice on the Supreme Court.Chip Somodevilla/Getty

Jackson, 51, will be the first justice to join the court with any experience as a defense attorney since the retirement of the legendary Justice Thurgood Marshall in 1991. A mother of two daughters, she brings to the court extensive experience as a federal trial court judge, having served for eight years on the US District Court for DC before Biden nominated her last year for a seat on the DC Circuit. Jackson will join fellow Harvard Law graduates Elena Kagan, Neil Gorsuch, and Chief Justice John Roberts on the court. She brings more legal experience to the job than four other justices currently on the court at the time of their nominations.

Republicans had tried to paint Jackson as soft on crime and attacked her for representing terrorism suspects detained indefinitely without trial at the Guantánamo Bay naval base. They used much of their time during her confirmation hearing to pepper her with questions unrelated to the law, but ones that tapped into hot-button issues among the GOP party base. Sen. Ted Cruz (R-Texas) suggested that Jackson was the pick of “radical leftist groups” and that she was the “most extreme” nominee Biden could have picked, echoing a campaign by right-wing dark money groups to complain that left-wing dark money groups were involved with Jackson’s selection and promotion. Cruz even quizzed her about critical race theory, referring to a book that was used at a Washington private school and asking her if she thought “babies are racist.” Sen. Marsha Blackburn (R-Tenn.), diving into anti-trans politics, asked her, “What is a woman?”

Cruz had joined Sen. Josh Hawley (R-Mo.) in pandering to their party’s QAnon conspiracy theory wing by falsely alleging that Jackson had been soft on child pornographers during her time as a federal trial court judge. The systematic GOP red-meat attacks depressed support for Jackson among Republicans, nearly 60 percent of whom had told pollsters before Biden nominated her that she was qualified for the high court. But after the confirmation hearing, that fell to around 30 percent.

Overall, after watching her graceful performance under pressure, Americans were not happy with the Republican attacks on Jackson, who proved to be anything but a fiery leftist radical. A Quinnipiac poll indicated that only 27 percent of respondents approved of the way Republicans had treated her. And in the end, Republicans never had the votes to block her nomination as long as every Democrat voted in her favor. (Wildcard West Virginia Democrat Sen. Joe Manchin said early on he would support Jackson.) The only open question during the confirmation process was whether any Republicans might cross the aisle. Initially, only Sen. Susan Collins (R-Maine), who had come under intense fire for her vote in favor of Justice Brett Kavanaugh in 2018, as well as Alaska Republican Sen. Lisa Murkowski seemed on board to support Jackson.

But Sen. Mitt Romney (R-Utah), who’d voted against Jackson’s confirmation to the DC circuit last summer, unexpectedly reversed course and voted for her to ascend to the Supreme Court, bringing a glimmer of bipartisanship into the vote. In a statement announcing his intention to vote for her confirmation, Romney called Jackson a “person of honor,” even as he acknowledged that he might have some differences with her judicial philosophy. “While I do not expect to agree with every decision she may make on the Court,” he said, “I believe that she more than meets the standard of excellence and integrity.”

I intend to vote in support of Judge Ketanji Brown Jackson’s confirmation to be an associate justice of the U.S. Supreme Court. My statement: pic.twitter.com/uGaxx8sJn5

In appealing to Romney as a potential third “yea” vote by a Republican, Jackson’s supporters focused on her decisions involving religious freedom. Late last month, 16 faculty members from Brigham Young University law school in Utah wrote a letter to Senate leaders, as well as Romney and Sen. Mike Lee (R-Utah), who graduated from the law school, expressing their support for Jackson’s confirmation. They cited her broad experience, Ivy League education, and a notable decision as a trial court judge in favor of a Christian plaintiff who, representing himself, had filed a religious discrimination suit against his employer after he was retaliated against by a supervisor for listening to gospel music at his workstation while his co-workers played secular music.

“Though we do not believe that religious faith should be a test for any federal office, as faculty at a law school whose sponsoring church endured persecution by the federal government, we find it worthy of note that Judge Jackson understands and values the freedom of religion,” they wrote. Romney didn’t cite the letter in his statement, but it had clearly been aimed at him. His Utah colleague, Mike Lee, who is facing a GOP primary challenge this year, was unpersuaded and voted no along with nearly all the other GOP senators.

Jackson will replace retiring liberal Justice Stephen Breyer, 83, and join the court for the October term.