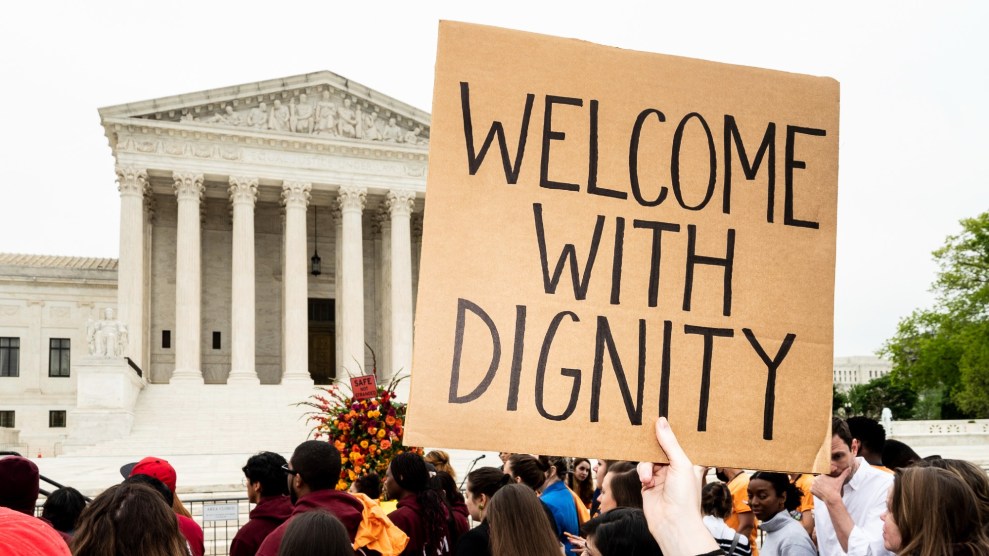 Protest against the Remain in Mexico Policy at the Supreme Court.Michael Brochstein/Sipa USA/AP

Can the Biden administration end a Trump-era policy that forced thousands of asylum seekers and migrants to wait in Mexico for their immigration court dates in the United States? That’s the question at the center of Biden v. Texas, the high-stakes case before the Supreme Court where oral arguments were heard on Tuesday. The justices are expected to rule on the future of the Migrant Protection Protocols (MPP) program, informally known as the “Remain in Mexico” policy, by late June. But their decision can have implications well beyond immigration. At the core of this case is also the question of whether any future elected president has the ability to do away with policies put in place by a previous administration.

On his first day in office, fulfilling one of his campaign promises, Biden suspended MPP—a disastrous policy that left 70,000 non-Mexican migrants stranded, sometimes for years, in squalid and dangerous makeshift camps along the southern border. In June 2021, Department of Homeland Security Secretary Alejandro Mayorkas officially rescinded the program, concluding it didn’t “adequately or sustainably enhance border management” and that keeping it in place didn’t outweigh its costs, challenges, and risks.

As Mother Jones has reported extensively, the harsh policy has had devastating consequences for asylum seekers and migrants. Between 2019 and 2021, there were at least 1,544 reported cases of murder, rape, kidnapping, and torture against people forced to wait in limbo in Mexico, according to Human Rights First. On top of the dangerous circumstances they faced at the border, the overwhelming majority of asylum seekers placed under the program lacked access to lawyers and lost their cases in immigration court.

But Republican attorneys general in Texas and Missouri—the latter despite not sharing a border with Mexico—challenged the Biden administration’s move to terminate the policy as unconstitutional and argued, among other things, it would burden the states with expenses on health care, education, and other social services for arriving migrants. In August 2021, Trump-appointed US District Court Judge Matthew J. Kacsmaryk sided with the states, ruling that the federal government either had to detain all migrants seeking asylum at the border or force them into Mexico. (Kacsmaryk, former deputy general counsel at the conservative Christian First Liberty Institute, has expressed anti-LGBTQ views, describing transgender people as “delusional,” and has publicly criticized Roe v. Wade.)

He issued a nationwide injunction ordering the government to reinstate and keep “Remain in Mexico” in place indefinitely pending ongoing litigation or congressional action. After the conservative Fifth Circuit Court of Appeals dismissed a second attempt by the government to justify the end of the policy last October as having “zero legal effect,” the Biden administration went to the Supreme Court that, over the objection of the three liberal justices, refused to step in and block the court order forcing the government to bring back the program.

The use of nationwide injunctions like the one issued by Kacsmaryk has effectively outsourced national immigration policy to judges and individual states, as opposed to Congress or the executive branch. And that has been true under different administrations over the past decade, affecting both pro and anti-immigrant rights policies. Under Trump, such injunctions blocked original versions of the travel ban targeting nationals from Muslim-majority countries and the application of the public charge rule, which would deny green cards to eligible immigrants deemed likely to access public benefits. The Biden administration has faced similar challenges with a moratorium on deportations.

Civil and immigrant rights groups have argued that the implications of such injunctions are far-reaching and anti-democratic, making it nearly impossible for incoming administrations to reject previous policies they disagree with—and possibly campaigned on—and adopt new ones they believe to be in the public interest. In other words, it leaves presidents with their hands tied. “Individual judges may not like the policy choices of the Biden administration, but it is not their job to weigh in on that policy debate,” Karen Tumlin, founder and director of the immigrant rights nonprofit Justice Action Center wrote in a recent Newsweek opinion piece titled “The future of the executive branch is at stake in the Supreme Court.” A ruling in Biden v. Texas, she wrote, could limit “any future president’s ability to implement their national security and foreign policy agendas.” A group of former DHS officials who served under both Democratic and Republican administrations also noted the “deeply troubling consequences” for the power of the executive branch to manage the border and shape foreign policy.

5⃣ This case is an harbinger for whether Biden will be able to implement his agenda on immigration & other issues. Red states have created a playbook to challenge any effort by Biden to roll back Trump policies. The courts should not continue to allow a shadow Trump presidency.

In an amicus brief filed with the Supreme Court, attorneys with the Center for Immigration Law and Policy at UCLA asked the justices “to impose some much-needed restraint on this practice.” Monika Langarica, one of the counsels, told Mother Jones the lower court’s ruling reinstating the policy nationwide relied on “logical leaps.” She hopes the Supreme Court, even with its conservative supermajority, will reverse the decision and allow the Biden administration to continue to unwind MPP. But, even if it doesn’t, she noted, the justices could still rule the nationwide injunction was improperly issued and send it back to the lower court to be narrowed in scope to only apply to the states bringing the lawsuit, not the entire country. “None of us should want to live in a country where a few states can so easily dictate immigration policy for the whole nation,” Langarica wrote recently.

A decision on this case, Langarica told me, can have a “resounding effect on the ability of states like Texas to dictate federal immigration policy going forward,” including another controversial Trump-era border policy known as Title 42. In early April, the Biden administration announced it was ending the obscure policy that relied on a public health order to effectively seal off the southern border for most asylum seekers and migrants by May 23. The decision sparked an outcry from Republicans, who have seized on the policy to advance their anti-immigration agenda ahead of the midterms. Some Democrats facing competitive reelection races in the midterms, including Arizona’s Sen. Mark Kelly and Sen. Maggie Hassan in New Hampshire, have also voiced concerns about rescinding Title 42 “prematurely” and are backing a bipartisan bill to delay it. Biden is also facing opposition to Title 42 in the courts, where lawsuits from Texas and Arizona (joined by 20 other states) are trying to block its termination.

On Wednesday, one day after the Biden administration released a plan to manage the border while Title 42 is being phased out, a Trump-appointed federal judge in Louisiana issued a temporary restraining order preventing the government from discontinuing the policy.