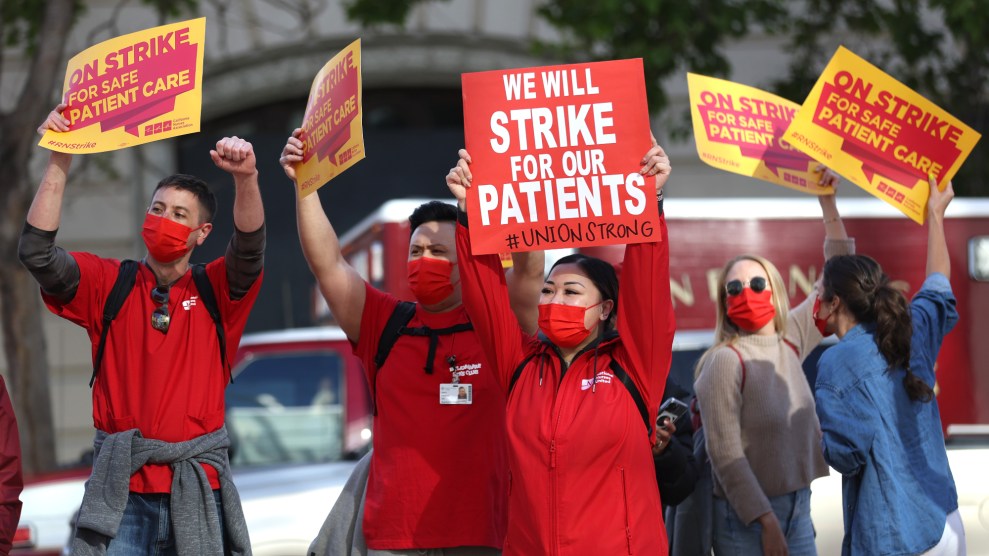 Over 8,000 registered nurses and health care workers with Sutter Health participated in a one-day strike on April 18th.Justin Sullivan/Getty Images

Nurses at Stanford Health Care and Lucile Packard Children’s Hospital are ready to exchange thermometers and scrubs for picket signs in a planned strike starting on April 25. To avoid burnout and to continue to offer care during the chaos of the pandemic, the nurses say they need more staff, better mental health resources, better pay, and more paid time-off. More than ninety percent of the 5,000 nurses who belong to the Committee for Recognition of Nursing Achievement (CRONA) union at the two hospitals voted for the strike.

Rather than cave to their demands, Stanford had another message for them: Be prepared to lose your health care. On April 15, right before the Easter weekend and amid Passover and Ramadan, Stanford Health Care announced that in addition to withholding pay, it would also be suspending health insurance benefits for striking nurses and their families beginning on May 1.

Stanford isn’t outside of its rights to withdraw health care from picketing nurses, but it hasn’t been a common practice during recent hospital strikes. Workers at another one of California’s largest medical providers, Cedars-Sinai, are planning an upcoming strike, and the provider has not threatened to revoke their health care. The workers striking at Cedars-Sinai include nursing assistants, transportation workers, surgical technicians, and others. Workers at 15 Sutter Health locations in California also participated in a one day strike on Monday.

Stripping nurses of their health care is a “bullying” intimidation tactic that targets some of the most vulnerable nurses, says Kathy Stormberg, vice president of CRONA. Without pay and health benefits, strikers are left to pay for care completely out of pocket through the federal COBRA program. “Targeting those among us with cancer or who are single moms is a really horrible look for a hospital,” she adds, though she said she didn’t think the intimidation tactic will have a significant effect on the number of nurses who plan to strike.

In an online petition urging Stanford Health Care not to cut benefits for the strike, CRONA members expressed their disappointment at the hospitals’ tactics, writing: “Instead of trying to address why 93% of eligible nurses voted to go on strike, the hospitals responded with this cruel move that’s clearly designed to punish nurses and break their resolve.” More than 25,000 people have signed the petition in just two days.

Dale E. Beatty, Stanford Health Care’s chief nurse executive, and Jesus Cepero, the chief nurse officer for Stanford Children’s Health, wrote in an emailed statement: “This standard practice is not unique to our hospitals and applies to any of our employees on unpaid status, including those who leave the hospital to transition to another job.”

Many nurses are particularly frustrated by the situation given that their employer does not appear to be hurting for cash. Stanford Health Care reported a $676 million operating surplus in 2021, along with a combined revenue of around $8.3 billion. Additionally, both hospitals have received over $630 million in federal coronavirus funding. “We don’t think that they’re holding off our benefits for a month as a cost-saving maneuver,” Stormberg says. “We don’t think it’s because they’re poor, or that ‘This is so horrible we need to save a few bucks, like here, let’s cut off their benefits.’”

With so many nurses on strike, the hospital will likely replace them with contract travel nurses. In an emailed statement, Dale and Cepero wrote that in the event the strike goes forward, “Stanford Health Care and the Lucile Packard Children’s Hospital are well prepared to continue to provide safe, quality health care to the communities that rely on us.” Stanford has doubled down that their staffing is adequate, but why then, Stormberg asks, are nurses being texted throughout their days off to come in and cover more shifts?

While revoking health care benefits is less common in hospital strikes, national employers in other fields have employed similar tactics. Both John Deere and Kellogg’s suspended health care benefits to striking workers in 2021. Earlier this year, Senators Sherrod Brown (D-OH) and Bob Casey (D-PA) introduced a federal bill that would make this practice illegal. In California, another bill has been introduced that would make it easier for workers to get affordable health insurance if theirs is terminated through a strike or work stoppage. Supporters of such legislation argue that even the threat of benefit termination forces workers to accept contracts that don’t really meet their needs.

Stormberg works as an RN in the radiology department, and is nearing her 19 year anniversary with Stanford Health Care. A strike is not how she saw herself celebrating the landmark, but she says that after 13 weeks of negotiations, she feels the nurses are out of options. “It’s not our goal to want to be on strike—we want to be back at the bedside taking care of the patients. But the hospitals have not heard us; they are not listening.”

That’s demoralizing for nurses who risked their lives throughout the most difficult and dangerous parts of the pandemic. As single mother and cancer nurse Rachel Gratz-Belen said in a recent press release, “I couldn’t be with my kids because I was showing up for my patients and showing up for the hospital. It’s just really disappointing to see the hospital do this to us right now.”