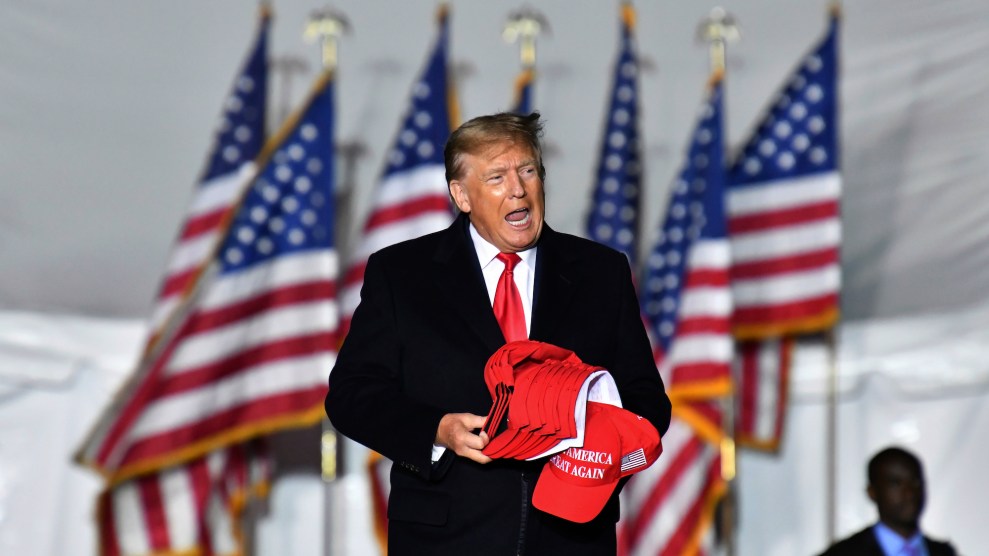 When Donald Trump announced he planned to launch his own social media platform—and eventually his own streaming and web-hosting MAGA-verse—his allies speculated it could launch him into another stratosphere of messaging power and wealth. The idea was to wed the former president’s new venture to a so-called “SPAC” (a Special Purpose Acquisition Company)—a publicly-traded empty shell of a corporation that would allow Trump to turn his digital empire into a virtual money machine.

It hasn’t worked out that way.

Since its launch in February, TruthSocial has seemed far more like vaporware than a serious competitor to Twitter or Facebook. Hundreds of thousands of users apparently remain on the waiting list to get in—despite the fact that last week it was reported that new downloads of the platform had fallen 93 percent from its launch, to just 60,000 per week. Hardly anyone wants to get on TruthSocial, and many of those who do want to apparently can’t. When they do get on, there’s very little content. Trump himself has “truthed” just once, back in February, in a short message promising he’d be there more often.

Over the weekend, Reuters reported the platform’s woes extend beyond its users and content—two top executives, who the news service reported were largely responsible for the technical underpinnings of the platform, have quit. And as anemic as the downloads are said to be, a version of TruthSocial isn’t even available yet for Android phones, which account for as many as 72 percent of smart phones worldwide, and 40 percent of smart phones in America.

Former congressman Devin Nunes—a Trump ally who was extraordinarily sensitive about people saying things he didn’t like on social media, to the point where he sued an anonymous Twitter user pretending to be a cow—promised the hiccups of the original rollout would be solved by March 31. But that didn’t happen.

Not surprisingly, stock prices for Digital World Acquisition Corporation (DWAC), the empty SPAC that Trump hopes to merge with his digital media company, have been sliding. Monday afternoon when the stock market closed, the stock was down to around $56 a share—still significantly higher than the $10 a share it launched at last fall, but far below the all-time high of $97.54 it hit just one month ago on March 4. The stock continued to plunge on Tuesday morning, heading in the direction of its lowest point since a potential merger with Trump was first announced back in November.

There’s still a lot of potential for Trump here—and potentially for a lot of other investors. DWAC hasn’t merged with Trump’s digital media company yet; if and when it does, Trump will probably control a fair number of shares and will have access to a potentially enormous amount of funding. Already, investors have pledged up to $1 billion to fund Trump’s media operation. But those ifs and whens are no small matters.

In December, DWAC revealed in a filing that it was under investigation by the Securities and Exchange Commission—for what, exactly, remains unclear. (In its filing revealing the investigation, the company pointed out that the investigation does not mean any particular findings have been reached.) But SPAC experts say the federal probe makes the eventual merger, and the investor funds that would come with it, less likely to happen anytime soon. One of DWAC’s early investors has also sued DWAC CEO Patrick Orlando, saying Orlando committed fraud in pushing him out of the corporation. The investor alleged that DWAC had been in discussions with Trump’s media group about setting up a merger before DWAC itself went public. A lawyer for Orlando denied the lawsuit’s allegations; Orlando has asked for a judge to approve arbitration in the dispute. Using a SPAC to take a company public helps avoid a lot of the red-tape and scrutiny that a traditional IPO would bring, something which would be a benefit to Trump. But one of the few hard rules is that the SPAC can’t coordinate with the company it eventually merges with until after the SPAC goes public. So if the fraud lawsuit has any truth to it, it could be a costly headache for Trump’s media empire.