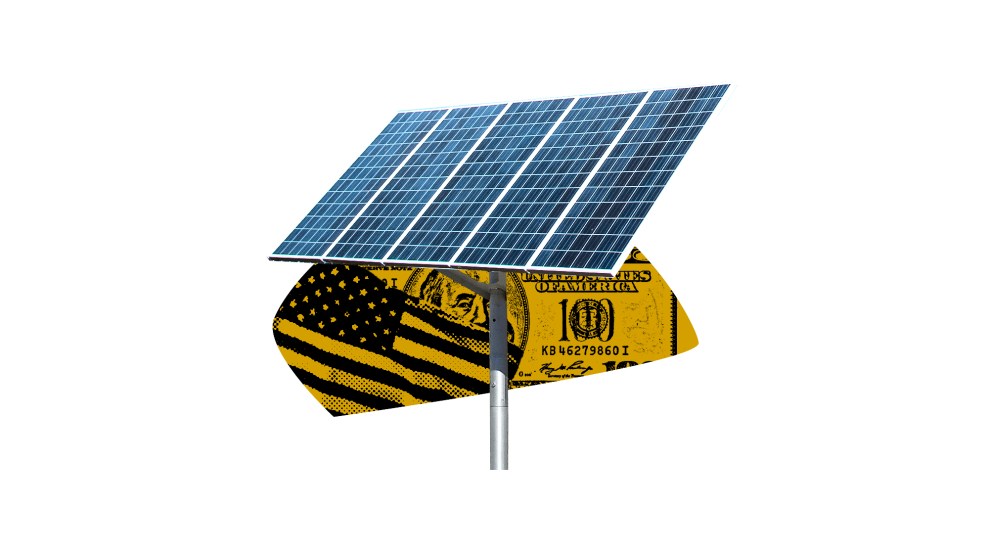 The economic theory behind solar tariffs is simple: Solar cells and panels made abroad are often cheaper, thanks to lower manufacturing costs and generous government subsidies from countries like China. So taxing imported panels should give the US solar industry a fighting chance at survival.

At least that has been the thinking over the last 10 years and under three different presidential administrations. There’s just one problem—the majority of the US solar industry has never supported them, arguing the tariffs have done nothing to bolster domestic production and have actually slowed the pace of decarbonization.

This contradiction has become abundantly clear over the last two months. In late March, the Biden administration quietly announced plans to investigate a complaint from a small solar manufacturer called Auxin Solar, which argued that Chinese firms are circumventing trade restrictions by manufacturing solar panels and cells in Southeast Asia.

The response from the US solar industry was swift. Trade groups called the investigation a “disaster,” “devastating,” and a move that would “effectively freeze” solar development at a time when more renewable energy sources are desperately needed. Eighty percent of the solar panels imported into the US come from Cambodia, Malaysia, Vietnam, and Thailand. If the investigation supports Auxin’s complaint, those countries would be subject to additional tariffs on imports to the US Earlier this month, a bipartisan group of 22 senators sent a letter urging President Joe Biden to quickly issue a preliminary finding, or risk “massive disruption” to solar companies unsure if prices for panels are about to skyrocket.

The US was projected to install around 27 gigawatts of solar capacity in 2022; now that number could be as low as 10 gigawatts.

Some negative consequences from the investigation have already come to pass. Two weeks ago, an Indiana utility announced that several solar projects had been delayed due to the upheaval in the market, and that as a result, two coal-fired power plants will now stay open until 2025, instead of 2023. The Solar Energy Industries Association, a trade group, estimates that 81 percent of solar installers in the US have seen shipments canceled or delayed. According to an analysis from the Oslo-based energy research firm Rystad, the US was estimated to install around 27 gigawatts of solar capacity in 2022; now that number could be as low as 10 gigawatts.

But the Auxin case is only the latest event to raise questions about the effectiveness of solar tariffs. The US has multiple layers of overlapping tariffs on solar panels manufactured in China, Southeast Asia, and most other foreign countries. At the same time, 86 percent of American solar jobs are in installing panels, not creating them. If tariffs increase the cost of the technology, they could slow growth and increase costs for the rest of the industry. Many analysts argue that tariffs are responsible for US solar prices being 43 to 57 percent higher than the global average.

President Biden has promised to cut emissions by 50 percent over the next eight years. That move would require an increase in solar capacity of 10 percent every year. If Biden—and the rest of the US—is serious about addressing climate change, are tariffs really the best option? And if not, can anything be done about them?

To understand US solar tariffs, you first have to understand the essential components of solar panels. Panels are made in four essential steps. First, chunks of polysilicone are melted at high temperatures into heavy, cylindrical blocks, or ingots; the ingots are sliced into thin sheets, called “wafers;” the wafers are then embellished with phosphorus and semiconductors to make solar cells. Finally, the cells are soldered together to make “modules”—better known as solar panels.

American scientists invented the solar cell, and for many years the US was a leader in manufacturing cells and solar panels. But in the 2000s, China, in an attempt to secure energy independence and dominate the renewable energy market, began to accelerate its solar industry, ramping up production of polysilicone and taking control of every level of its solar supply chain. (The country was also accused of providing unfair subsidies and utilizing forced labor.)

Prices for panels dropped precipitously. By the time the US instituted its first set of tariffs on imported panels and cells from China in 2012, during Obama’s presidency, domestic manufacturing had already plummeted, and some American producers had been forced out of the market. The solar start-up Solyndra, for example, went bankrupt in 2011. Installations, however, soared, thanks to the low-cost technology available abroad.

The 2012 tariffs were aimed specifically at China, then later expanded to include Taiwan. So-called “anti-dumping and countervailing duties” tariffs, they were intended to counteract the effects of Chinese subsidies for the solar industry. According to a decades-old trade law—the Tariff Act of 1930—the US is legally obligated to impose tariffs if there is evidence of unfair subsidies by foreign countries. “China is effectively a non-market economy,” said William Reinsch, a senior adviser at the Center for Strategic and International Studies (CSIS), in Washington, DC. “The concept is that you offset the harm that has been done.”

When President Donald Trump was in the White House (and waging a trade war with China), another set of tariffs was added—this time on imports of cells and modules from a much longer list of countries, including many in Southeast Asia. These “safeguard” tariffs were intended to step down every year until 2022; but in January, President Biden extended them for four more years, with a few key exemptions.

All these tariffs should be helping to boost solar manufacturing in the US, but many solar and trade experts claim they are doing nothing of the sort. “Tariffs have had no impact on creating solar manufacturing,” said Pol Lezcano, the lead North America solar analyst for BloombergNEF, a New York City-based energy research firm. “The only thing the tariffs have accomplished is to really bring costs up for everybody else.” According to the International Renewable Energy Agency, the cost of installing utility-scale solar in the US is among the highest in the world.

Other experts have argued that the tariffs were too little, too late. Varun Sivaram, a former senior research scholar at Columbia University and current member of the Biden administration, argued in 2018 that if a tax on imports had been put into place earlier than 2012, it could have helped “level the playing field.” “But if Obama’s tariffs closed the barn door after the horse bolted,” he wrote, “then Trump’s [2018] tariffs amount to putting a lock on the door.”

A key trade group argues that Trump’s—now Biden’s—“safeguard” tariffs have cost the solar industry 62,000 jobs and some 10.5 gigawatts of installed capacity.

There is evidence that the tariffs did boost panel assembly in the US, even if they didn’t boost the manufacturing of solar cells themselves. “There was a large increase in PV module assembly,” said David Feldman, a researcher at the National Renewable Energy Laboratory in Washington, DC. Companies from South Korea and China, Feldman explained, set up assembly plants in the US, even though the cells they were using were imported from abroad.

But Lezcano argues that the increase in the US’s assembly capacity—from 1 gigawatt to approximately 5 gigawatts over the past decade—doesn’t come close to what is needed to meet the country’s projected demand. “Module assembly in the US is very small and supplies mostly small-scale solar projects,” he said.

The Solar Energy Industries Association, which has been an outspoken opponent of the solar tariffs, argues that Trump’s—and now Biden’s—“safeguard” tariffs alone have cost the industry 62,000 jobs and an estimated 10.5 gigawatts of installed solar panels. (That’s about 8.5 percent of the entire installed solar capacity in the country today.) “There’s now more than a decade of evidence proving that tariffs do not encourage US solar manufacturing,” Abigail Ross Hopper, president and CEO of the association, said via email. “Even after multiple layers of tariffs over the years, the United States solar manufacturing sector has failed to meet domestic demand for solar equipment.”

Some members of the industry do support the tariffs: Auxin Solar, for example, is among a handful of manufacturers that have filed trade complaints. These companies argue that American solar manufacturing is critical to the industry. “We are grateful Commerce officials recognized the need to investigate this pervasive backdoor dumping and how it continues to injure American solar producers,” Mamun Rashid, the CEO of Auxin Solar, said in a statement.

In recent weeks, many of the complaints about the Auxin investigation—and solar tariffs in general—have been targeted at the Biden administration. The Department of Commerce is responsible for investigating the complaint and determining a response. But according to Reinsch, the Biden administration has little leeway in how the US levies tariffs; those decisions are baked into national trade law. “The law is not optional,” he said.

But some have begun to suggest other ways around the tariffs. Emily Benson, an associate fellow at CSIS, argues that Congress could pass a law that would limit the executive branch’s ability to levy tariffs on goods needed to quickly transition to clean energy. “It’s in our best interest to achieve one ultimate goal, which is a reduction of emissions,” she said. Allowing coal plants to remain on the grid as investigations are resolved, she argued, “is, from a climate perspective, not something we can afford.”

Bills to repeal solar tariffs are already floating around in Congress. Sens. Jacky Rosen (D-NV) and Jerry Moran (R-KS) introduced a bill in mid-February that would repeal the 2018 “safeguard” tariffs and also create a Department of Energy program to encourage domestic solar manufacturing. “Solar tariffs are hurting America’s clean energy economy,” Rosen said in a statement.

Benson understands that, for many trade experts, the idea of carving out an exemption from tariffs might seem radical. But she argues that the urgency of the situation may make it necessary. “Are the trade rules we have today suited to combat climate change?” she said. “That’s the very heart of the question.”