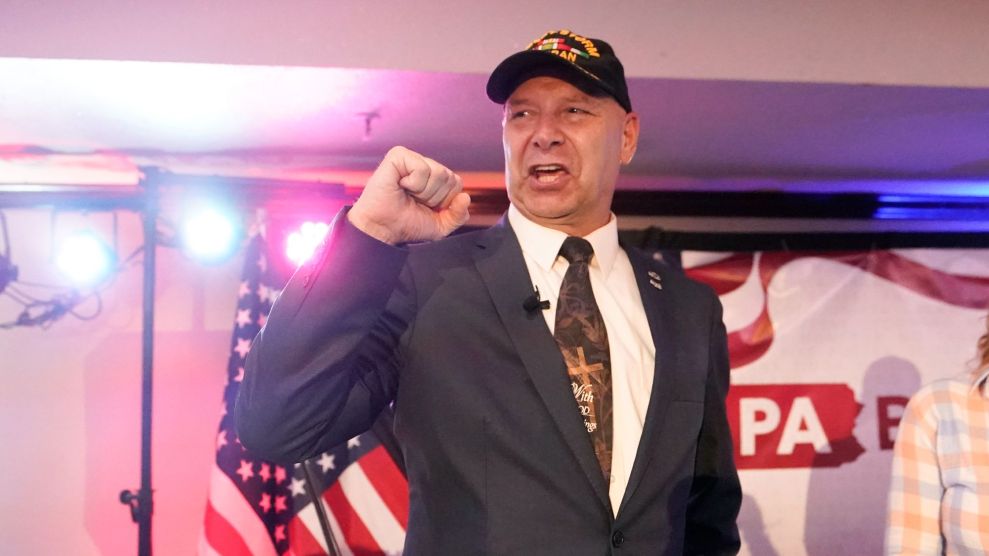 Doug Mastriano, a far-right supporter of former President Donald Trump’s efforts to overturn the presidential election, has won the Republican primary for Pennsylvania Governor, moving the country a step closer to what could be a potential nightmare scenario in 2024.

To ascend to the governor’s seat, Mastriano still has to win what’s expected to be a fierce general election battle against Democratic nominee Josh Shapiro, the state’s attorney general. But Mastriano’s victory over a pack of Pennsylvania Republicans dramatically raises the stakes of the November contest. The Pennsylvania governor appoints the secretary of state, the official responsible for certifying presidential election results in the state. As Greg Sargent argued in the Washington Post, Mastriano could appoint a secretary of state who, amid baseless allegations of election fraud, certifies a losing GOP candidate as the victor of Pennsylvania. This certification would then be sent to Mastriano, who could forward it on to what might be a Republican-leaning Congress helmed by Rep. Kevin McCarthy.

“What must be conveyed clearly and unflinchingly is this: If Mastriano wins the general election, there is almost certainly no chance that a Democratic presidential candidate’s victory in Pennsylvania in 2024 will be certified by the state’s governor,” Sargent wrote.

Saying that Doug Mastriano was pro-coup in 2020 doesn’t quite cut it. He spoke derisively of the “myth of the separation of church and state” at a QAnon conference. He was at the Capitol on January 6, though there’s no evidence he went inside the building, and he hasn’t been accused of a crime.

Most worryingly, he has explicitly endorsed the radical notion that state legislatures have the legal authority to override the popular vote.

There is mounting evidence that the PA presidential election was compromised.  If this is the case, under Article II, Section 1.2 of the US Constitution, the state legislature has the sole authority to direct the manner of selecting delegates to the Electoral College. (1)

All of this has landed Mastriano the Trump stamp of approval. “There is no one in Pennsylvania who has done more, or fought harder, for Election Integrity than State Senator Doug Mastriano,” the former president said in a statement. “He has revealed the Deceit, Corruption, and outright Theft of the 2020 Presidential Election, and will do something about it.”

But Mastriano is so extreme that, according to Politico, prominent Pennsylvania Republicans mounted a last-ditch attempt to frustrate his victory—not because of his anti-democracy politics but because they fear he’ll lose the general election against Shapiro. Some Democrats, on the other hand, seem giddy at the prospect of a Mastriano victory. With the wind blowing in the GOP’s favor, many liberal strategists seem to believe that running against an anti-democracy extremist like Mastriano will maximize their chances for victory. Vice reported that the Democratic Governor’s Association even ran ads that could boost Mastriano’s chances in the primary.

But if there’s one lesson we can draw from 2016 and all that followed, it’s this: Be careful what you wish for.