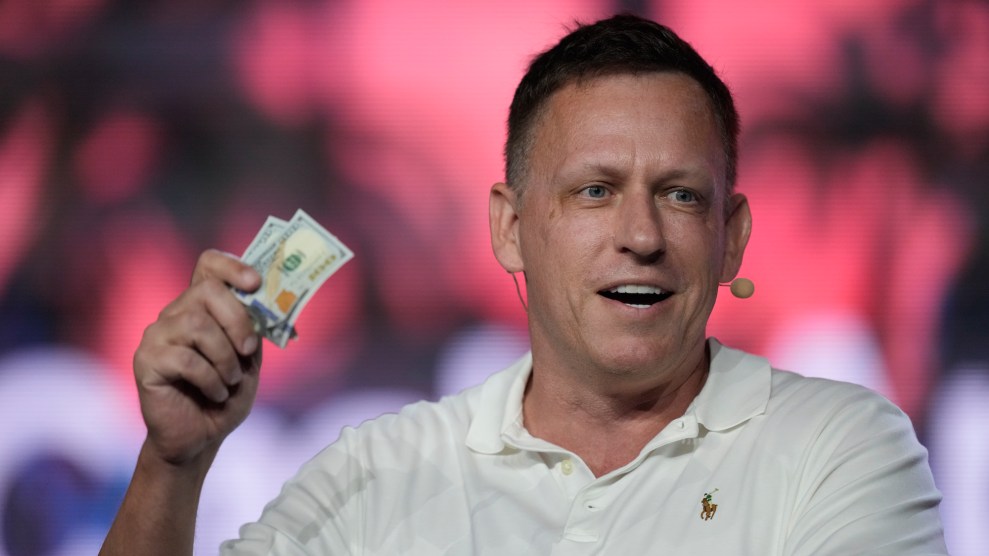 Peter Thiel, co-founder of PayPal and Palantir, offers a pair of hundred dollar bills to attendees, to help make a point about the poor longterm value of cash, during a keynote address at the Bitcoin Conference last month in Miami Beach.Rebecca Blackwell/AP

In 2011, Peter Thiel paid $27 million for a home in Maui. In 2022, the billionaire entrepreneur and investor is on track to get a US Senate seat for his friend and former employee, J.D. Vance, for roughly half that. It might be the best deal he’s gotten since acquiring a sizable chunk of Facebook for $500,000 in 2004.

Vance is now the favorite to become Ohio’s next senator after winning Tuesday’s competitive Republican primary. He’d been trailing in the polls but shot to the top after a late endorsement from Donald Trump. Thiel was with him every step of the way.

The PayPal co-founder announced that he was putting $10 million into a super-PAC backing Vance’s Ohio Senate bid before Vance even got into the race. He went on to give another $5 million to the super-PAC. The group functioned as a shadow campaign for Vance by conducting polling, funneling people to his events, and hiring staff that later joined Vance’s official campaign, the New York Times reported.

But money was not Thiel’s most important contribution to Vance’s campaign. He was instrumental in getting Trump to forgive Vance’s vocal Never Trumpism during the 2016 election. Last year, Thiel and Donald Trump Jr. joined Vance for a meeting with the former president at Mar-a-Lago, Politico reported. With Thiel’s help, Vance was able to convince Trump that he’d be one of the Senate’s strongest supporters of the MAGA agenda.

Like any good venture capitalist, Thiel has pull with Trump not because he spent big but because he invested early.

Like any good venture capitalist, Thiel has pull with Trump not because he spent big but because he invested early. During the 2016 campaign, he was Trump’s biggest backer in Silicon Valley and spoke in a key slot at the Republican National Convention. He went on to donate $1.25 million to support Trump while others were fleeing in the wake of the Access Hollywood tape.

Vance has said that a lecture Thiel delivered in 2011 was one of the most important moments of his time at Yale Law School. He went on to briefly work for one of Thiel’s investment firms before starting a venture capital firm of his own with support from his old boss. Thiel chose not to have any involvement with the super-PAC he’d funneled $15 million into so that he could continue to advise Vance during the campaign without violating election laws, according to the Times.

Thiel has also spent $10 million on a super-PAC supporting the Arizona Senate candidacy of his former chief operating officer, Blake Masters. Unlike Vance, Masters was an early Trump supporter and worked on his 2016 transition team. It’s hard to imagine Trump endorsing Vance, but not Masters. Neither of them would have stood a chance without Thiel’s money and connections to Trump.

What Thiel hopes this will get him over the long term is a far more complicated question. For years, the billionaire has been happy to work from behind the scenes while only hinting at what he may be trying to accomplish. But one thing that has long been clear is that he holds democracy in low regard. As Thiel put it in a 2009 essay, “I no longer believe that freedom and democracy are compatible.”

There’s now a good chance that the man who holds that view will soon have two of his former employees serving in the Senate. It may end up costing him less than one of his many houses. Freedom isn’t free for Thiel, but it’s not that expensive either.