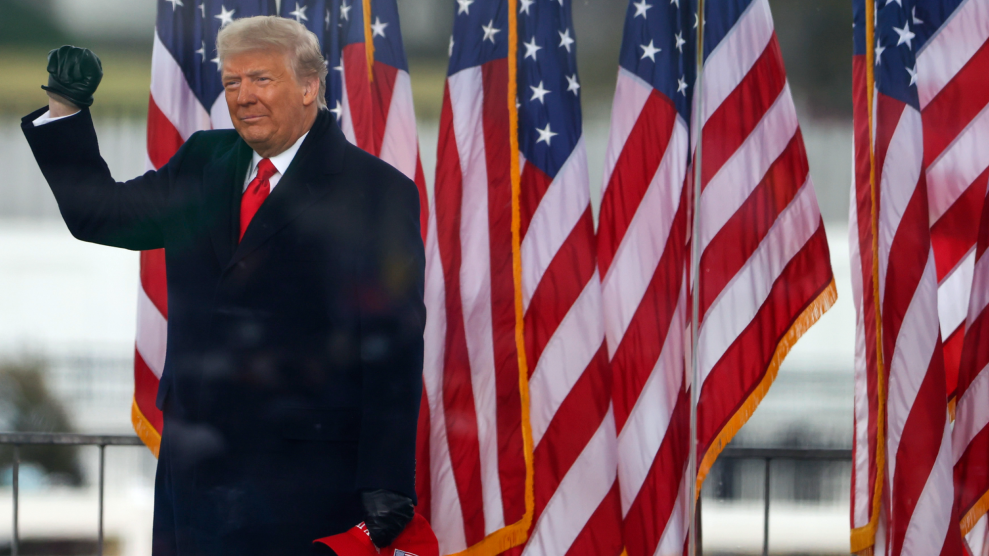 Donald Trump arrives at a rally on January 06, 2021.Tasos Katopodis/Getty

As MAGA world scrambled in November 2020 to concoct claims that the presidential election had been stolen, a business associate of Mike Lindell—the MyPillow executive promoting outlandish conspiracy theories—circulated an especially extreme proposal: a draft executive order that would have empowered armed Trump supporters to seize voting data and conduct investigations of supposed “election tampering.”

The proposal, obtained by Mother Jones, identified three individuals who would be granted this power. Two were associates of former national security adviser Michael Flynn: retired Army Colonel Philip Waldron and Texas businessman Russell Ramsland. Waldron and Ramsland, at the time, were working closely with Flynn and lawyer Sidney Powell to promote the unsubstantiated and loony allegation that the Chinese Communist Party, in cahoots with billionaire George Soros and an array of other actors around the globe, had rigged US voting machines to throw the presidency to Joe Biden.

Trump supporters would “be granted the authority to be armed when conducting these investigations.”

It is unclear how far this proposal got; Trump never implemented it. But it’s an indicator of just how bizarre the effort to overturn the election was. The draft order was shared among a group of Trump backers organized by Powell, who was concocting conspiracy theories and developing implausible legal strategies to keep Trump in power. In a now infamous December 18, 2020, Oval Office meeting, Powell and Flynn reportedly pressed Trump to issue an executive order allowing either the military or a civilian agency to seize voting machines. Public reporting indicates that Ramsland and Waldron helped to formulate this proposal. But the idea may have taken at least some inspiration from the separate draft executive order distributed by Andrew Whitney, the Lindell associate.

Whitney, a British pharmaceutical entrepreneur, had recently gained some notoriety by encouraging Trump to embrace an oleander-based treatment that Whitney claimed could “cure” Covid in two days.

The draft order includes a bracketed space reserved for “language to convey the authority of the Office of President of the United States of America.” Then it says: “Due to compelling evidence of election tampering,” three individuals and their companies would have authority to “actively research, physically obtain and/or remotely retrieve, and further retain in a 3rd Party protected data storage site all data and/or code regarding US election fraud, election manipulation, voter fraud, election interference, voter eligibility, and election systems wherever it resides.”

“These individuals,” the order adds, will “be granted the authority to be armed when conducting these investigations since most of the operations would be conducted under hostile conditions.” It also says the US Marshals or other law enforcement “shall be seconded to the teams sent into the field” to seize data.

Two of the three figures who the order would have tasked with carrying out this plan have since become well known for their post-election machinations. Waldron, who runs Rising Tide Services LLC, created an infamous PowerPoint presentation that urged Trump to declare a national emergency in order to remain in office. Waldron has said he spoke to White House Chief of Staff Mark Meadows “eight to 10 times.” Ramsland ran a firm called Allied Security Operations, which claimed to offer clients a combination of cyber and physical security services and which Ramsland has said supplied research to Powell and Trump attorney Rudy Giuliani. Neither Waldron nor Ramsland responded to requests for comment.

The third individual named in the draft order told Mother Jones that he had nothing to do with this proposal and was unaware of its existence and uninvolved in the efforts to overturn the election.

The draft was sent from a ProtonMail address that belongs to Whitney, according to people who corresponded with him. It’s not clear if Whitney actually wrote it. He didn’t respond to inquires. The document was sent to Jim Penrose, whose online bio says he used to work for the National Security Agency, and who was working closely with Flynn at the time. It was also sent to Doug Logan, the head of a cybersecurity firm, Cyber Ninjas, that was later involved in a so-called audit of Arizona’s election results.

Whitney, Penrose, and Logan were part of a group of Trump backers who assembled in mid-November 2020 at a property purchased earlier that year by Lin Wood, a prominent trial lawyer who has embraced pro-Trump conspiracy theories, including QAnon. Led by Powell, the group, which also included Flynn and Overstock founder Patrick Byrne, used the estate—called the Tomotley Plantation—to plot legal efforts to keep Trump in office.

It is not clear who else, if anyone, ultimately saw the draft order that Whitney sent to Penrose and Logan. But the email, according to sources involved, was an early part of a process in which numerous people working with Powell, including the group on Wood’s property, workshopped radical proposals that eventually reached Trump, in altered form. “Pretty much everybody who was in Sidney’s orbit was involved in the drafting of some of this stuff,” one person involved in the efforts said.

Various media outlets have reported on draft executive orders linked to efforts to encourage Trump to try to seize voting machines. One proposal reportedly would have used the Homeland Security Department, not the Pentagon; Trump, according to the New York Times, was open to the idea. But other Trump advisers, including White House Counsel Pat Cippolone and even Giuliani, reportedly blocked it. The former New York mayor reputedly said that “we would all end up in prison” if Trump signed an order allowing the military to confiscate machines.

Wood, who has since turned against most of his former guests, claimed in an interview that Whitney had come to his property in the second week of November 2020 not to participate in the election fraud crusade, but to promote oleandrin, his supposed Covid cure. The Washington Post reported last year that Whitney won support for this product from HUD Secretary Ben Carson and Lindell and was able to secure a White House meeting about it with Trump in July 2020. Lindell, who, according Axios, invested in a company that develops the drug, later claimed that Trump had said during the meeting that “the FDA should be approving” the product. (It didn’t.)

Whitney had previously pitched oleandrin to a series of conservative pundits. John Solomon, the right-leaning former Hill columnist who helped Giuliani push false claims about Joe Biden and Ukraine in 2019, gave the product a puffy write-up. Whitney also hawked it on the show of pro-Trump live-streamers Diamond and Silk.

But in November 2020, Whitney found a new focus. In a four-page memo he sent to Wood on November 18, titled “Their Plan Revealed,” Whitney speculated that the left, which he referred to as “the Communists,” would use violence and possible collaboration with “armed foreign elements” from “China, Venezuela and Cuba” to retain power in the United States. He also predicted that they would engineer a stock market crash, “a second pandemic,” or an electrical grid failure to distract from Trump’s efforts to expose election fraud. To stop this, Whitney urged Trump to take a series of executive actions, including pardoning WikiLeaks founder Julian Assange, declassifying “all documents on Russiagate,” and ordering the “immediate arrests of violent activists, enablers (BLM, ANTIFA, others).”

“Can we get this to Sidney, and Gen Flynn, or POTUS directly?” Whitney asked Wood in an email.

Wood told me he doesn’t think he complied. “I doubt that I did anything with that, including bothering to read it,” Wood said.