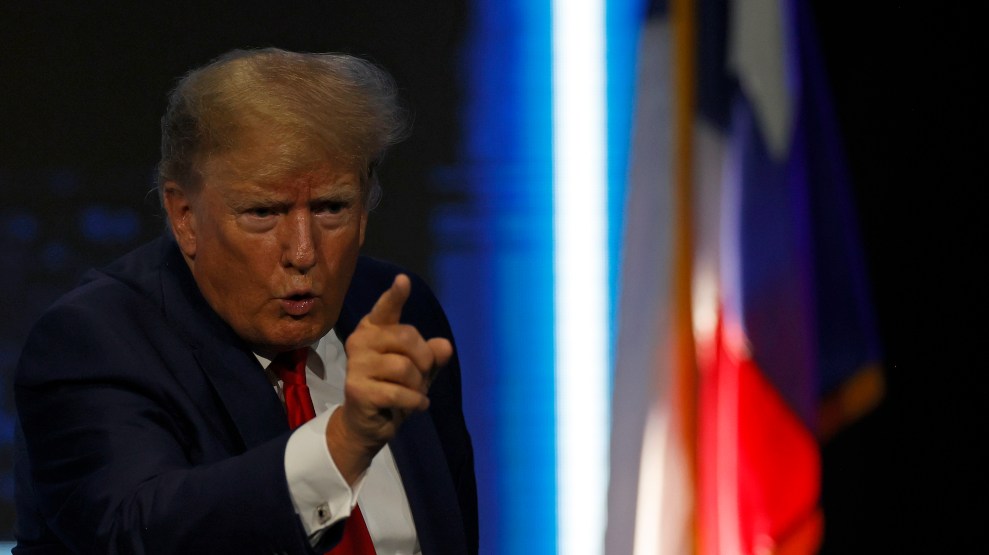 Investigators with the Securities and Exchange Commission are expanding their probe into the plan to take Donald Trump’s social media startup public—news that could indefinitely delay, or even completely derail, what’s supposed to be an enormous payday for the former president.

Last year, Trump announced the creation of Trump Media & Technology Group, which he said would be an alternative to “woke” Silicon Valley companies like Twitter, Facebook, Netflix, and Amazon, which he believes are unfairly persecuting MAGA world. The new company’s first, and so far only, product is Truth Social, a Twitter look-a-like with 3 million users. While other social media company founders have become enormously rich by taking their companies public, Trump has skipped the traditional method of doing an initial public offering—which requires time, a lot of work, and scrutiny of the company—by opting instead to merge with what is known as a special purpose acquisition company, or SPAC. A SPAC is essentially an empty shell of company that is already public—it merges with a company like Trump’s TMTG, and voila, Truth Social will be publicly traded and Trump potentially a much, much wealthier man.

Trump’s proposed partner is a company called Digital World Acquisition Corp, which went public last fall at $10 a share and subsequently rocketed to $97.54 after the planned merger with Trump’s start-up was announced. Enthusiasm for the stock came in large part from retail investors, excited by the idea of monetizing the social media power Trump once exerted through his Twitter account. But Truth Social’s rollout has been painfully slow, hobbled by technical glitches. Trump himself didn’t start to use the platform until last month. And in December, DWAC disclosed to its investors that the SEC and the Financial Industry Regulatory Authority (FINRA) had both begun investigating DWACs origins.

But word of that investigation didn’t take much shine off of the company’s stock price. DWAC hit its highest share price well after the the probe became public. Many investors reasoned, accurately, that the presence of an investigation doesn’t necessarily mean much, since any investigation, no matter how serious, must be disclosed. But the question has dangled over the company ever since. And on Monday, DWAC revealed that it had received additional subpoenas from the SEC asking for even more documents, indicating that this probe is not about to go away, and may, in fact, be quite serious.

In a filing on Monday, DWAC disclosed the expanding investigation, which is being conducted under a provision of securities law known as “Section 8(e),” and said the SEC is looking at information included in its “registration statement”—essentially the company’s prospectus for investors.

“Any resolution of the investigation could result in the imposition of significant penalties, injunctions, prohibitions on the conduct of Digital World’s business, damage to its reputation and other sanctions against Digital World,” the filing notes. “In addition, the Section 8(e) order of examination of the Registration Statement can be expected to delay effectiveness of the Registration Statement, which could materially delay, materially impede, or prevent the consummation of the Business Combination.”

Specifically, the SEC appears to be investigating how much of a relationship DWAC may have had with Trump and his social media company before the plan to merge the two companies together was publicly announced. The whole idea of a SPAC is that it merges two completely separate entities—they can’t coordinate before the SPAC goes public. Investigators appear to be suspicious that some coordination may have occurred. As we explained in December, when the investigation was first announced:

When a normal company goes public, it has a purpose—a business plan or a product—and investors get to look at the business and decide whether it’s something worth buying. But that’s a long arduous process that involves quite a bit of scrutiny. A SPAC, on the other hand, is a publicly traded company that can be launched quickly and easily into the market, where it will eventually find a business to acquire—but it’s not allowed to have a preexisting plan to merge with a specific company. In October, however, the New York Times reported that Patrick Orlando, the CEO of DWAC, had met with representatives of Trump about his proposed media idea as far back as April—despite the fact that DWAC did not go public until Sept. 3. Representatives of TMTG told the Times that the conversations were about a potential partnership between Trump and another SPAC that Orlando also was the CEO of, and were not related to DWAC’s involvement with Trump.

DWAC has denied any improper activity, but investors seem even more nervy than before—by mid-day on Monday, DWAC’s stock had dropped more than 13 percent to around $38, nearing its lowest point since launching last year.