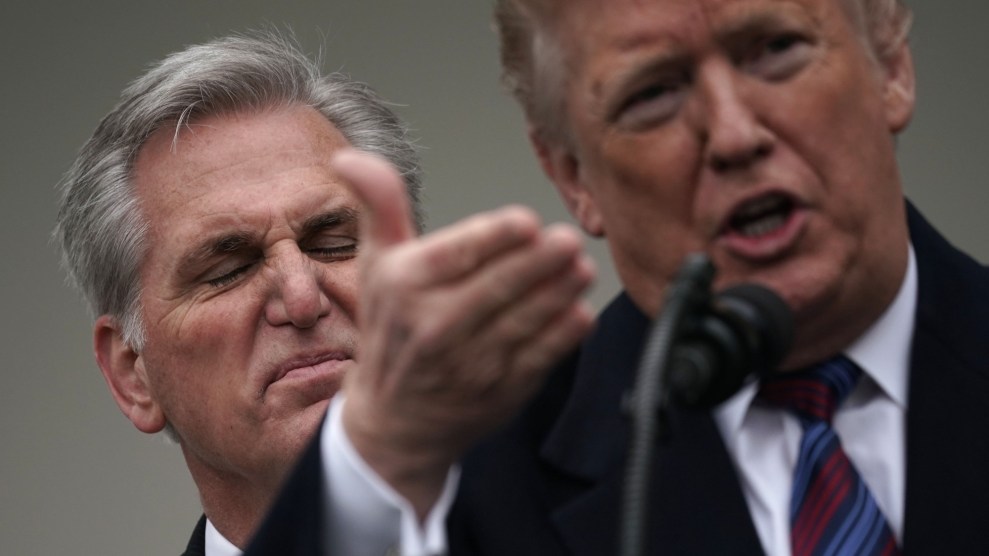 In April, the New York Times revealed that Kevin McCarthy, the House Minority Leader, had told Republican colleagues he planned to ask then-President Donald Trump to resign over his incitement of the January 6 attack on the Capitol.

McCarthy denied the Times report, prompting the reporters’ to reveal audio tapes confirming their story, and revealing him to be a bald-faced liar. That may have embarrassed McCarthy, but it hasn’t hurt his odds of becoming the next Speaker of the House. Nor did it cost him Trump’s support.

Trump endorsed McCarthy on Saturday via his social media site, Truth Social: “He is working incredibly hard to Stop Inflation, Deliver Water Solutions, and Hold Joe Biden and Nancy Pelosi Accountable for their catastrophic failures and dereliction of duty,” he wrote.

This endorsement, though nominally related to McCarthy’s reelection bid in California, could prove helpful to McCarthy’s effort to line up right-wing support for a Speaker bid should the Republicans take over the House next year, as they are favored to do.

McCarthy, eager to please Trump’s base, has worked to undermine the Jan. 6 panel and has indicated he will kill it if he becomes House Speaker.

Perhaps not coincidently, Trump’s public support for McCarthy comes just days before the House select committee investigating the Jan. 6 attack is set to hold the first in a series of highly anticipated televised hearings on the rioting, and Trump’s unprecedented effort to use false claims of election fraud to keep himself in office. McCarthy, eager to retain support of GOP voters still loyal to Trump has worked to undermine the bipartisan panel, and has indicated he will kill it if he ends up serving as House Speaker.

In a January 13, 2021 speech, McCarthy said: “The president bears responsibility for Wednesday’s attack on Congress by mob rioters. He should have immediately denounced the mob when he saw what was unfolding.”

But when the base stuck with Trump, McCarthy, who did not actually ask him to resign, raced to get back in line. He flew to Mar-a-Lago and got a picture that Trump distributed. McCarthy refused to support the formation of a bipartisan commission to investigate the insurrection. He subsequently attacked as partisan the select committee created by House Speaker Nancy Pelosi, and stripped Rep. Liz Cheney (R-Wyo.) of her leadership position after she agreed to serve as one of committee’s two Republicans.

“President Trump has agreed to work with Leader McCarthy on helping the Republican party to become a majority in the house.” pic.twitter.com/aTwUW1nAuB

Trump has previously made clear that his support for McCarthy is a direct reward for fealty—for his rapid retreat from faulting Trump for January 6. “I didn’t like the call,” Trump told the Wall Street Journal, referring to the recorded phone call the Times had revealed. “But almost immediately, as you know, because he came here [Mar-a-Lago] and we took a picture right there—you know, the support was very strong.”

Trump and McCarthy seem to have struck a deal: McCarthy refrains from faulting Trump from attempting a coup, or for inciting an attack that endangered his congressional colleagues and Vice President Mike Pence. In exchange, McCarthy gets Trump’s “complete and total endorsement.” Hope it’s worth it.