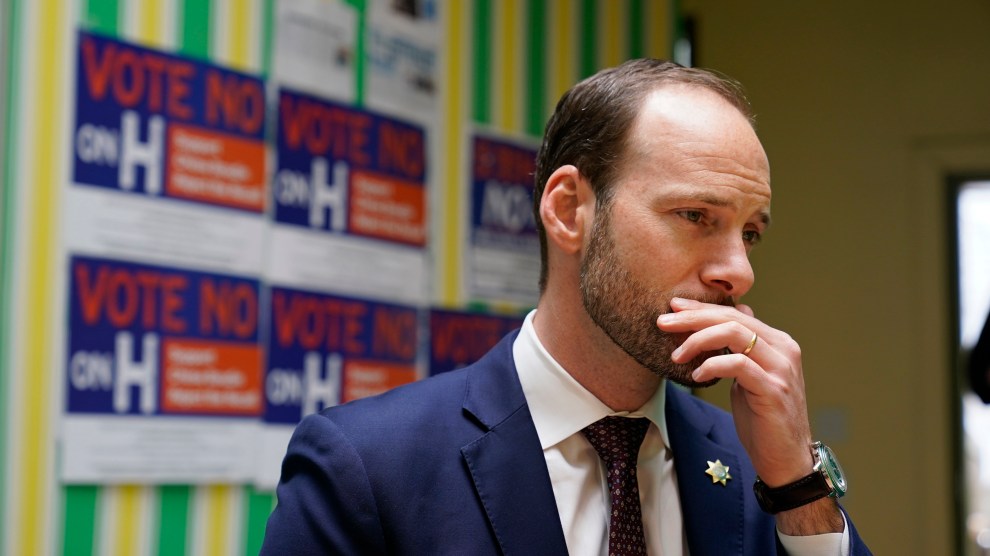 With 45 percent of the expected votes counted and Boudin trailing by about 23 percentage points, Boudin conceded defeat around 9:30 p.m. “This was never about one vote count. It was never about one election night party. This is a movement, not a moment in history,” he told a crowd of his supporters, according to New York Times reporter Thomas Fuller.

Boudin, a former public defender, took office in 2020. He was elected with endorsements from progressive heavyweights like Vermont Sen. Bernie Sanders, and was one of numerous reform-minded district attorneys around the country who pledged to reimagine the role of prosecutors by rolling back mass incarceration, holding violent police officers accountable, and limiting racial injustices in the criminal legal system.

But he soon became a target for tough-on-crime critics who, in several cities, have sought to oust those very same district attorneys.

In all these places, “people are using fear narratives to paint a picture that reform and safety are opposite,” Akhi Johnson, a former prosecutor who now works at the Vera Institute of Justice, a think tank, told me recently. Progressive chief prosecutors in Los Angles, Chicago, and multiple districts in Virginia have faced recall proposals recently. But so far, Boudin is the only one to go down in the fight. “The pushback is becoming organized and targeted,” Jamila Hodge, an attorney who now helps lead the criminal justice reform group Equal Justice USA, told me last year as the recall effort against Boudin was getting off the ground. “It scares me that we’re seeing it get to this level.”

Boudin earned national attention during his election in 2019 in part because of his family’s background. His parents, both members of the Weather Underground, received lengthy prison sentences for their role in the 1981 Brink’s heist. Their incarceration shaped Boudin’s childhood and helped inform his beliefs about the criminal justice system. After becoming a public defender, he ran for district attorney with the goal of reducing mass incarceration. A couple of weeks after taking office, he announced that his team would no longer request cash bail for defendants, because he said the bail system unfairly jailed low-income people. For some low-level crimes, he began diverting more offenders to alternative programs like mental health and substance abuse treatment. He also promised not to pursue the death penalty or to prosecute juveniles as adults.

His opponents, financed partly by a Republican billionaire and venture capitalists, argued that his policies made the city less safe. “It’s turned into Escape From New York, Gotham City-level chaos here,” Jason Calacanis, an angel investor for Robinhood and Uber who supported the recall, said in 2021 on a podcast he co-hosts. The data does not support those claims: As I previously reported, overall crime is down in San Francisco, and the city has a relatively low homicide rate compared with other places of a similar size. Property crimes, which rose during the first year of the pandemic, are generally moving back toward more normal levels, with some exceptions like car thefts.

But regardless of the numbers, Boudin’s opponents have pointed to specific high-profile incidents as a way to bolster their case that the district attorney has failed to keep people safe: After a parolee named Troy McAlister killed two women during a hit-and-run on New Year’s Eve 2020, some residents blamed Boudin’s office, which previously referred McAlister to parole agents rather than filing new charges after some of the man’s prior arrests. Other San Franciscans argue Boudin has not done enough to hold perpetrators accountable for violent attacks against Asian American elders in the city.

“Anytime someone is trying to change a system, there’s resistance to it.”

The concerns about crime appear to have swayed many among San Francisco’s Democratic base. Over the past few months, polls showed that between 48 and 68 percent of voters in the city supported ousting Boudin from office. Some of these residents may be reacting to visible changes across San Francisco’s landscape during the pandemic, as the public health crisis amplified existing problems around poverty, substance abuse, and mental illness. As viral videos spread last year of sprawling homeless encampments, smash-and-grab robberies, and open-air drug use, Boudin and other San Francisco leaders came under intense scrutiny. “Mr. Boudin has actually planned to allow mayhem on San Francisco’s streets and in our homes,” Richie Greenberg, a 2018 Republican mayoral candidate who supported the recall, wrote in 2021. “He schemes to vastly favor criminals over law-abiding citizens.”

“Anytime someone is trying to change a system, there’s resistance to it,” the Vera Institute’s Johnson says of Boudin’s critics. The district attorney has faced pushback not only from the city’s police union, which described him during his 2019 campaign as the “#1 choice of criminals and gang members,” but also from Mayor London Breed, who has been openly critical of him in the media.

As numerous columnists and reporters have pointed out, there’s no evidence that Boudin was responsible for shifting crime rates in San Francisco during the pandemic. Homicides, for example, spiked almost universally around the country during 2020, in red and blue states alike. Boudin’s office is also just one piece of a complicated legal system: The city’s police department has been arresting far fewer people than it used to, with its lowest clearance rate in a decade.

But Boudin became an easy scapegoat for violence that academics have struggled to explain. “We have no idea why homicide rates are rising as much as they did across the country, and it’s scaring people,” Jennifer Doleac, an associate economics professor at Texas A&M who has studied crime rates, told me recently. “In a context like that where we don’t have good answers yet about why this is happening or what to do about it, it’s natural for people to start grabbing at anything that seems like it could be a good explanation. That doesn’t mean it actually is the explanation, and that often leads us down unproductive paths.” Tinisch Hollins, a lifelong San Francisco resident who helps lead the advocacy group Californians for Safety and Justice, which does not endorse or oppose political candidates, told me last year that she viewed the anti-Boudin recall campaign as a backlash to the Black Lives Matter and defund-police movements that gained momentum after the murder of George Floyd.

With Boudin out, Mayor Breed is tasked with naming his temporary replacement. She previously declined to comment on who she might pick, but the San Francisco Chronicle recently highlighted some of the possible candidates, including Catherine Stefani, a moderate Democrat on San Francisco’s Board of Supervisors and the first elected official to publicly support the recall. Whoever replaces Boudin will serve until an election in November.

It’s unclear whether San Francisco’s recall campaign could have a chilling effect for other reformist district attorneys beyond the Bay Area or California, or whether it might influence how Democratic politicians talk about crime ahead of the midterms. The Vera Institute’s Johnson doesn’t see Boudin’s ousting as a harbinger for things to come. “DA Boudin’s recall is an anomaly,” he told me. “Several reform prosecutors across the country have withstood challenges, and more prosecutors than ever are exploring reforms.” Still, Johnson acknowledged, “a few high-profile cases can shape perceptions, and that will remain a challenge for the movement.”