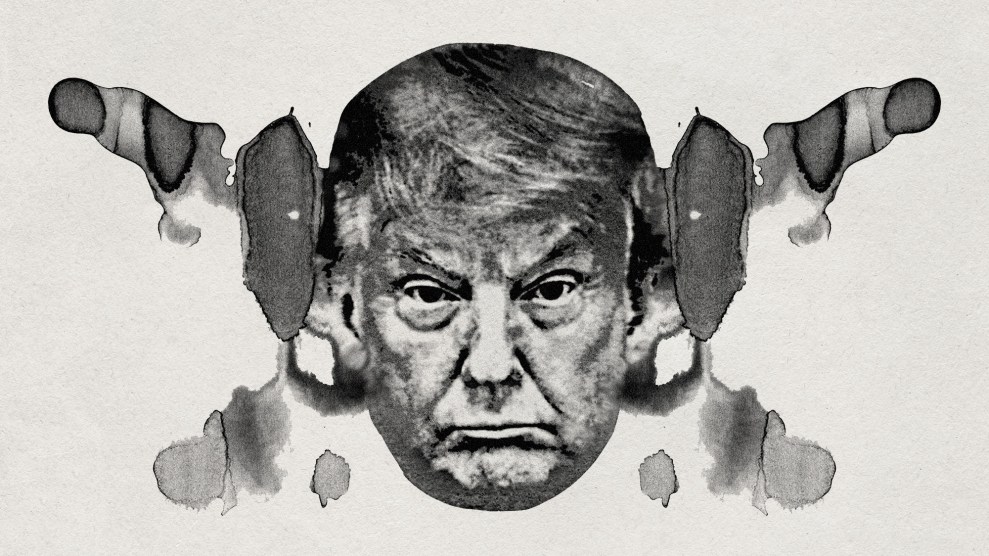 One key mission for the House committee investigating the January 6 riot is affirming reality and highlighting the obvious: The 2020 election was not rigged to steal victory from Donald Trump. The committee’s hearings that began last week and continue until next week are unlikely to persuade Trump cultists that Trump’s Big Lie is a big lie. But there is great value in showing reality-based Americans a full and coherent picture of Trump’s efforts to overturn the election, which led to the insurrectionist riot at the Capitol. Even though Trump’s sham crusade—which has been embraced by the Republican Party, the conservative movement, and right-wing media—is predicated on bogus and disproven claims, it deserves an official pushback, and the January 6 committee focused on that task during its hearing on Monday. In doing so, the committee raised a significant question: Is Trump bonkers?

The opening night of the hearings and Monday’s session presented clear and compelling evidence that Trump’s inner circle knew there was nothing fraudulent or fishy about the election and that this was repeatedly conveyed to Trump. Before Election Day, Trump had been told by his advisers that mail-in ballots, which likely favored Democrat Joe Biden, would be counted later in the day and could shift the results in swing states—that is, this would not be fraud. On election night, Bill Stepien, the longtime GOP operative who managed Trump’s campaign, and other campaign aides concluded that the final count would likely require several days of tabulation. They urged Trump to not declare victory or allege the election was being stolen from him. But an allegedly inebriated Rudy Giuliani, who was at the White House that evening, counseled Trump to do both. Whether or not Trump needed to be egged on by Giuliani—he had for months been claiming that he could only lose through fraud—he followed his lubricated lawyer’s advice. He asserted massive fraud had robbed him of victory, and millions of his cultists believed him. A dangerous disinformation campaign was launched.

In subsequent weeks, Trump aides and advisers repeatedly concluded that there was no evidence of electoral theft. The committee played several clips of onetime Attorney General Bill Barr calling Trump’s allegations “bullshit” and “nonsense.” Yet in this time period, the Trump camp divided into what Stepien called “Team Normal” (the Trumpers who adhered to reality) and the squad led by Giuliani and attorney Sidney Powell that spread convoluted conspiracy theories involving Venezuela, supposed German vote-harvesting farms, rigged voting machines, and other craziness. The normies included Matt Morgan, the campaign’s top lawyer, whose team of attorneys searched and found no significant fraud. Referring to the Giuliani and Powell, Eric Herschmann, a Trump White House lawyer, told the committee, “What they were proposing…was nuts.”

The committee outlined numerous instances in which Trump was informed a specific allegation of fraud was bunk. Barr noted his own frustration with Trump repeatedly citing one spurious charge after another. He described to the committee a meeting he had at the White House on November 23, 2020. Trump insisted that there had been major fraud and that as soon as this would be revealed, the results of the election would be reversed. Barr told him that the fraud allegations were “not panning out.” As Barr left the meeting, he asked White House Chief of Staff Mark Meadows and Jared Kushner how long Trump was going to “carry on with this stolen election stuff.” Meadows said that Trump was becoming “more realistic” and recognized the limits of how far he could push these claims. Kushner told Barr, “We’re working on it.”

Yet Trump kept at it. At a December 1 meeting—after Barr had earlier that day told the Associated Press there had been no serious fraud—an irate Trump raised numerous phony charges with Barr, who explained why each one was baseless. Barr also told Trump that Giuliani and Powell’s allegations about Dominion voting machines switching votes from Biden to Trump were reckless and “crazy stuff.” Yet the next day, Trump in public repeated the outlandish allegations about the Dominion machines. Derek Lyons, a Trump White House lawyer, also testified to the committee that he told Trump the voting fraud allegations were unsubstantiated.

This didn’t matter to Trump. He kept flinging the crap.

This raises an indelicate question. Was he delusional? Barr recalled a December 14 meeting with Trump in which the president delivered a long monologue claiming there was now definitive evidence that Dominion voting machines had been part of a colossal fraud scheme. He handed Barr a report that asserted this and told Barr that he would have a second term. Barr flipped through the report. It looked amateurish to him. He saw no supporting evidence. “I was demoralized,” he told the committee, adding, “if he really believes this stuff, he has become detached from reality.” Barr noted that Trump had no interest in “the actual facts.” The next day Barr resigned.

Detached from reality—that’s a frightening prospect regarding a person who controls a nuclear arsenal. But this is a matter that warrants attention, especially since Trump may seek the presidency again. Is it possible that Trump believed his own BS? That he couldn’t accept his loss and embraced a falsehood as true? Or was his promotion of this lie a cynical stance that he adopted only as a tactic to whip us his base, undermine the political system, and retain power? Meadows, according to Barr, believed Trump would come around to acceptance of reality. But Barr wondered if Trump had gone around the bend.  In a deposition with the committee, Alex Cannon, a Trump campaign lawyer, provided a clue, though it was not directly related to Trump. He recounted a conversation with Peter Navarro, a Trump trade adviser, who asked about the Dominion conspiracy theory. Cannon said that there was nothing to it. Navarro accused him of being an agent of the Deep State. It seems that the crazies in Trump’s orbit did believe their Dear Leader was the victim of an extensive and nefarious plot.

During the hearings, members of the committee have not directly addressed this topic, which could have legal implications. Trump’s state of mind might bear on the issue of whether he acted with corrupt intent when he conspired—in at least seven different ways, as Rep. Liz Cheney (R-Wyo) has repeatedly pointed out—to overturn the election. But the committee did suggest a crass possibility: Trump championed the Big Lie not out of belief but in search of big bucks. The committee noted that Trump raised $250 million with his fake stolen-election allegations in the weeks between Election Night and January 6. Trump donors were told this money was going to an “Official Election Defense Fund,” but no such fund existed. This was merely a marketing tactic, a Trump campaign aide told the committee. Instead, the money was spent on other things, such as Meadows’ Conservative Partnership Institute ($1 million) and the Trump Hotel Collection ($204,857), one of Trump’s hospitality businesses. The committee appeared to be suggesting the Big Lie was good for big grift. (All this money, by the way, was raked in not by the Giuliani-Powell nutters, but by the so-called Team Normal, the Trump regulars running his campaign and other Republican entities.)

Trump produced an unprecedented flood of lies and false statements during his presidency—over 30,000, according to the Washington Post. Is it possible he cannot tell fact from fiction? As a narcissistic egomaniac, does he believe he can manufacture reality? His psychological relationship with the truth has always been difficult to fathom. Trump cannot cite any confirmed evidence of fraud, yet he has unwaveringly insisted dark sinister forces stole a grand electoral landslide from him. Again and again, reality was presented to him, but he acted as if it did not exist. Is this because he cannot recognize reality or because he doesn’t want to recognize reality for assorted transactional purposes? So far, the committee has not provided an authoritative answer. But that may be above its pay grade. In any event, there is a fundamental truth that transcends resolution of this issue: Whether or not Trump believes in his Big Lie, he has successfully encouraged millions of Americans to do so, and that includes the thousands who assaulted the Capitol on January 6. In either case, Trump is a threat to the republic.