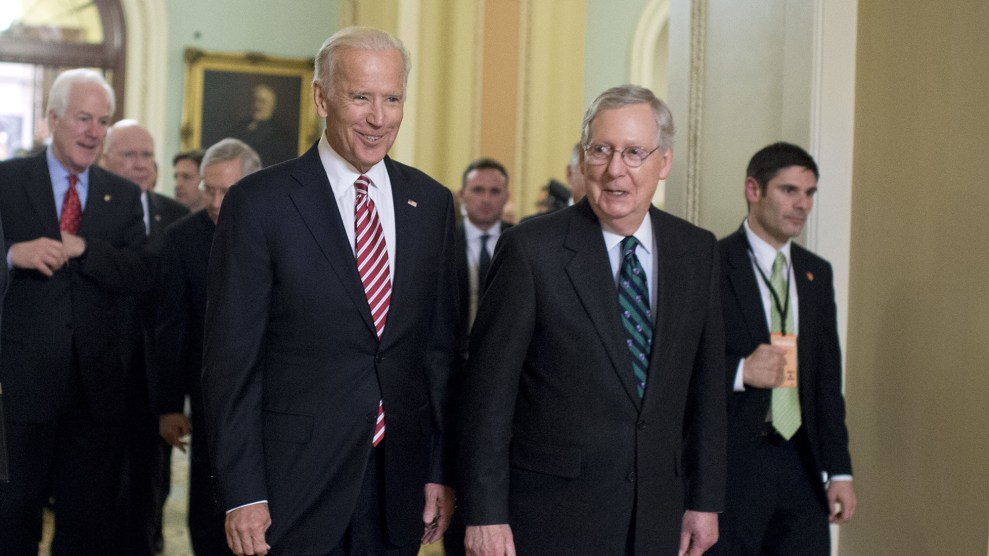 President Joe Biden on Friday abandoned his decision to nominate an anti-abortion attorney to the federal bench in Kentucky, which had angered his own party and caused weeks of pushback. But the details of the arrangement—and the reason why Biden changed his mind—are sure to cause even more fury on the left.

Biden’s nomination of Chad Meredith, a conservative lawyer in the mold of Justice Clarence Thomas, was a source of consternation and ire for fellow Democrats. Meredith, known as an aggressive opponent of abortion, had defended an anti-abortion law and the denial of a license to perform abortions to a Planned Parenthood clinic when he was serving as counsel to the previous governor of Kentucky, Republican Matt Bevin. As the Supreme Court was preparing to overturn Roe v. Wade and abortion rights in dozens of state were under the gravest attack in half a century, why was the Democratic president planning to give an anti-abortion lawyer a lifetime appointment to the federal bench?

Why was the Democratic president planning to give an anti-abortion lawyer a lifetime appointment to the federal bench?

The White House planned to announce Meredith’s nomination on June 24 over the strong objections of the Democratic governor of Kentucky, Andy Beshear, and Kentucky Democratic Rep. John Yarmuth. The announcement was delayed after the Supreme Court struck down Roe that same day. The Louisville Courier-Journal broke the news of the planned appointment five days later. Yet despite the new landscape for abortion and objections from Democrats and pro-choice groups, the White House decided to move forward with the nomination.

Rumors swirled about Biden’s rationale. One theory was that the nomination was part of a deal the president had struck with Senate majority leader Mitch McConnell, possibly to expedite the approval of other nominees. Meanwhile, Slate reported that McConnell had agreed to greenlight two US attorney nominations in Kentucky in exchange for Meredith’s lifetime appointment—an asymmetrical trade that made the White House look weak if not stupid.

But when Biden finally dropped the nomination on Friday, he didn’t do it because of a bad deal or the criticism from his own allies. Instead, it was because Kentucky’s other GOP senator, Rand Paul, objected to the nomination. In deference to Paul—but not members of his own party—the White House pulled the nomination.

With the nomination dropped, McConnell broke his silence, telling the New York Times that if Biden had appointed Meredith, he wasn’t going to get anything in return—the worst deal of all. “There was no deal,” McConnell said. “This was a personal friendship gesture” and a “personal favor.”

This would explain why the White House was silent about the nomination for so long, not even sharing its logic with Sen. Richard Durbin (D-Ill.), the chairman of the Senate Judiciary Committee. “I said, what’s in it for us?” Durbin told reporters this week, describing his query to the White House. “They haven’t given me a specific answer.” According to McConnell, the answer is that there was nothing in it for Democrats.

The latest twist is likely to inflame the left’s anger toward Biden. McConnell has used his power in the Senate to stymie Democratic judicial nominees while expediting Republican ones. But he is most known for orchestrating the right-wing takeover of the Supreme Court. First, McConnell refused to allow President Barack Obama to fill the seat vacated by the death of Justice Antonin Scalia in February 2016, then he rushed to fill Ruth Bader Ginsburg’s seat when she died just six weeks before the 2020 elections. This norm-breaking gave Trump three Supreme Court nominees and handed the far right a super-majority on the nine-seat court. You know the end of the story: The new conservative majority moved swiftly to end the constitutional right to abortion. The White House knew the court would likely overturn Roe this summer because a draft of the opinion leaked in early May.

Nevertheless, Biden decided to do McConnell a favor by putting a conservative attorney with an anti-abortion record on the federal bench. The White House did not deny McConnell’s version of events. “In considering potential District Court nominees, the White House learned that Senator Rand Paul will not return a blue slip on Chad Meredith,” spokesman Andrew Bates said in a statement when asked for comment, referring to the tradition by which senators assent to a judicial nomination in their state on a blue slip of paper. “Therefore, the White House will not nominate Mr. Meredith.”

Biden campaigned on his ability to work with Congress to get things done. Now it appears that Biden is capable of giving favors—but not extracting them.