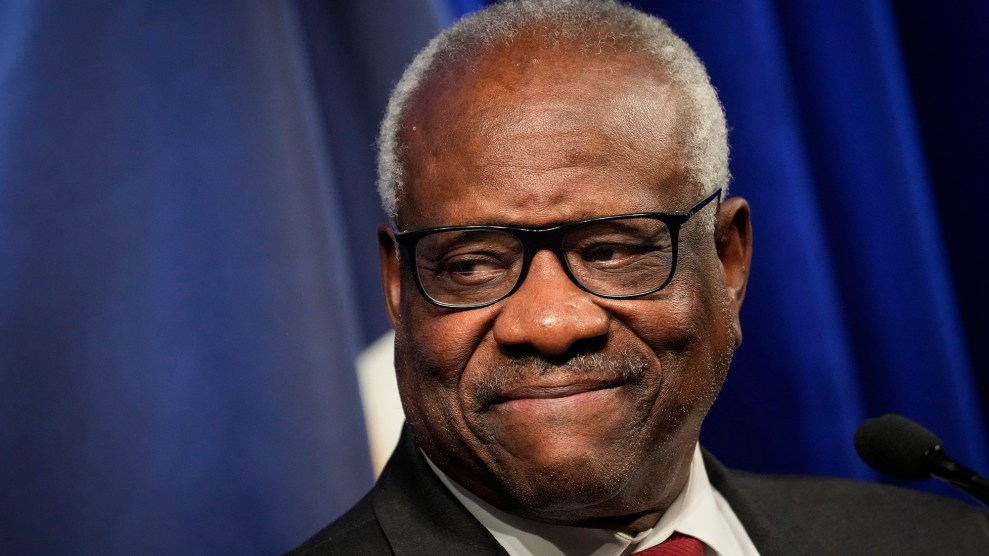 When the Supreme Court overturned the constitutional right to abortion last month, Justice Clarence Thomas made clear that he wasn’t planning to stop there. In a concurring opinion, Thomas called on the high court to revoke the rights to marriage equality, intimate sexual relationships, and contraception, as well. The landmark rulings establishing these rights, Thomas wrote, are “demonstrably erroneous.”

Thomas’ argument, which none of his colleagues joined, set off alarm bells among legal scholars and advocates for LGBTQ and reproductive rights. But then—in a separate opinion three days later that received far less attention—he laid out an alternate route to gut same-sex marriage and other personal freedoms: allowing government officials to simply refuse to recognize Americans’ constitutional rights if they claim those rights conflict with their own religious values.

“It would drive a truck size hole” in the right to marry the person you love.

As the court has moved swiftly to enact its conservative agenda on everything from abortion to religion to guns to climate change, Thomas’ own reputation has shifted with it. Once considered the court’s outlier, he is now viewed as its right-wing trailblazer. Now firmly in the majority, he’s turning his arch-conservative worldview into the nation’s reality. If there’s anything this past term has taught us, it’s to take seriously the possibility that Thomas and his conservative colleagues will not hesitate to make radical changes to American life.

Thomas has laid out two paths to achieve his social agenda. One, as the public quickly took note of, is to boldly overturn the cases that recognized the constitutional right to same-sex marriage and struck down bans on sodomy and contraception. This would allow state legislatures to prohibit these things outright. Thomas’ other strategy is more subtle, but it, too, would erode some of the rights we take for granted today, particularly marriage equality. Importantly, Thomas is not making an either/or proposition here; it’s clear that he wants to pursue both paths.

On June 27, the court’s conservative 6-3 majority ruled in favor of a public school football coach who had been fired for leading prayers at the 50-yard-line—one of multiple religion cases this term in which the conservatives whittled away at the separation of church and state. In this case, Kennedy v. Bremerton School District, the court privileged the coach’s free exercise and free speech rights under the First Amendment over the Establishment Clause’s protection against the government favoring or instituting a religion. Thomas joined this ruling and, in a concurring opinion, called for the court to expand religious free exercise rights for public employees.

“The Court refrains from deciding whether or how public employees’ rights under the Free Exercise Clause may or may not be different from those enjoyed by the general public,” Thomas wrote.

For good reason, public employees have more limited free exercise rights than everyone else in the course of doing their  jobs. The Free Exercise Clause is meant to protect religious practice from government interference. But if public employees held those same rights when performing their official duties, “government couldn’t be held to constitutional requirements, and the government couldn’t carry out programs constitutionally,” says Leah Litman, a constitutional law professor at the University of Michigan. It’s not hard to see how religious exemptions for government employees undermine constitutional protections. Imagine, for example, if public school teachers and administrators could have raised free exercise claims to avoid integrating public schools after Brown v. Board of Education.

A modern-day example is one that Thomas certainly has in mind today. When the Supreme Court established a constitutional right to same-sex marriage in 2014, public employees were required to help implement that right by issuing marriage licenses. But a Kentucky county clerk named Kim Davis sued, saying she had a religious objection to giving marriage licenses to same-sex couples. She lost her case. Marriage equality is the law of the land because public employees cannot use their free exercise rights to sabotage it.

In 2020, Davis’ case reached the Supreme Court. And though the justices declined to take it, Thomas took the opportunity to push the idea that the free exercise rights of public employees like Davis are being violated. Thomas, joined by Justice Samuel Alito, argued that in its earlier decisions guaranteeing marriage equality, the court’s “ungenerous interpretation of the Free Exercise Clause” left “those with religious objections in the lurch.” Further, he asserted, the court “created a problem that only it can fix” with “ruinous consequences for religious liberty.” In other words, there appear to be at least two—but likely more—votes on the court for allowing government officials to disregard Americans’ constitutional rights to which they supposedly have a religious objection.

Davis “was pressing the argument that she had a constitutional right to refuse to provide marriage licenses because her religious beliefs did not recognize marriage equality,” says Litman. “That is the potential next case or cases that Justice Thomas, I think, is carving out or signaling an interest in.”

Litman has previously warned that this was where Thomas was pulling the court, noting on the podcast she cohosts, Strict Scrutiny, that when Thomas wrote last month that the court should consider allowing public employees the same free exercise protections as everyone else, he was raising the same issue as he had two years earlier in the Davis case.

If the court takes up Thomas’ invitation to expand religious rights for public employees, same-sex couples could see their own rights significantly rolled back. “It would drive a truck size hole” in the right to marry the person you love, says Litman. But the possible impact wouldn’t stop there. If clerks could object to same-sex marriage licenses, they could presumably object to one for an interracial couple. Religion would continue to seep into public classrooms. Litman also raises the possibility of ramifications for health care if the court goes down this path. Doctors and administrators at public hospitals could refuse to provide contraception or gender-affirming care, she points out.

Ultimately, we can’t know the true extent of the fallout until we see the details of any future rulings. But if Thomas’ newfound influence on the court is any indication, we may soon find out.