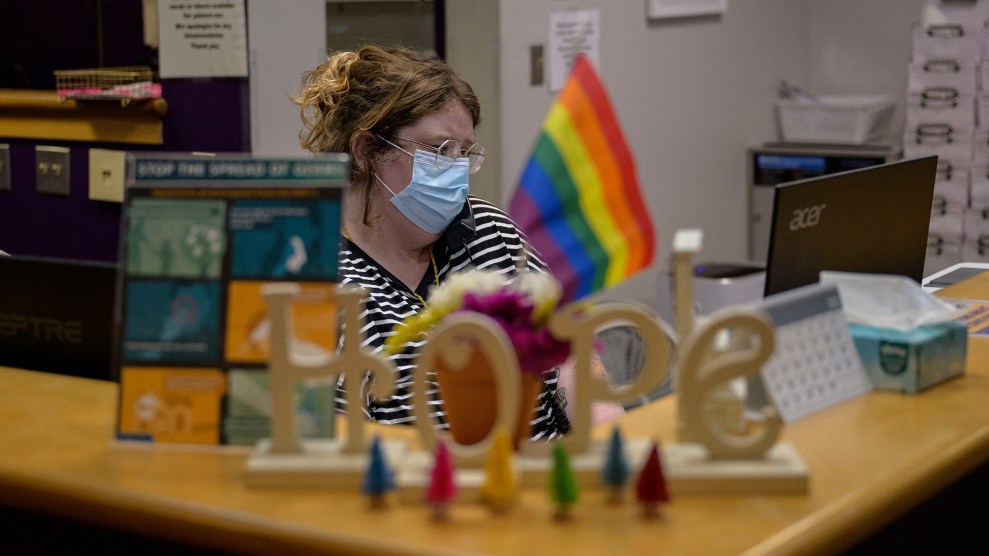 Hanz Dismer doesn’t have many moments to catch their breath at work these days. The education research coordinator at Hope Clinic for Women, an abortion clinic in Granite City, Illinois, Dismer is constantly bustling between supporting clinic staff, finalizing clinic research on patient demographics and statistics for the clinic, and providing counseling to patients.

“Right now, it’s very overwhelming,” Dismer says. The phone interview ended abruptly because they were called to counsel another patient.

Yet Hope Clinic stands to become much more crowded very soon. As of Friday, June 24, abortion is illegal in Missouri, a stone’s throw from Granite City, thanks to a trigger law that took effect with the release of the Supreme Court’s ruling in Dobbs v. Jackson Women’s Health Organization. That’s also the case in neighboring Kentucky and in nearby Arkansas. Tennessee currently has a six-week ban in effect. A week before the Supreme Court ruling the Iowa Supreme Court declared that Iowans have no state constitutional right to abortion, overruling their previous 2018 decision that said the opposite. Other Midwestern states, like Indiana and Ohio, are hostile to abortion rights and will likely move to ban abortion, putting further pressure on Illinois, whose 25 abortion clinics are bracing for impact.

“I’m devastated that it has come to this. But the fight is not over.”

Granite City is not exactly a progressive place. In 2020, 60 percent of voters in Madison County, which includes Granite City, went for Trump, while only 37 percent voted for Biden. But Illinois enshrined abortion rights in the state constitution in 2019. So Hope’s unique location will make it one of the nearest abortion clinics for millions of people across both the South and Midwest.

Dismer and their coworkers are quietly preparing to become ground zero for abortion access across the country. While the world watches Roe’s demise, Hope Clinic is trying to make the best out of a national tragedy, all while silently grieving themselves.

The staff at Hope had somewhat of a dry run back in 2019, when Missouri passed a ban on abortions at eight weeks. They began seeing a significant increase in patient numbers, from an average of 20 a day to upwards of 35 people in a day. They started working longer hours during the days they were open and added an extra open day during the week.

They shored up their staff to serve more patients, and it worked. But then came SB8, the draconian law that bans abortions at six weeks and deputizes private citizens to sue to enforce it. When the Supreme Court allowed SB8 to go into effect last September, most abortion patients in Texas were suddenly forced to leave the state. Many went to neighboring states like Oklahoma (which then instituted what was at that time the nation’s strictest abortion ban), and Hope Clinic worked closely with abortion funds and practical support organizations to support the impending influx of patients they knew was coming. Illinois is the only state in the region that provides abortions up to the point of viability, making it the only place to go for patients further along in pregnancy. And as clinics across the South and Midwest filled up with Texans seeking care, the backlog of abortion patients affected clinics beyond the immediate Texas border.

“Post-SB8, 80 percent of people in Texas needed care past six weeks, so those folks are no longer able to get that in their state,” explains Diana Parker-Kafka, Executive Director of Midwest Access Coalition (MAC), an organization that provides practical support for abortion seekers. Parker-Kafka and her team worked closely with Fund Texas Choice, a Texas-based abortion fund, to help facilitate travel and lodging for Texans forced to seek abortions in places like Oklahoma and Illinois.

Prior to SB8’s implementation in September 2021, Parker-Kafka estimates that her team served, on average, 40 clients a month. That number quickly shot up to 120 clients a month, many of whom they sent to Hope and the other abortion clinics across Illinois.

Hope Clinic’s staff knows that they won’t have the bandwidth to be able to shoulder that significant burden. “We’ve been massively hiring,” Dismer says. “I’ve hired two people in the past two weeks, just for my department,” which includes educators and counselors. The clinic is also shoring up staff numbers on the surgical team, at the front desk, and administratively.

Megan Jeyifo, executive director of the Chicago Abortion Fund, which provides financial assistance for abortion seekers in Illinois and beyond, is experiencing the same dramatic increase in requests for help. Just five years ago, CAF averaged 100 requests for assistance a month. Now, they average 100 callers a week.

“The projections are anywhere between 2,000 and 6,000 additional people coming into our state a month,” Jeyifo tells me.

“We have been preparing for a while because we’ve always expected this. It was just a matter of timing.”

That staggering increase in abortion seekers won’t just affect those traveling to Illinois; it will undoubtedly impact Illinoisans seeking abortion care. With thousands more patients every month, the clinics in Illinois will likely have longer wait times, a potentially life altering obstacle, since abortion is time-sensitive procedure. In 2020, there were 52,780 abortions performed in Illinois, according to the Guttmacher Institute. That number could more than double next year if Jeyifo’s projections are correct. As clinics across the state book up, a patient who is closer to the fetal viability cut-off point (24-28 weeks), or someone who doesn’t want to wait weeks to terminate a pregnancy, may not make it to the clinic at all.

The possibility of working overtime and still turning people away haunts Dismer. “More and more people are coming to us in worse and worse circumstances,” Dismer tells Mother Jones. “The further someone has to travel for care, the more barriers they have to care. That takes a big toll on [clinic staff’s] mental health.” And then, of course, there’s the toll it takes on the patients.

It isn’t just an increased number of people seeking care that concerns Hope Clinic’s team—more anti-abortion protesters are also worrying. For eight years, Sarah Phillips has been a clinic escort at Hope, walking patients from their cars to the clinic, mitigating the cruelty from the protesters who have for decades gathered on the sidewalk to shame the people seeking care.

“They’ve always been very bad and very vocal and very cruel, [but now] there’s more of them,” Phillips says. “You’ll see entire families showing up with numerous kids in tow, kids holding signs that are very graphic, people bringing their kids to guilt the patients going in, holding their babies up to be very visible.”

Eric Scheidler, Executive Director of the Pro-Life Action League, an anti-abortion organization founded by his father, the infamous anti-abortion leader Joseph Scheidler, has stated he plans to mobilize protests across Illinois. In a recent interview with NPR, Scheidler said that they are focusing on what he calls “abortion tourism,” and that they’ll be “redoubling our efforts to be out in the public square and offering help to women so to the extent that we possibly can, that they don’t feel all that pressure to get abortion.”

According to Phillips, protesters at Hope Clinic already look for out-of-state patients. “[Protesters] will target those patients in particular,” she says. “They will yell audibly to each other, ‘This one is from Arkansas,’ or Ohio, or wherever people are coming from.”

That’s yet another barrier that patients, particularly those traveling, will have to overcome. It could also raise the already-increasing numbers of aggression, disruption, and even violence at abortion clinics. And Hope Clinic is well aware of that. “We have been preparing for a while because we’ve always expected this,” says Mariceli Algeri, clinic support manager at Pro-Choice Missouri, which oversees the clinic escort program at Hope. “It was just a matter of timing.”

As a result, Algeri has been leading more escort volunteer trainings. She has been heartened by the increased interest—17 people showed up to her last training, compared with the 6-7 she was used to seeing. She’s also training new volunteer legal clinic observers, who, unlike clinic escorts, don’t interact with patients at all. Instead, their job is to observe what happens outside of the clinic and document any potential legal violations by the protesters. That way, clinic escorts and staff can keep their focus where it needs to be––on the patient.

Eventually, Dismer found a few moments to update me on how they are faring amid the chaos. They couldn’t muster yet another phone call—on the day of the Dobbs decision alone, the clinic received nearly six times their normal number of calls. So they wrote over email: “I’m feeling overwhelmed, terrified, angry, devastated, whatever negative emotion you can put on it,” they said. “The people are calling and are scared and confused…Missouri, where I live, was the first to make providing abortion care a felony.”

“I’m devastated that it has come to this,” they continued. “But the fight is not over, and we are working diligently to see everyone we can to make sure they have safe, legal, compassionate care.”