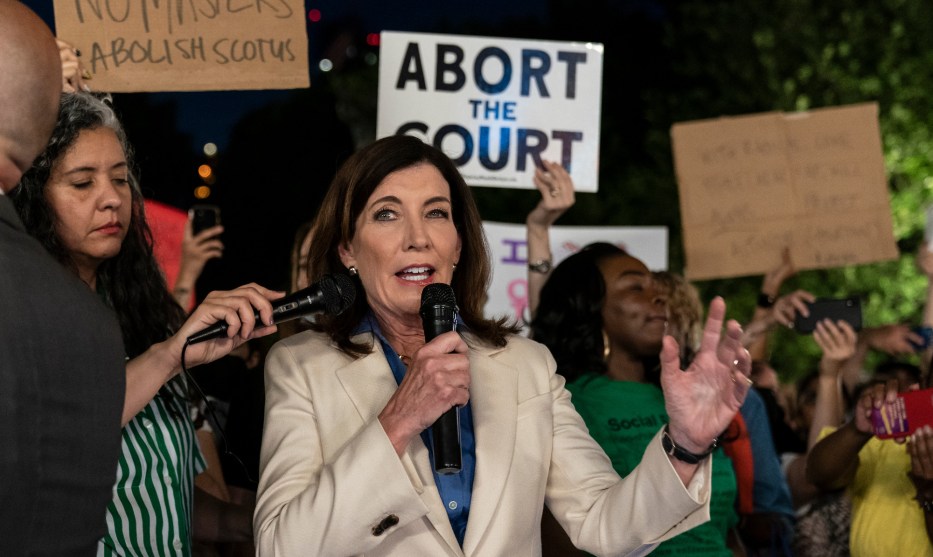 New York state didn’t wait too long to respond to the Supreme Court rulings on gun control and abortion. On Friday, after Democratic Gov. Kathy Hochul called a special session, the state Senate took major steps to shore up its concealed-carry law and enshrine reproductive rights in the state constitution.

The gun control measure responds to the court’s ruling that New York cannot restrict concealed-carry permits only to people who demonstrated a need, by imposing a 16-hour firearm training requirement and in-person interviews for all concealed-carry applicants instead. The effort to protect abortion rights will still require a longer timeline. As the New York Times notes:

“Amending the State Constitution is a yearslong process in New York, requiring passage by two separately elected Legislatures, and then approval by voters in a referendum. By passing it this year, Democratic leaders hope that they can win approval next year and get it to voters in 2024, when a high turnout is expected in a presidential election year.”

This is a notable step for a large Democratic state whose lawmakers have often talked a better game than they’ve played when it comes to enacting progressive policies. For years, the bullying former Democratic Gov. Andrew Cuomo blocked liberal policies while helping Republicans maintain a veto on any legislation in Albany. The looming imperative to protect abortion rights in the state against a conservative Supreme Court was a significant talking point from his 2018 primary challenger, the actress Cynthia Nixon. Cuomo only took steps to change that after he won—and progressives went around him to flip the state Senate.

Last month, Hochul signed laws protecting the rights of out-of-state patients seeking reproductive care and barring state law enforcement officers from cooperating with other states’ investigations into patients who travel to New York. She also allocated $10 million in funding to help bolster security for abortion providers, and $25 million for an “Abortion Services Provider Fund,” which would support existing abortion providers whose services will face increased demand in a post-Roe landscape.

But to be a safe haven from reactionary governance, New York has a lot farther to go. How far? So-called crisis pregnancy centers, which peddle false information and exist to prevent women from getting abortions, currently outnumber abortion providers in New York City.

In a recent piece in The Atlantic, Jerusalem Demsas noted that “What blue-state politicians are not doing is ensuring that people in other states can find refuge in Democratic states.” Decades of inhospitable housing prices have made it ever more difficult to actually relocate to places like New York, and ever more difficult to stay there. As Demsas wrote:

The inhospitality of rich, liberal states to the poor and working classes is a problem at the international level as well. During the recent Afghan-refugee crisis, resettlements to coastal areas foundered on the lack of available affordable housing. When the State Department released a list of cities with potential homes for refugees, it left off America’s largest progressive cities: New York, San Francisco, Los Angeles, Seattle, and Washington, D.C. Refugees are actually not welcome here, it seems.

Or New York is laying out a welcome mat. But it doesn’t do much good if you can’t get in the door.