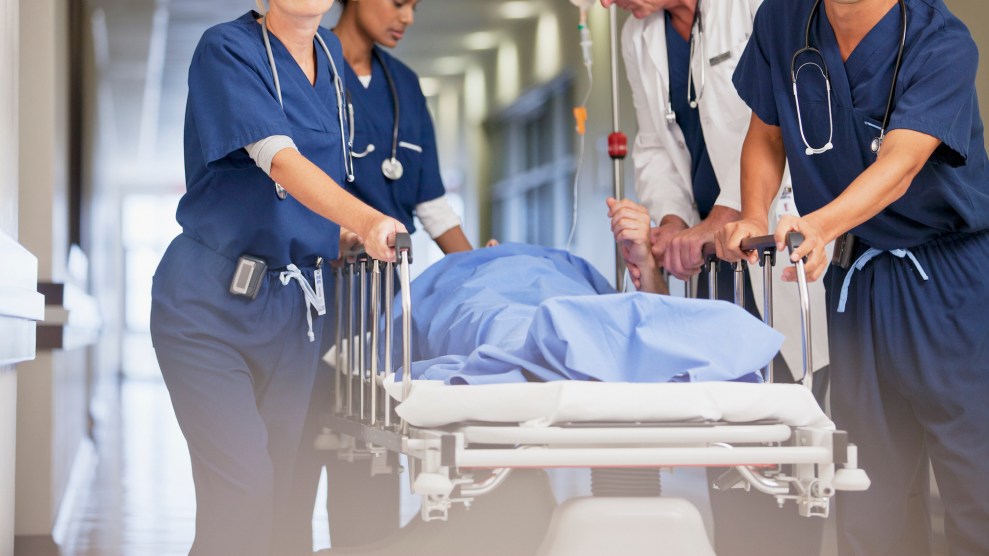 It’s a foregone conclusion that the Democrats’ bill to restore abortion rights will fail in the Senate in the coming days, just as it failed in May and in February before that. The Women’s Health Protection Act, which guarantees the right to seek and provide an abortion before fetal viability, wouldn’t just undo the blanket abortion bans now taking effect across the country. Were it to become law, the Women’s Health Protection Act would, in fact, erase years of work by the “pro-life” movement’s symbiotic Republican state legislators.

That immense power comes from the constitutional principle of “preemption”: When federal and state laws conflict, federal laws win. Preemption is why no state can allow employers to pay less than $7.25 per hour, the federal minimum wage. And it’s the key to any Biden administration plan to fight state abortion restrictions.

On Monday, the Department of Health and Human Services invoked the principle of preemption when it issued guidance putting hospitals on notice that they’d be violating a federal law, called the Emergency Medical Treatment and Active Labor Act (EMTALA), if they declined to provide abortions to patients who needed them to resolve a medical emergency, like an ectopic pregnancy or a miscarriage with severe complications.

That move was in response to states enacting criminal abortion bans that allow exceptions to save a pregnant person’s life—but fail to clarify just how close to death a pregnant patient must be before a doctor is allowed to give them a medically necessary abortion. The ambiguity in Wisconsin’s state abortion ban, for instance, has left doctors like Abigail Cutler, an OBGYN in Wisconsin, in an impossible bind. Wisconsin’s law, written in 1849, allows abortions to “save the life of the mother.” “Where’s that line?” Cutler asks. “How close does a patient need to be? On the brink of death for me to step in and intervene? What if I wait too long and she dies in front of me? Or what if in the eyes of some prosecutor who’s not a doctor, not at the bedside, not staring at the patient bleeding or infected in front of them—to them, what if I intervene too soon, and I’m charged and risk going to prison?”

EMTALA, passed in 1986, offers doctors a clearer-cut answer. The law was written to address the problem of “patient-dumping”: private hospitals turning away poor and uninsured people or sending them on dangerous transfers to public hospitals for treatment. With EMTALA, Congress requires hospitals to screen incoming patients for “emergency medical conditions”—including labor—and care for them until their condition is stable. If they don’t, they risk a government fine, a patient lawsuit, or being cut out of the Medicare program. That makes EMTALA a potentially heavy hammer—and a powerful tool to shape hospitals’ patient care policies.

Crucially, EMTALA establishes the definition of an “emergency medical condition” as one that manifests in “acute symptoms of sufficient severity (including severe pain) such that the absence of immediate medical attention could reasonably be expected to result in placing the health of the individual… or her unborn child in serious jeopardy, serious impairment to bodily functions, or serious dysfunction of bodily organs.”

Monday’s HHS guidance is a reminder to hospitals (and state legislators) that EMTALA preempts state law. “If a physician believes that a pregnant patient presenting at an emergency department is experiencing an emergency medical condition as defined by EMTALA, and that abortion is the stabilizing treatment necessary to resolve that condition, the physician must provide that treatment,” the federal guidance stated. “When a state law prohibits abortion and does not include an exception for the life and health of the pregnant person—or draws the exception more narrowly than EMTALA’s emergency medical condition definition—that state law is preempted.” In other words, if a pregnant person came into the emergency room with symptoms that met EMTALA’s definition of an “emergency medical condition,” but state law wouldn’t allow an abortion unless the patient was closer to the verge of death, the hospital should do the abortion sooner, not later.

In a letter to health care providers accompanying the guidance, HHS Secretary Xavier Becerra added that EMTALA could be used as a defense if they were prosecuted or disciplined for performing an abortion on a patient who needed it. EMTALA’s definition of “emergency medical condition” could include ectopic pregnancy, complications of pregnancy loss, or severe preeclampsia, he explained. “Any state laws or mandates that employ a more restrictive definition of an emergency medical condition are preempted by the EMTALA statute,” he wrote.

The guidance was welcome news to Greer Donley, associate professor at the University of Pittsburgh law school, and Kimberly Chernoby, an emergency room doctor and reproductive rights lawyer who teaches at the GW School of Medicine and Health Services. The pair wrote in the Atlantic last month that the Biden administration should use EMTALA in this way to “save lives and reduce unnecessary carnage” after the fall of Roe. There’s already some data to support their position. A recent study in the American Journal of Obstetrics and Gynecology looked at Texas patients less than 22 weeks pregnant who came to emergency rooms with severe preeclampsia, vaginal bleeding, or whose water had broken—but whose fetus still had detectable cardiac activity. Previously, those patients would be given the choice to immediately end their unviable pregnancy. But last fall, after Texas passed a law imposing civil penalties on doctors who perform abortions once fetal cardiac activity is detected, the two hospitals in the study changed their approach: Rather than giving patients the option to induce labor, they waited for the women’s condition to deteriorate. Fifty-seven percent developed severe medical complications, compared to 33 percent of patients with similar symptoms who were able to end their pregnancies in other states.

Chernoby has seen her share of patients with complications like these. As many as 26 percent of all pregnancies end in miscarriage (a lesser proportion require emergency medical treatment). Between 1 and 2 percent of pregnancies are ectopic. In those cases, “with the restrictive state laws, some physicians wouldn’t be able to intervene until either the cardiac activity had ceased or until the pregnancy had ruptured and the pregnant person was hemorrhaging,” Chernoby says. In the Texas study, the patients had to wait an average of nine days before they developed infection, went into labor, or the fetus died—at which point doctors could act. Nine of the patients hemorrhaged. Just one fetus survived.

So emphasizing that EMTALA overrides state laws and allows abortion in these cases is “a really important step,” according to Donley. The next step for the federal government is enforcement, so that red-state hospitals now revising their policies to accommodate new abortion bans take seriously the legal risk of not providing medically necessary abortions. “Hospitals have to understand that there’s risks in the other direction,” Donley says. “You need to have a Biden administration that is very aggressive on this particular action and willing to go after hospitals once complaints are filed.”

Perhaps predictably, Texas has already thrown a wrench in this process. On Thursday, Texas Attorney General Ken Paxton sued Becerra, alleging that the new EMTALA guidance creates an “abortion mandate” and would “transform every emergency room in the country into a walk-in abortion clinic.” This is obviously hyperbole. “The guidance just reminds hospitals that under EMTALA, they have an obligation to provide life-stabilizing treatment, and in some cases, that may be abortion,” Chernoby argues.

Currently, Texas’ abortion ban—passed in 1925—allows abortions if they are performed under “medical advice for the purpose of saving the life of the mother.” A new state law, set to take effect in the coming weeks, is more specific, allowing abortions in the case of medical emergencies, defined as a “life-threatening physical condition aggravated by, caused by, or arising from a pregnancy that places the female at risk of death or poses a serious risk of substantial impairment of a major bodily function unless the abortion is performed or induced.” Paxton’s lawsuit appears to believe EMTALA goes further than the state law definition, “allowing abortions when the life of the mother is not in danger,” as his complaint alleges. For the federal government to require hospitals treat those patients, he claims, “directly infringes on Texas’s sovereign and quasi-sovereign authority.”

Now, while a federal judge in Lubbock, Texas, weighs whether to grant Paxton an injunction to block the so-called “abortion mandate”—it’s unclear whether this would involve blocking EMTALA entirely—doctors are once again in a precarious position. “With this new guidance, the hope was that physicians would feel like they have some legal protection in providing the care that is indicated, and for providing life-saving care for patients who present with these emergency medical conditions,” Chernoby says. “So by introducing this litigation, you go back to square one, where we’ve been seeing physicians who are transferring patients across state lines to get life-saving care because they don’t feel like they are able to provide the care that’s indicated.”

Correction, July 18: A previous version of this story misreported whether a study in the American Journal of Obstetrics and Gynecology had completed the peer review process. The study was published July 4.