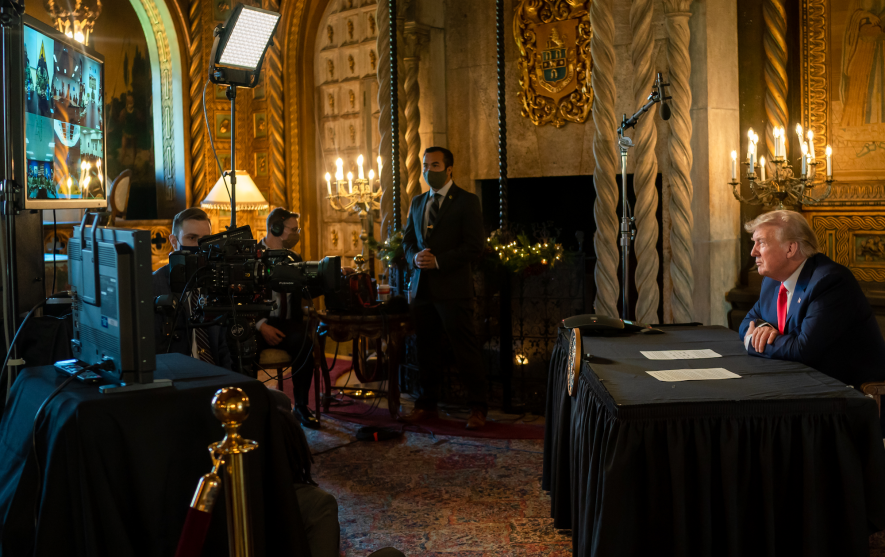 Trump hanging out in Palm Beach in December 2020.

The dust had hardly settled from the FBI’s raid of Mar-a-Lago on Monday when a thunderous chorus of Republican lawmakers, rabid Trump zealots, two prominent Andrews, and pundits of all stripes weighed in on the extraordinary search at former president Donald Trump’s Palm Beach home.

So far, the appraisals have been varied. But they tend to share a common identity of extremely amped up, conspiratorial, and ready for battle. Let’s take a tour of some of their strangest responses.

“This is some third-world bullshit.”

“This is some third world bullshit” pic.twitter.com/1orUanPiAD

When street crimes go unsolved but opposition leaders are hounded by federal police, you’re living in a third world country

If the FBI can raid a U.S. President, imagine what they can do to you.

Biden is weaponizing the DOJ against his political opponents. If they can do this to the former President of the United States, imagine what they can do to you. https://t.co/2b9kX1F938

Imagine if the full force of the American justice system came down on you.

I don’t have to imagine – it happened to me. It happened to President Trump. Conservatives now know it can happen to any of us.

Sever all ties with DOJ immediately

Three-letter federal agencies are coming for you.

If the FBI is brazen enough to set the precedent of raiding a former president’s home, good luck to you middle-class gig economy folks when the 87,000 new IRS agents come calling.

It is corrupt & an abuse of power.

What Nixon tried to do, Biden has now implemented: The Biden Admin has fully weaponized DOJ & FBI to target their political enemies.

And with 87K new IRS agents, they’re coming for YOU too.

Democrats just voted to give the IRS 87,000 more agents.

If the DOJ can target President Trump, imagine what they are going to do to anyone that dares support him.

The same Democrats cheering on the FBI raiding President Trump’s house are trying to give the IRS 87,000 new agents and an additional $80 billion.

And we’re supposed to believe they won’t also weaponize the IRS?

One more example of our two-tiered system of justice.

Who do you think they’ll weaponize the 87,000 IRS agents against?

The answer is obvious. Their political enemies. https://t.co/G9vp1bY2ON

DOJ must immediately explain the reason for its raid & it must be more than a search for inconsequential archives or it will be viewed as a political tactic and undermine any future credible investigation & legitimacy of January 6 investigations.

I’m no Trump fan. I want him as far away from the White House as possible. But a fundamental part of his appeal has been that it’s him against a corrupt government establishment. This raid strengthens that case for millions of Americans who will see this as unjust persecution.

His supporters wanted to hang me but I’m just as mealymouthed as ever.

When the pro-Trump influencers are talking like this — and not just anonymous posters on TheDonald — we're in very different territory. pic.twitter.com/0AlWRb6hrA

A big spike in tweets referencing "civil war" right after the news of the FBI search of Mar-a-Lago broke last night.