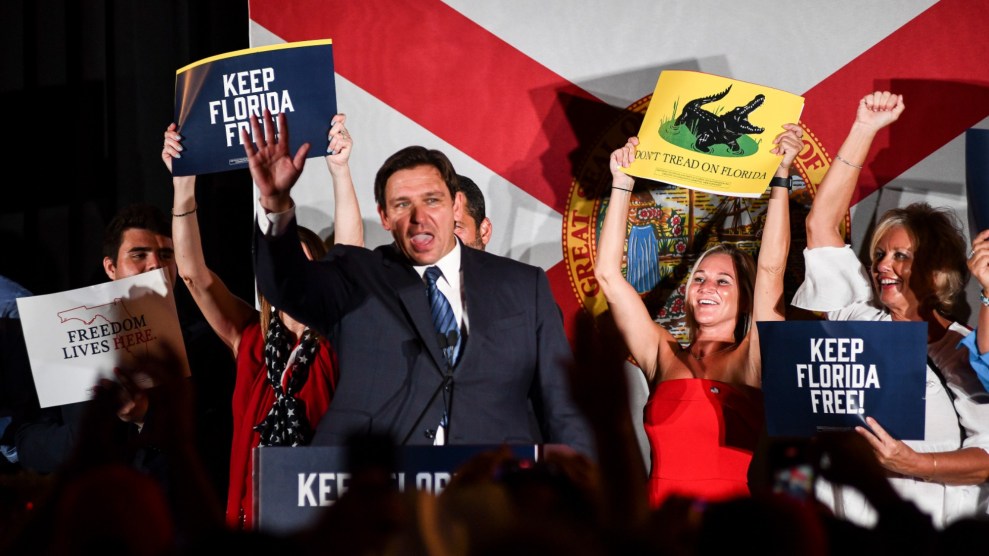 In the days leading up to the Tuesday primaries in Florida, Gov. Ron DeSantis went on an “Education Tour” across the state to endorse candidates for school board races. His efforts paid off. Of a total of 30 candidates the governor handpicked and donated to for aligning with his “parent-centered,” so-called anti-woke agenda, at least 21 had won their elections by Tuesday night. DeSantis’ unusual involvement in the local races reinforced how culture wars on education have become central to the GOP strategy and that the days of nonpartisan school board elections are long gone.

“If I could have a conservative majority on every school board in the country, we would be in such good shape,” DeSantis, who is running for re-election and has been clearly positioning himself for a potential 2024 presidential bid, said at a rally over the weekend. In Sarasota County, where the school district enrolls about 45,000 students, the victories of three candidates endorsed by DeSantis—Bridget Ziegler, a Moms for Liberty national leader, Tim Enos, and Robyn Marinelli—flipped the school board to a 4-1 conservative majority. “The Community has spoken and it is crystal clear—they are demanding a reset of the school board,” Ziegler, whose husband is the vice chair of the Republican Party of Florida, Tweeted after winning re-election for a four-year term. “And that’s what they are going to get.”

Ziegler’s blueprint for education mentions leaving “CRT out of the classroom,” keeping “boys out of girls’ bathrooms and locker rooms,” and “sexual education focused on biology, not pleasure or gender theory.” Former teacher and school counselor Robyn Marinelli defeated her opponent, who had been endorsed by the local Democratic Party, despite being outraised by more than $170,000. Conservative candidates supported by the governor prevailed in at least four out of seven races against candidates backed by Democrats, according to Politico.

The election of conservatives for school boards across Florida also represented a victory for national groups like the 1776 Project PAC and Moms for Liberty that cropped up in the last couple of years and have endorsed several successful candidates. My colleague Kiera Butler wrote about Moms for Liberty, which has more than 100,000 members across 38 states:

Media coverage of Moms for Liberty often tends to portray them as kooks who can’t possibly be taken seriously. But it’s a mistake to underestimate their power or the possibility they could be a deciding factor in the midterm elections. While billing itself as a grassroots organization—a loose coalition of like-minded moms who are concerned about the liberal bent of education—its supporters include heavy hitters in the conservative movement. Influential Republican strategists populate its leadership team, and major right-wing think tanks support it both financially and with expertise.

All that conservative political prowess fuels one explicit goal: to take over school boards.

School boards all over Florida will now have Parents’ rights candidates calling the shots! It’s a great day! 🇺🇸

Newcomer April Carney, who appeared on Steve Bannon’s War Room podcast to announce she was running for a school board seat in Duval County, won her election. Carney has disputed accusations that she attended the January 6 riot. “We want you to go to these school boards, whether it’s for CRT, Critical Race Theory, vaccines, mask mandates, and we want you to do what April Carney is doing,” Bannon said. “Eventually say, you know what, I’m going to run. We got to remove these people… that’s democracy.”

Two candidates endorsed by DeSantis and backed by the 1776 Project PAC and Moms for Liberty won their races in Miami-Dade County, helping bring a conservative majority to the board. One of them was Monica Colucci, who ran on a “Education, Not Indoctrination” and school choice platform and criticized the school board for not standing up to “progressive activists and special interests seek to promote socialist curriculums and ideologies in our schools.” She defeated an incumbent of 24 years.

Progressive groups also scored some victories. DeSantis’ endorsed Fred Lowry, a council member and pastor who faced calls to resign for spreading conspiracy theories about Covid-19, the 2020 elections, and QAnon, lost his race for a Volusia County school board seat. Equality Florida, a civil rights organization focused on the LGBTQ community, claimed Equality Florida Action PAC-endorsed candidates beat Moms for Liberty candidates 2-1 in head-to-head disputes. “The governor’s heavy investment in school board races across the state was a continued escalation of his assaults on students, educators, and families,” the group said in a statement. “Fueled by government censorship legislation like the Stop WOKE Act and Don’t Say LGBTQ, DeSantis’ agenda of banning books, censoring speech, propagandizing history, and trafficking in bigotry to score political points will now be promulgated by his hand-picked extremists on school boards across Florida.”