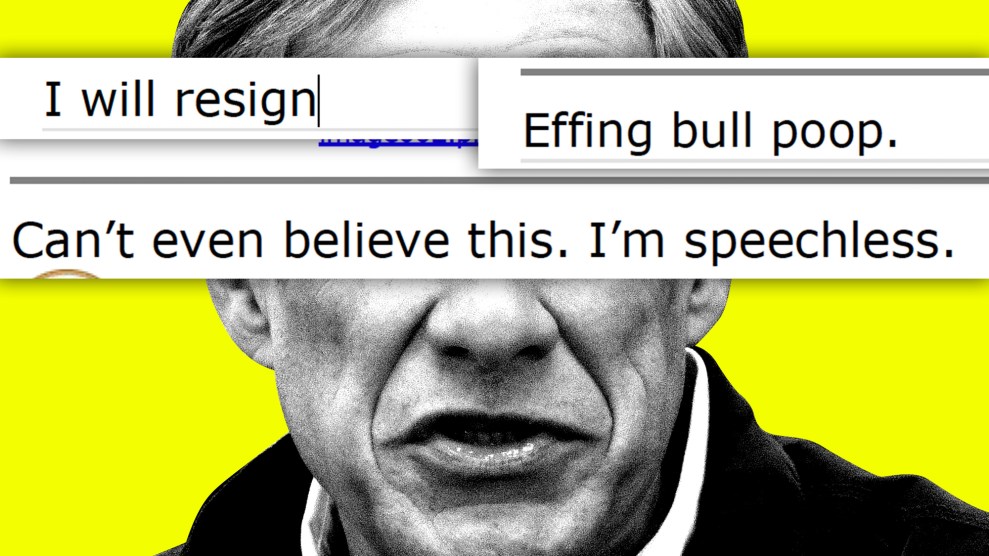 Back in February when Texas Gov. Greg Abbott ordered child welfare officials to investigate the parents of transgender kids as possible abusers—simply because the parents gave their kids the health care needed to transition—a lot of people were scared and angry. The governor’s order made national headlines as LGBTQ groups sued and families with queer kids considered whether to flee the state. Major medical associations warned that the directive was problematic, because many trans children relied on transition-related treatments, like puberty blockers and hormone therapy, to survive and maintain their mental health.

It turns out, some of the state’s child welfare officials at the Department of Family and Protective Services were unhappy about the governor’s order, too. After Abbott issued the directive, the agency told its employees to keep quiet about it—not to post anything on social media, or even to email or text with each other about it. But according to a trove of internal agency emails that I obtained last week in a public records request, some of the agency’s officials were shocked and outraged by the mandate to investigate the parents of trans kids. It’s “effing bull poop,” one investigator wrote bluntly in an email to another employee days after the governor’s directive, as the agency began to look into some of these parents.

“Can we be forced to do this? This is an infringement on civil liberties.”

Another staffer, a program director who managed investigators, threatened to resign in protest. “Can we be forced to do this? This is an infringement on civil liberties,” the program director wrote to a regional attorney at the agency, adding that he refused to “punish those that are part of the community simply because they are trans.” The investigator noted that the agency had some transgender employees itself. “[W]hat kind of message are we sending to them?” he added.

“This is Texas now?” a third employee wrote in an internal email. “Because this is BS. Sorry not sorry. Really???”

A program specialist at the agency added, “I wish this [governor’s order] had not been sent out.” And in early March when the ACLU and Lambda Legal filed a lawsuit against the policy, another employee wrote in an internal message, “Can’t even believe this. I’m speechless.”

I obtained hundreds of pages of internal emails from Texas’ Department of Family and Protective Services, sent in late February and early March. Most of the messages were from supervisors, circulating the governor’s order to staffers (along with a related opinion from state Attorney General Ken Paxton supporting it) and offering instructions for how to implement it. “We need to ensure our high performing workers are assigned these cases because there will be a lot of eyes on them,” Keith Gailes, a regional director for the agency, wrote in an email. “Please keep in mind,” wrote program director Amanda Prewitt, “if you get any reports of this nature (gender reassignment, transitioning, etc) I need you to immediately notify me of such so I can pass it up the chain…This is our current hot topic!”

Several emails emphasized that staffers should refrain from sharing their thoughts in writing or communicating about the issue via email or text message. “Everyone you need to stay off of social media with any opinions based on the following,” Maria Terry, a supervisor at the agency, wrote in an email. “We will be investigating these cases. This will get messy.”

“I know people are not going to be happy but they need to be reminded that they work for the State,” wrote Martin Lopez, another supervisor. “Staff need to be clear that as state employees their public/social media opinions must be neutral to non-existent.” Supervisor Kyndall Trahan added in another message, “Please know that this email is not the platform for opinions or discussion on this topic. If we need to meet privately, my door is always open.”

Perhaps because of these warnings, only a small number of the employee emails I obtained conveyed personal feelings about the governor’s order. Most of these notes were negative, but one could be construed as supportive: “This looks to be a good message,” employee Sherrie Hardie wrote in response to her boss’s email referring to the governor’s order. A couple of other opinions appeared to be neutral: “It will be interesting to see how this will play out,” Kelly Templeton, a child safety specialist, wrote in an email. It’s likely that some messages were not shared with Mother Jones; I only requested communications to and from the agency’s executive team and their deputies, officials like agency commissioner Jaime Masters and chief of staff Julie Frank, which means that emails between lower-level staffers were potentially left out.

In the weeks following Abbott’s order, the agency opened investigations into at least nine families with transgender kids. (One of those parents told me recently about the experience.) The ACLU and LGBTQ rights groups filed lawsuits seeking to end the probes. In June, a Texas judge sided with them and temporarily blocked the state from pursuing some of the investigations—specifically ones that had been launched against families that sued, plus investigations against any members of the LGBTQ group PFLAG, which has more than 600 members statewide. “I do find that there is sufficient reason to believe that the plaintiffs will suffer immediate and irreparable injury if the commissioner and the [Department of Family and Protective Services] are allowed to continue to implement and enforce this new Department rule that equates gender affirming care with child abuse,” Judge Jan Soifer said in a hearing, according to NPR.

One of the parents that had been under investigation actually had a close link to the Department of Family and Protective Services—she worked for the agency, as an employee reviewing abuse and neglect cases. The agency knew that the employee, not named in court documents, had a 16-year-old child who happened to be a transgender girl. “We are terrified for [our child’s] health and well-being, and for our family,” wrote the employee in court documents. “I feel betrayed by my state and the agency for whom I work.”