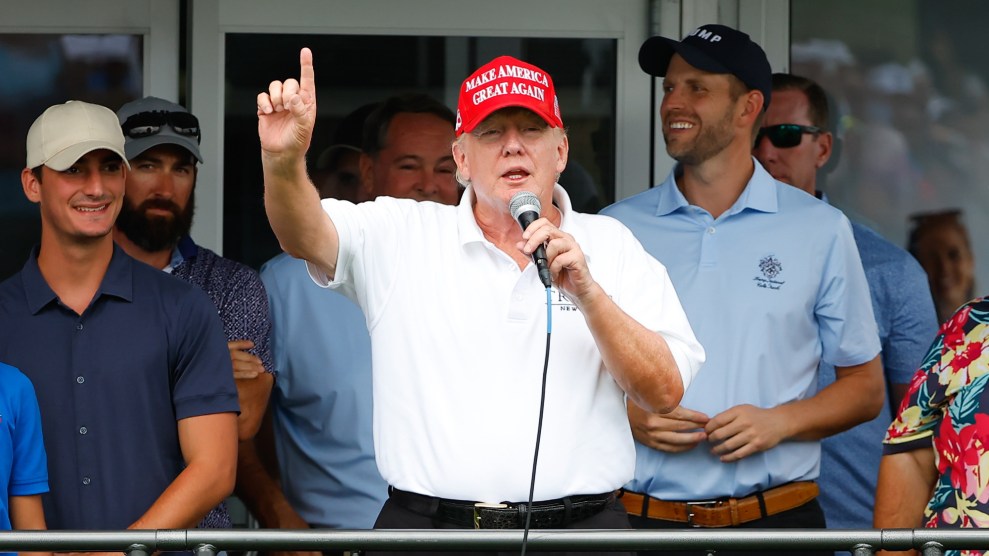 On Monday, former President Donald Trump announced his choice for Missouri’s Republican Senate primary. “I trust the Great People of Missouri, on this one, to make up their own minds, much as they did when they gave me landslide victories in the 2016 and 2020 elections,” he wrote. “[A]nd I am therefore proud to announce that ERIC has my Complete and Total Announcement.”

This looks like a typo, but it’s a bit more complicated than that. There are two Erics among the candidates vying to replace the retiring Sen. Roy Blunt—Eric Schmitt, the state attorney general; and Eric Greitens, the state’s former governor. As Politico reported, Trump decided to endorse both of them (or neither of them, defending on how you view it) after a long day of lobbying from supporters of both. Spare a thought for Rep. Billy Long, whose years groveling for Trump’s scraps nonetheless left him holding an extremely sad-looking bag:

I coined the phrase 'Trump Train.' I've been with him through thick and thin but I was taken aback when he came out with a full throated endorsement of me in #MOSen race! He said to pick BETWEEN the two ERIC's – that's ME! E.S. line 2 E.G. line 4 I'm BETWEEN the two on line 3! 🇺🇸

Endorsing two Erics is a joke, but it’s a particularly sick one. The de-facto leader of the Republican party—who has himself been accused repeatedly of sexual assault (he has denied the allegations, but has also boasted on tape about such behavior)—issued a quasi-endorsement of Greitens, who resigned from office four years ago amid allegations of blackmail and sexual assault. My colleague Madison Pauly wrote a detailed account of the allegations against Greitens last year, but here’s the most relevant detail:

Greitens’ former hairdresser, who is identified as K.S. in court documents, testified to a legislative committee that in 2015, months before he started his campaign for governor, Greitens put his hand “all the way up” between her legs during an appointment without her consent. Two weeks later, she went to Greitens’ house at his urging. During an encounter in his basement, she told the committee, Greitens took a partially nude photo of her and threatened to release it if she went public about their relationship. When she broke down crying, he allegedly coerced her into oral sex. “It felt like consent, but, no, I didn’t want to do it,” K.S. recounted to the committee. “Coerced, maybe. I felt as though that would allow me to leave. That’s what he wanted.”

In court documents filed this year, Greitens’ ex-wife alleged a history of spousal and child abuse, and she told the Missouri Independent that she eventually left the state with her kids because she feared for their lives. (Greitens has denied every allegation of abuse, and he insists that he simply had a consensual affair with his hairdresser and never engaged in violence or blackmail.)

It’s just very dark and bad, though not especially surprising, that an ex-president would back someone like that. Trump’s soon-to-be daughter-in-law, Kimberly Guilfoyle, reportedly pushed him to back Greitens by noting that the state party’s higher-ups were against him—which, yeah, no shit.

But the allegations against Greitens shouldn’t cause you to lose sight of the other Eric in the race—Schmitt, who actually leads the polls heading into the election and would be a major favorite against a Democratic nominee. While Greitens has sought to use Trump’s false claims of a stolen election to boost his own candidacy—he even traveled to Arizona last year to support efforts to “decertify” the election results in that state, and demanded “answers…not just in Arizona, but also in Michigan and Wisconsin and Georgia”—Schmitt actually used his official state office to back an effort to overturn the election.

When Texas Attorney General Ken Paxton, who has been under indictment for securities fraud for seven years, filed a lawsuit in December 2020 attempting to coax the Supreme Court to throw out the electoral slates from three Biden-won states—a lawsuit so sloppily argued that it has since triggered a lawsuit against Paxton by the State Bar of Texas—Schmitt filed an amicus brief in support of his effort. His office then led the effort to get more Republican AGs to sign on; ultimately 16 of them did. Paxton’s false claim that those states carried by Biden had conducted illegitimate elections—and that therefore those results should be overturned—was the intellectual basis, such as it was, for January 6.

Schmitt is Paxton without the indictment—and now he’s got a very good chance of joining Josh Hawley in Washington.