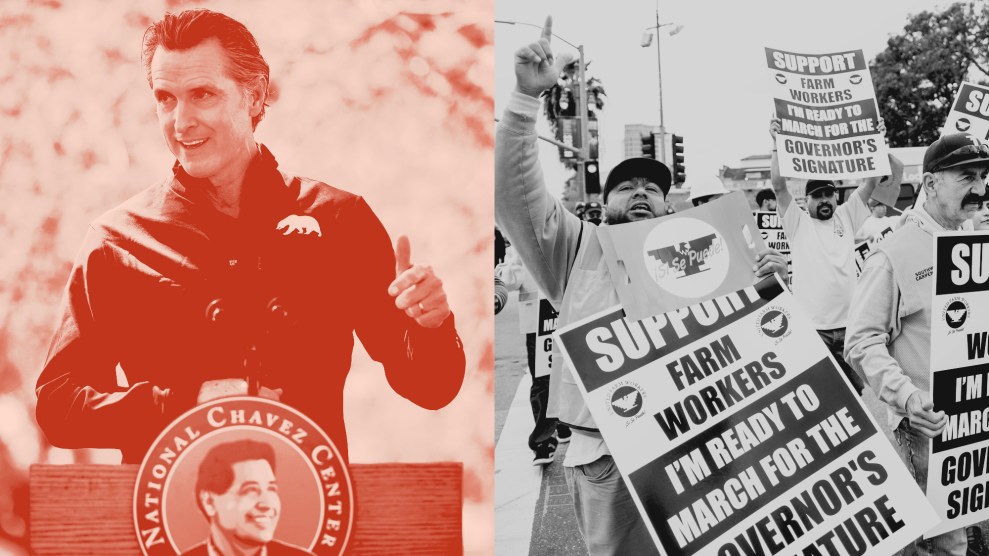 Thanks to an epic organizing campaign by the United Farm Workers (UFW), which began in the 1960s and faced violent opposition, California became a farm labor paradise, relatively speaking. Its farmworkers have the right to form unions without overt meddling from bosses, and can expect time-and-a-half overtime pay—rights denied to peers in most states, thanks to racist exemptions to New Deal-era labor reforms. California is also one of the few states that has enacted rules to protect outdoor workers from heat stress—a potential lifesaver in an era of increasingly frequent and brutal heatwaves.

Still, farm labor unionism is on the ropes even in the Golden State—the source of more than a third of US-grown vegetables and three-quarters of America’s fruits and nuts. UFW membership peaked at about 70,000 a half-century ago. Now, in a state with more than 400,000 non-management agriculture workers during the high season, this storied labor union counts fewer than 7,000 active members—which is “statistically zero,” according to the policy magazine CalMatters. So, despite the triumphs of the ’60s and ’70s, California’s farm workforce, which consists largely of undocumented immigrants, is essentially feeding the nation without union representation.

UFW launched a successful campaign earlier this year—including a dramatic 335-mile march to Sacramento—to urge the State Assembly to pass the Agricultural Labor Relations Voting Choice Act (AB 2183), which the union says will make it easier for farmworkers to organize. Under a law enacted in 1975, farm union elections currently take place in person, on sites owned by the growers. This subjects workers to intimidation, the union argues. More than 90 percent of the farmworkers are immigrants, and nearly 60 percent are undocumented.

“It’s tantamount to holding a political election and forcing voters of color to vote at the MAGA headquarters,” says Marc Grossman, the UFW’s longtime spokesman. “Farmworkers have seen peers get deported when they [publicly] stand up for their rights. The status quo doesn’t work, and hasn’t worked for a while.”

In cases where growers agree not to oppose unionization—a condition known as “labor peace”—AB 2183 would allow workers to unionize a worksite via mail-in ballots. When growers refuse to cooperate, the bill lets workers form a union by submitting a petition “with proof of majority support” in the workforce, subject to certification by the state Agricultural Labor Relations Board. Voting by petition, also called a “card check,” is a right enjoyed by California’s public-sector unions.

After passing the state legislature, AB 2183 now sits on the desk of Gavin Newsom, the state’s high–rolling Democratic governor, whose recently expanded Napa Valley winery, Plumpjack, relies on vineyard-tending farmworkers. (Newsom transferred his interest in the wine operations and related businesses to a blind trust on becoming governor in 2019.) The governor has until September 30 to sign or veto the bill. If he does neither, it automatically becomes law.

But Newsom nixed a similar measure last year, citing “various inconsistencies and procedural issues related to the collection and review of ballot cards” in his official letter to the Assembly. The UFW responded by organizing a protest march to the ultra-fancy Napa Valley restaurant French Laundry, a favorite spot of Newsom’s, and on to his nearby vineyard.

Gov @GavinNewsom vetoed #AB616, a bill to give us more choices to vote in union elections. We’d like to finally meet with him— we’ll be at The French Laundry soon.

Supporters will join us Saturday- if he’s not there, we’ll march to his Plump Jack winery.https://t.co/mBTk7MJu7C

As they did in 2021, farming interests—including the wine-grape industry—have lobbied hard against the current bill. In August, just before AB 2183 passed the Assembly, Newsom’s staff told the Sacramento Bee the governor “supports changes to state law to make it easier for these workers to organize,” but he couldn’t “support an untested mail-in election process that lacks critical provisions to protect the integrity of the election.”

This month, in a rare instance of a sitting president intervening in a state-level policy matter, President Joe Biden urged Newsom to sign AB 2183, declaring that the bill would “give California’s agricultural workers greater opportunity to organize and collectively bargain for better wages, benefits, and working conditions.”

Whatever he decides, farmworkers have been showing an increasing appetite for labor actions in the past couple of years. That’s according to Lucas Zucker, policy and communications director for Central Coast Alliance United for a Sustainable Economy, an economic-justice advocacy group based in an area with a high density of labor-intensive grape, strawberry, and lettuce operations.

Without a union, protesting farmworkers “often don’t have the kind of institutional strength to last beyond a couple of days, so they come and go.”

Zucker says the trajectory of farm labor organizing in California has has mirrored the broader plight of US private-sector unions. In 1970, roughly 29 percent of private-sector workers belonged to a union—today, that number is about 6 percent. The reason for the decline, according to a 2019 study from the Economic Policy Institute, was that employers dramatically ramped up anti-union efforts during the 1970s and used their political sway to tamp down pro-labor policies.

These anti-labor efforts hit farmworkers harder than most. “Immigration status plays a huge role, both in workers’ fear of deportation, but also because they’re excluded from the safety net,” Zucker says. “If you can’t get unemployment benefits because of your immigration status, you’re going to be a lot more afraid of losing your job due to due to retaliation for trying to form a union.”

He saw things begin to change during the pandemic, when workers who tend to live, work, and travel to job sites at close quarters were particularly vulnerable. (See this excellent 2021 piece on the topic by my colleague Julia Lurie.) Since the start of the pandemic, Zucker told me, farmworkers on the Central Coast have launched six informal strikes for higher wages and better Covid protections. Some of them won wage gains, but others “just fizzled—they don’t have a union, they don’t have a strike fund, they’re often getting retaliation, getting the sheriff called on them, things like that,” Zucker says. “They often don’t have the kind of institutional strength to last beyond a couple of days, so they come and go.”

There’s a debate over whether AB 2183 would indeed galvanize a new wave of labor organizing. In a September New York Times op-ed, California journalist Miriam Pawal, author of the 2009 book The Union of Their Dreams: Power, Hope, and Struggle in Cesar Chavez’s Farm Worker Movement, argued that the UFW “stopped organizing long ago.” Instead it focused on the “pomp and celebration of the marches” and lobbying the state Assembly. If it, or some other union, doesn’t commit “to the difficult work of real organizing” in the fields, no legislative overhaul of union voting laws would make a difference, she concluded.

California farmworkers command higher wages than their peers in most states, but not enough to cover the spiraling housing costs.

Grossman rejects the notion that the UFW has given up on organizing. “If workers come to the union and have grievances, the remedy is self-organization and collective bargaining—and this bill would make that tremendously easier, and would eliminate the abuse and intimidation that plagues the status quo enforcement of farm labor law,” he says.

In the meantime, insults to rank-and-file farmworkers are piling up. There are state rules mandating cool water, shade, and paid breaks during scorching weather, but Cal/OSHA, the agency charged with enforcing them, is woefully underfunded. In a state with as many 180,000 outdoor farmworkers during the high seasons, Cal/OSHA employs just 35 Spanish-speaking inspectors, according to a 2021 investigation by the California Newsroom. “Over the past 10 years—during a period when state regulators lowered temperature limits that trigger workplace protections from 85 to 80 degrees—nearly four dozen California workers died from heatstroke and other heat-related illnesses,” the report found. This year, California’s most intensive agricultural zone, the San Joaquin Valley, endured a series of brutal heat waves.

And while California farmworkers command slightly higher wages than their peers in most states, their pay does not keep up with spiraling housing costs. In all three of California’s most productive valleys—San Joaquin, Imperial, and Salinas—farmworkers tend to live in overcrowded, substandard housing, to which they have to devote a huge portion of their earnings. In his superb 2011 book Trampling Out the Vintage: Cesar Chavez and the Two Souls of the United Farm Workers, Frank Bardacke reported that by the mid-1970s, UFW organizing had gotten so strong that wages on some highly skilled farmworker crews earned $12 per hour—”more than 48 dollars in today’s money.” In 2022, the state’s farmworkers were making about $18.

Regardless of whether AB 2183 will spark a renaissance of farm-labor organizing, there’s a strong argument that Newsom should sign it. As a September 8 editorial in the Sacramento Bee put it, if the UFW has lost its will to organize, “then why the strong and stressed-out opposition from growers? If they [UFW] are no longer relevant, what’s the governor afraid of?”

The bill is certainly timely. Out on the farm, “there’s a lot of energy right now among workers” to fight for better conditions, Zucker says. “The fields are hot.”