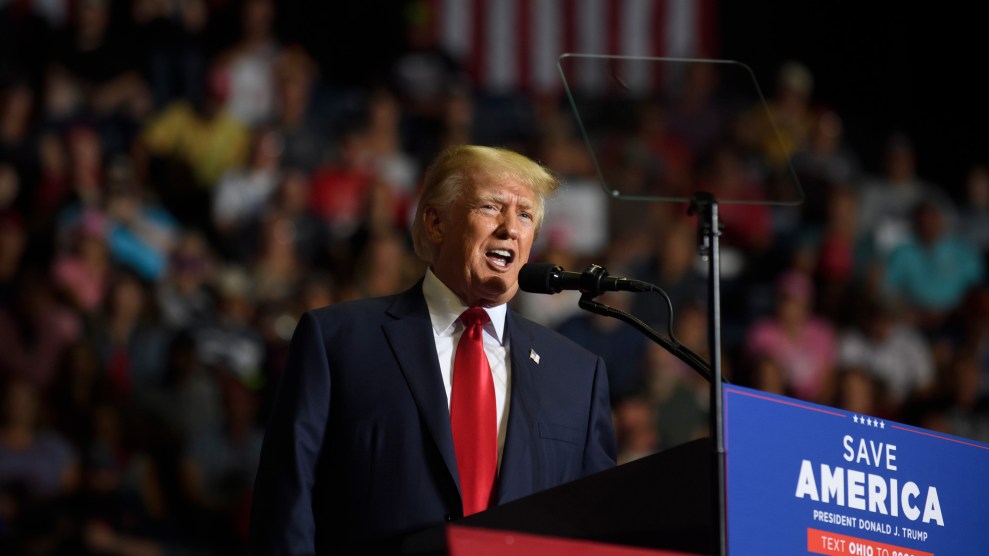 Trump at a rally in Youngstown, Ohio on September 17, 2022.Jeff Swensen/Getty

For years, conventional wisdom has held that Donald Trump could wriggle his way out of any personal jeopardy, no matter how evident his alleged malfeasance. But now there are signs he may finally be on the brink of a legal reckoning. Those signs are coming from Trump himself.

As the ex-president faces advancing federal and state investigations ranging from Mar-a-Lago to New York to Georgia, he has escalated an insidious form of political incitement, behavior that seems to signal a growing desperation over his legal predicaments. As I first reported beginning two years ago, Trump has long honed a rhetorical method that security experts call “stochastic terrorism”: By continually demonizing his “enemies,” he stirs random violence from extremist supporters as a means to exert and try to maintain political power.

Investigation of the January 6 insurrection showed the consequences of this technique on a mass scale—and further revealed Trump’s explicit willingness to resort to it after attempts to overturn the 2020 election via Congress and the courts had failed. According to sworn testimony from Cassidy Hutchinson, a former top aide in the White House, Trump knowingly urged armed supporters to descend on the Capitol that day and had wanted to lead them there. Ever since, Trump has successfully spread the use of incitement among GOP leaders, as I documented recently.

Repetition across various media is key to the technique and increases the likelihood of violence, according to recently published research from threat assessment experts. Trump has delivered on that in recent weeks: He has continued to target various agencies and individuals using his Truth Social platform, speeches at political rallies, and interviews on Fox News and other more fringe media outlets.

And he has used particularly grim rhetoric. At a Sept. 3 rally in Pennsylvania, Trump called the FBI and Justice Department “vicious monsters” and President Biden an “enemy of the state.” During an interview on a right-wing radio show on Sept. 15, he predicted there would be “big problems” in the country if he were to be charged by the Justice Department. “I don’t think the people of the United States would stand for it,” he told host Hugh Hewitt. On Truth Social, Trump promoted a QAnon meme featuring him as a heroic icon of the lunatic conspiracy-theory movement regarded by the FBI as a domestic terrorism threat. Soon thereafter, Trump gave an apocalyptic speech at an Ohio rally where he used music evoking a QAnon theme song, prompting fascistic salutes from the crowd.

“I really believe they hate our country,” Trump told Hannity.

Trump hammered home similar messages again on Wednesday in a lengthy sit-down at Mar-a-Lago with Fox News anchor Sean Hannity. Asked by Hannity to comment on a new lawsuit from New York Attorney General Letitia James over alleged financial fraud by Trump, the ex-president laid into the state’s top lawyer and her staff: “They were demeaning me constantly, these people,” he said. “There’s something wrong with them. I really believe they hate our country.”

His effort specifically to provoke feelings of contempt among his supporters is no accident and furthers the risk for violence. Elsewhere in the interview, Trump declared that the federal judge who approved the search warrant to seize highly classified documents stashed at Mar-a-Lago “took the case” because he “hated Trump.” The ex-president also demonized leaders at the National Archives and Records Administration—which has been targeted with vitriol since the Mar-a-Lago news broke—telling Hannity that the agency is run by “a radical left group of people.” Regarding the federal agents who entered his residence, Trump said the FBI has “attacked” and been “so horrible to so many people” he knows, and further claimed the agents showed up for the “raid” armed with AK-47s.

“There is a fervor in this country,” Trump emphasized to Hannity. “This country is so tired of this stuff.” (Sen. Lindsey Graham hit on a similar theme recently on Fox, forecasting riots in the streets if Trump is prosecuted.)

Earlier this week, January 6 committee vice chair Liz Cheney warned that Trump’s rhetoric about possible charges against him represents a “direct” and “credible” threat of violence to come. What form that might take and when is inherently unpredictable, a feature of the incitement method, not a bug.

Contra another truism about Trump—that there will never be a nadir with him—national security expert Juliette Kayyem wrote this week in the Atlantic that he may in fact be reaching rock bottom: “His overt adoption of QAnon shows that he has few alternative political strategies left to play… All he has left is violence, or the threat of it.”

If Trump’s options for protecting himself and preserving his political influence are indeed narrowing, that bodes well in that it suggests the rule of law eventually will prevail. But the further incitement to be expected from Trump as that process plays out, and the bloodshed and mayhem that could result, are another matter.