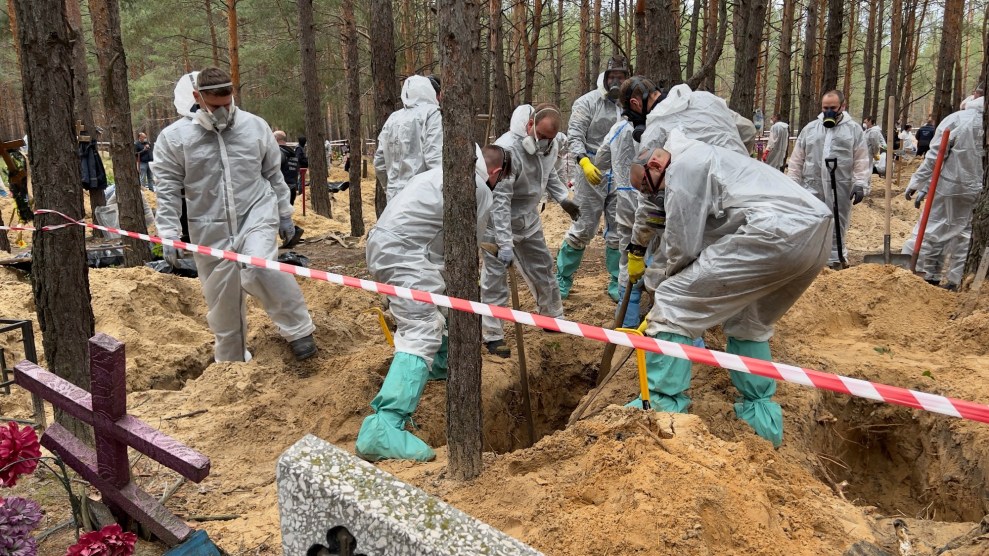 Investigators work to exhume bodies from a mass burial site in Ukraine.Pavel Nemecek/AP

On Friday, investigators working for the United Nations delivered a sobering statement to the UN Human Rights Council detailing evidence of Russian war crimes committed as part of the nation’s ongoing occupation of Ukraine, including the rape of children, torture, beatings, electric shocks, forced nudity, and the disappearance of people taken into Russian detention.

These findings came as part of the first official update from three experts who were asked to investigate allegations of war crimes that first arose this spring, soon after Russia’s invasion of Ukraine. Their investigation focused on four areas of Ukraine—Kyiv, Chernihiv, Kharkiv and Sumy—where horrific reports of alleged war crimes, including the rape of civilians and summary executions, began to emerge between late February and March of this year as Russia began its war. Friday’s report is the first from the UN to bring forth extensive evidence backing up these allegations, including through interviews with dozens of victims and witnesses.

“We are concerned by the suffering that the armed conflict in Ukraine has imposed on the civilian population,” Erik Mose, chairman of the investigative commission, told the UN.

Mose’s team told the UN they’d interviewed 150 victims and witnesses across 27 towns and settlements, studied documents, and inspected graves, weapon remnants, and places where detention and torture occurred. Across all this research, they found:

This UN report came out the day before the seven-month anniversary of Russia instigating the war in Ukraine, and at a moment when the conflict is at yet another inflection point. Last week, Russian President Vladimir Putin declared a partial mobilization for men of military age in Russia—what effectively amounts to a military draft of 300,000 people to replenish the manpower Putin needs to continue fighting against Ukrainians. His announcement spurred attempts by swaths of men and families to flee Russia.

Lines to cross into the neighboring countries of Finland, Kazakhstan, Mongolia and Georgia stretched for miles this week, while flights to nearby countries quickly sold out. Videos circulated on social media that appeared to show hours-long traffic jams of cars waiting to cross land borders out of Russia.

This is what is happening now on the border between #Russia and #Georgia.

Long lines of vehicles have formed at a border crossing between Russia's North Ossetia region and Georgia after Moscow announced a partial military mobilization. Report by @RTavisupleba pic.twitter.com/LyhxLUYRv3

Several Russian news sources, including Lenta and RBK, reported that flights to countries that allow visa-free travel from Russia, including Armenia, Turkey, Azerbaijan, and Georgia, had sold out within minutes of Putin’s mobilization announcement on Wednesday. The few remaining tickets that reporters at RBK could find online, for example, were for dates in late September, and cost upwards of $1,300.

“I am strongly against this war,” a male software engineer told CNN after successfully making it to Turkey from Russia. “Everyone I know is against it. My friends, my family, nobody wants this war. Only politics want this war.”

He added: “The only plan is to survive. I’m just scared”