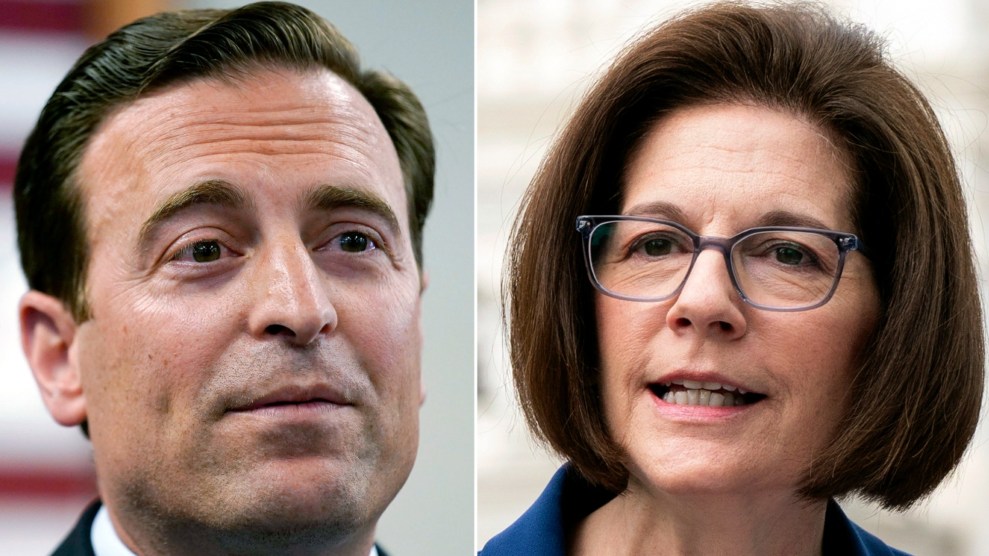 The day before early voting started in the battleground state of Nevada, Sen. Catherine Cortez Masto surrounded herself with Republicans and called out her Trump-backed opponent Adam Laxalt for embracing baseless allegations that the 2020 election was stolen. “There should be consequences for people who undermine our democracy and peddle the Big Lie and conspiracy theories and who are only out for themselves on the backs of other people, including Nevadans,” the Democratic senator running for re-election said at a news conference in Reno on Friday. “So it is time for us to get out and show who we are as a state and that we will not tolerate them.”

Laxalt, a former state attorney general, co-chaired Trump’s Nevada 2020 campaign and was involved in unsuccessful efforts to question the integrity of the state’s election and overturn the results. He has claimed there was no question the election was “rigged” and lamented Twitter’s decision to suspend the former president following the Jan. 6 insurrection. “That fateful day in January, when they pulled him off of social media and pulled him off of Twitter and people felt that in their stomach,” he said.

Meanwhile, Cortez Masto, the nation’s first Latina senator, has been actively campaigning on her adversary’s connection to the Big Lie and Jan. 6. This closely watched toss-up race could determine control of the US Senate, and Cortez Masto has been considered one of the most vulnerable incumbents. “Laxalt could not bring himself to show an ounce of remorse for his actions,” she said earlier this month. “It is unforgivable and Nevada will not forget his actions.”

At the event on Friday, Cortez Masto said, “Adam Laxalt, Donald Trump and others like them who peddled those lies and conspiracies right after the election fueled that violent mob.” She also described what it was like being in the Capitol on Jan. 6. “There were so many of us at that moment, living through it, that said, ‘Not on our watch. We’re gonna finish our job. They are not going to stop us from the peaceful transfer of power in this country and what our democracy stands for. We don’t care how long it takes to clear that Senate. We’re gonna go out and finish our job.’ And we did.”

The Reno Gazette-Journal reported that among the Republicans standing with Cortez Masto were Mike Haley, the former sheriff of Washoe County; Robert Cashell Jr., a businessman and son of the late Reno mayor Bob Cashell; and Rick Trachok, an attorney and former member of the Nevada System of Higher Education board of regents. “I think it’s important at this point in time for all Nevadans to reject election deniers,” Trachok said. “This is a cancer. It’s a cancer on the body politic.”

Trump recently appeared at a campaign rally for Laxalt and gubernatorial candidate Sheriff Joe Lombardo, where Trump stated that the Jan. 6 “crowd” who stormed the Capitol “were there largely to protest the corrupt and rigged and stolen election.” The latest polls show Laxalt leading the race by 2 percentage points.

“This is about standing up for our true democracy and calling out those who don’t and holding them accountable,” Cortez Masto said at Friday’s event. “The best way to do that right now is through our votes.”