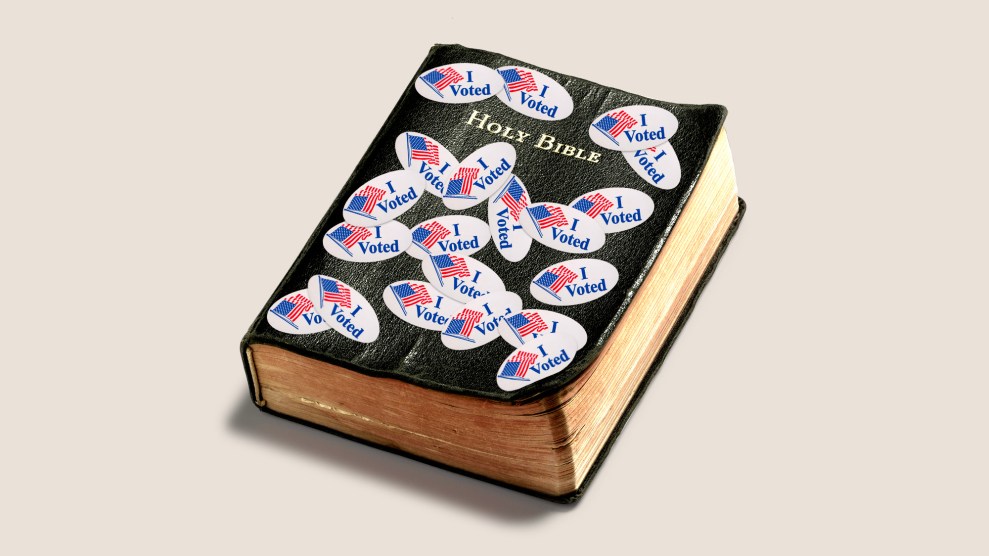 “You don’t need books!” shouts Pennsylvania state Rep. Stephanie Borowicz, waving a battered Bible. “This is the only book that’s alive and living!” Applause and cries of “amen” float up from the crowd around me.

I’m with about 60 others at a conference staged by Christians Engaged, a three-year-old, Texas-based outfit aiming to salt local government with “biblical” politicians. They’re part of a sprawling constellation of Christian nationalist organizations, operatives, officeholders, militias, lawyers, and fundraisers, whose tangled connections and hyper-local focus obscure a powerful, well-coordinated operation—perhaps the most tactically effective political project, left or right, in today’s United States. Christian nationalism, the movement to unite church and state, is hitting a new post-Roe stride.

Christians Engaged is an ostensibly non-partisan advocacy group, launched in 2020 by former GOP consultant and unsuccessful House candidate Bunni Pounds. But there’s its stated agenda—encouraging Christians to pray for elected officials, vote in every race, and engage with local civic life—and there’s the fact that every politician present is a MAGA election denier. From its Texas base, the group hosts regular podcasts and conferences featuring C- and D-list conservative celebrities like former Rep. Michelle Bachman and Rev. Rafael Cruz, Sen. Ted Cruz’s dad. They’re the “awakening church”, as opposed to the “woke liberal mob.” Now, Pounds says, they’re fighting for “hearts and minds” in battleground states like Pennsylvania.

That’s where the Christian nationalist emphasis on small-scale networking, coordination, and political education pays off. The conference is a chance for Christians Engaged, an out-of-state organization, to link up with area activists like Tabitha Valleau, an ally of viciously antisemitic Putin propagandist Charles Bausman. Valleau is a leader of Free PA, a local band of anti-vaccine election denialists. Her movement started out by organizing anti-mask protests—but, like similar groups, it’s grown in power and scope. Now, Free PA members have secured spots on local school boards and GOP committees, and they’re working to bring an immediate end to the state’s mail-in voting.

Central to the heart of the conference is a claim made by nearly every speaker: there is “no separation of church and state.” Speakers like Rick Green, “America’s Constitution Coach,” teach us how to sell that argument, using the writings of an evangelist whose work was pulled from shelves over historical inaccuracies—in other words, how to quietly rewrite the Constitution by blending fake news with the language of the Bible.

They, Borowicz says, hate the Bible: Democrats, COVID-conscious governors, librarians letting “pornography”—read: queer-friendly literature—into schools, trans people, pastors who didn’t fight lockdown orders, and Barack Obama, “the opposite of light.” (COVID, by the way, is “punishment for our sins.”)

Borowicz herself, of course, is part of the Christian nationalist renaissance—she took office in 2019, just before Pennsylvania swore in its first Muslim woman legislator. Borowicz wasn’t crazy about that. She shares the story with the crowd: “I saw all of those Muslims sitting there,” she says, “I got scared, and I just started praying.”

She delivered that day’s opening prayer, a headline-grabber that slid Trump, Israel, “God forgive us,” and thirteen invocations of Christ into two minutes. Even fellow Republicans gaped. The Council on American Islamic Relations offered one summary: a “mean-spirited, Islamophobic, anti-semitic, and xenophobic benediction.”

Borowicz and Valleau are here with a small crowd, but small is the point. The resources of groups like Christians United and Free PA aim for the most local kinds of power: school boards and county commissions, neighbors’ associations and PTAs, training would-be politicos—town-and-country politics, repeated in as many of our 3,000-odd counties as possible. It seems to be going great at the conference, where attendees in a mix of camo and Trump gear are fired up and networking.

It’s working even better from a bird’s-eye view: The network’s impact is nowhere more evident than in the gubernatorial campaign of state Sen. Doug Mastriano, who secured the Republican nomination solely through galvanizing these small but connected far-right groups. He was, not coincidentally, another 2019 arrival to the legislature. (Mastriano, whose platform makes Ron DeSantis look like Bob Dole, “used campaign funds to take busloads of Pennsylvanians to Washington” on Jan. 6, 2021, when he “personally and illegally crossed police barricades.” It’s downhill from there.)

The end result: More politicians in the mold of House Rep. Scott Perry, who kicked off the morning’s events. “Our country is in desperate trouble,” he tells the crowd. Well, no shit: that’s in no small part due to House Rep. Scott Perry, a key player in GOP attempts to overturn Trump’s 2020 loss. Perry was using his position of power to spread election conspiracies even before it was cool. When dozens more of him show up in local office—alongside more Mastrianos and more Borowiczes—the folks banning books and birth control will be running elections, too.

As the day winds down, we’re dismissed with a last message: “The Lord is coming.” They don’t say whether He’ll make it to their next conference.