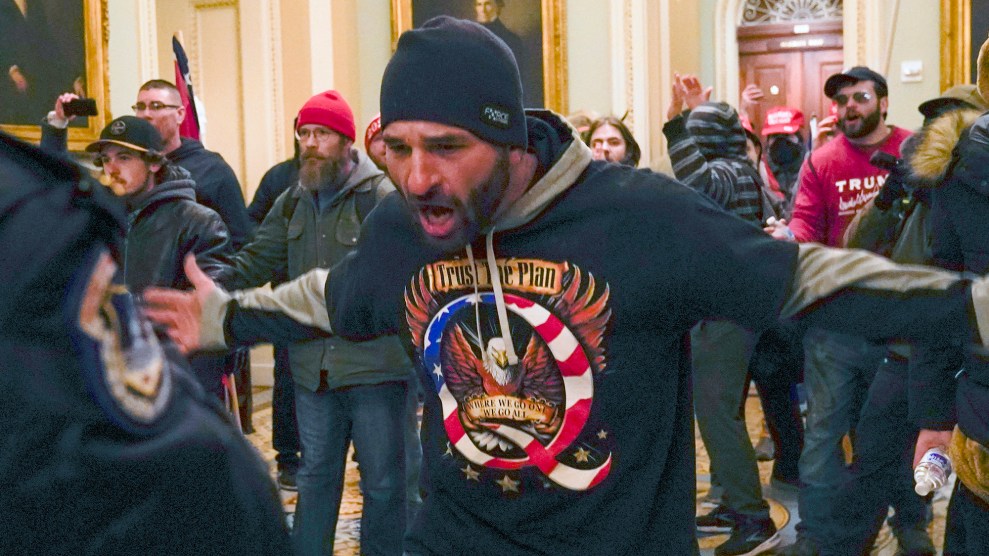 Doug Jensen, center, confronts U.S. Capitol Police in the hallway outside of the Senate chamber, during the January 6 attack. Manuel Balce Ceneta/AP Photo

David DePape, the man accused of bludgeoning the husband of House Speaker Nancy Pelosi early Friday morning apparently posted a lot of politically extreme things online and apparently subscribed to a lot of conspiracy theories. Among them: QAnon. According to the Associated Press, DePape wrote blog posts as recently as August 24 promoting the far-right theory:

An Aug. 24 entry titled “Q,” displayed a scatological collection of memes that included photos of the deceased sex offender Jeffrey Epstein and made reference to QAnon, the baseless pro-Trump conspiracy theory that espouses the belief that the country is run by a deep state cabal of child sex traffickers, satanic pedophiles and baby-eating cannibals.

“Big Brother has deemed doing your own research as a thought crime,” read a post that appeared to blend references to QAnon with George Orwell’s dystopian novel “1984.”

The suspect’s exact motivation has yet to be established. But this week’s attack on Pelosi’s husband isn’t the first time an apparent QAnon follower has allegedly targeted the House Speaker with violence. On January 7, 2021, the FBI arrested Cleveland Grover Meredith at a DC hotel after he texted friends that he was, “Thinking about heading over to Pelosi’s… speech and putting a bullet in her noggin on live TV.” Meredith had been planning to be at the Capitol on January 6 but had car trouble and never made it. The FBI found hundreds of rounds of ammo, guns, and an assault rifle in his trailer. In 2018, Meredith put up a billboard emblazoned “#QANON” that advertised his car wash in Georgia. When the Atlanta Journal-Constitution asked him about it, he said he’d been drawn to QAnon by “common sense.” In court, his lawyer said that Meredith had “found a sense of purpose” in the QAnon world. He was sentenced to 28 months in prison.

QAnon emerged in 2017 as an online phenomenon, with followers taking cues from the anonymous “Q” who posted cryptic messages on 8chan. But it has been bleeding into real life in a violent fashion. In 2018, for instance, a man drove an armored truck to the Hoover Dam claiming to be on a mission from QAnon to force the Office of the Inspector General to release the “real” report on Hillary Clinton’s missing emails, referring to another strand of the far-right conspiracy theory. He engaged in a standoff with police before finally being arrested.

In a report to Congress this week, the Department of Homeland Security and FBI warned that QAnon was one of a number of conspiracy theories specifically fueling domestic extremist violence in the US that also could pose a threat to the midterm elections:

We assess that adherence to elements of the continuously evolving QAnon conspiracy theory—some of which are bolstered by the resonance of election fraud narratives—will contribute to the radicalization and mobilization to violence of a small number of [domestic violence extremists], posing a threat to individuals and institutions that supporters of the conspiracy theory have prominently denounced. The participation of some self-identifying QAnon adherents in the breach of the US Capitol on 6 January 2021—who were arrested and charged with violent entry and disorderly conduct in a restricted building and obstruction of an official proceeding—underscores how some QAnon adherents can accept the legitimacy of violent action.

“By September 2021, the group had identified 101 QAnon followers who have committed ideologically motivated crimes.”

There have been so many crimes linked to QAnon that the National Consortium for the Study of Terrorism and Responses to Terrorism at the University of Maryland has set up a QAnon crime map to keep tabs on the problem. Not surprisingly, the center found that at least 60 percent of the QAnon criminal defendants had significant mental health issues, particularly the ones who were involved in murders. By September 2021, the group had identified 101 QAnon followers who have committed ideologically motivated crimes, including two who were involved in the QAnon precursor, Pizzagate.

That’s the earlier conspiracy theory claiming that the global sex trafficking ring was housed in the basement of DC’s Comet Ping Pong Pizzeria. In 2016, a man hoping to free the children walked into Comet and fired shots from an AR-15 before being arrested and eventually sentenced to four years in prison.

At least 61 people who participated in storming the US Capitol on January 6 were linked to QAnon, according to the center. Among those was Douglas Jensen, who was convicted last month of felony charges including assaulting a police officer. The Iowa man was wearing a “Q” hoodie when he led a mob up the stairs of the US Capitol in pursuit of Officer Eugene Goodman.

Other attacks have focused on the federal government elsewhere. On January 8, 2021, Cody Melby, a man in Portland, Oregon fired shots into the federal courthouse. Before the shooting, he posted a number of videos talking about QAnon. “QAnon, yes it is real,” Melby said in a July 25 YouTube video. “I have been working with them. So yes, it is real.”

More recently, Igor Lanis, a Michigan man shot and killed his wife and dog and injured his daughter last month before police killed him in a shootout. His other daughter blamed his obsession with QAnon for the violence. “I want the media to call out Q because this is all their fault,” she wrote on Reddit, describing how her father had gone down the QAnon “rabbit hole” after the 2020 election. “It’s like he got possessed by a demon.”