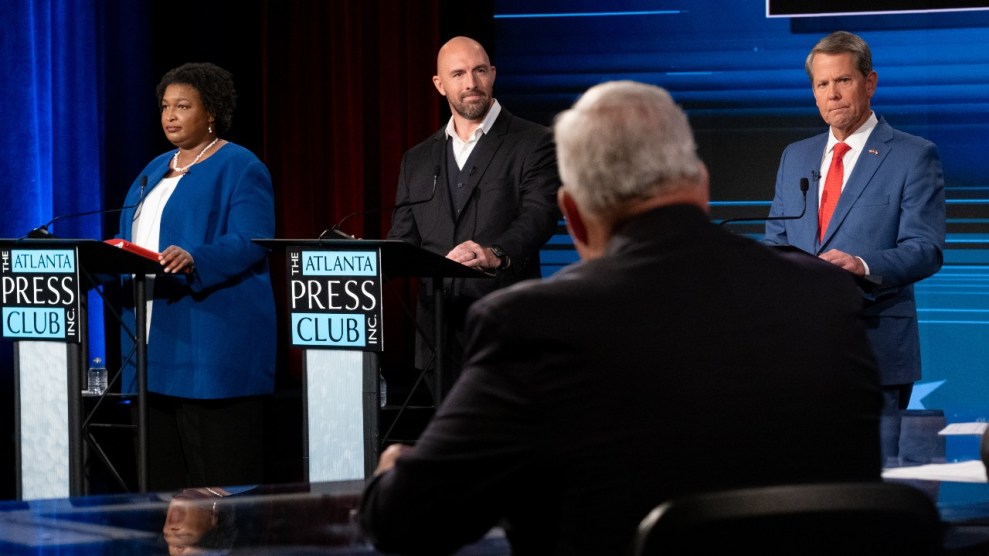 Monday was a busy day in Georgia politics.

In the morning, Georgians could begin early voting.

In the evening, Georgia could see their options for governor—Republican incumbent Brian Kemp and Democratic challenger Stacey Abrams—participate in their first televised debate since they both ran for the Georgia governor’s mansion in the contentious 2018 gubernatorial election.

The rematch race has been heralded as one of the nation’s most important gubernatorial contests, but it’s generally tough to oust an incumbent who lowered taxes, like Kemp has. According to polls averaged by FiveThirtyEight, Kemp is ahead of Abrams by more than five points.

But during the hour-long match-up, Abrams argued that Kemp hurt Georgians in other ways, such as by opting against accepting federal funding to expand Medicaid and by supporting laws that reduced voter access and reproductive freedom. “The most dangerous thing facing Georgians,” she said, “is four more years of Brian Kemp.”

In turn, Kemp said he delivered for Georgia by keeping businesses and schools open during the pandemic and building up a budget surplus of more than $6 billion. “If Stacey Abrams had been your governor over the last four years, you would not have that revenue,” Kemp said. “She wanted to stay locked down.”

Libertarian candidate Shane Hazel unintentionally made the case that third-party candidates polling in the low single digits probably shouldn’t be invited to participate in such debates in the first place, as Atlanta Journal-Constitution reporter Tia Mitchell smartly noted. For starters, he falsely claimed that COVID-19 vaccines killed a bunch of people.

Here are five key takeaways from the debate:

Was that a dog-whistle?

Outside of Hazel repeatedly talking over Kemp and Abrams and referring to Abrams by her first name (eventually the moderators shut off his microphone), the debate was fairly civil. Neither Kemp nor Abrams ever raised their voices—which is why it surprised me when Kemp, in a back-and-forth over how many members of law enforcement support each of their respective campaigns, said, “I know Ms. Abrams is upset and mad.”

During tonight's GA debate, Gov. Kemp used words like "angry and mad" to describe @staceyabrams. We know that these are racist and sexist attacks targeted at Black women. We’ve seen this time and again. There’s no place for this in our politics. #WinWithBlackWomen

I can’t discern his intent with the statement, and neither campaign immediately responded to my questions about it, but the words addressed to a very even-keeled Abrams evoked the racist trope of the “Angry Black Woman” for some viewers. And by the wide-eyed look on Abrams’ face after Kemp said it, it didn’t appear to sit right with her either.

How the candidates would address gun violence

Kemp said that much of the state’s gun-related crime had to do with gangs recruiting high-school aged children. He said his new public safety plan is “stiffening penalties for gang members that are recruiting our children.”

Abrams pointed out that street gangs were not behind the murder of Asian women at an Atlanta spa in 2021, or the cause behind most school shootings. “Street gangs are one part of the problem, but we have a governor who has weakened gun laws across the state,” Abrams said,  referencing a measure Kemp signed that allows gun owners to carry concealed handguns in public without first obtaining a license from the state.

“I believe that we can protect the second amendment and second graders at the exact same time,” Abrams added.

In 2018, Abrams lost to Kemp by fewer than 60,000 votes. She never fully conceded because she felt her loss was caused by widespread voter disenfranchisement. On Monday, she said voters were again facing unfair barriers to voting on the first day of early voting under Georgia’s new election laws, which limit access to voter drop boxes, among other things. “Just today a homeless woman was denied the right to vote in Forsyth County,” Abrams said, “because she could not receive a provisional ballot because she had been challenged.”

Kemp pointed out that under Georgia’s new voting laws, the state “had record turnout in the Republican primary and the Democratic primary. He added: “It’s easy to vote and hard to cheat.”

Georgia has amassed a budget surplus of roughly $6.6 billion since Kemp has been governor.

Abrams, who argues much of that money came from a Democrat-led US Congress, wants to use that money to increase the number of pre-K spots for children and provide teachers with $11,000 raises, noting a 67 percent retention rate in the profession.

Opposite viewpoints on Medicaid expansion

Abrams was keen to mention that Georgia is one of 12 states that have not accepted federal funding to expand Medicaid, which leaves more than 200,000 Georgians without medical insurance and causes financial strain on hospitals that treat many uninsured patients. “You have 19 hospitals at risk of closure joining the six hospitals that closed under this government,” said Abrams. “We are sending a Brinks truck of $3.5 billion of our money to Kentucky, to Louisiana, [and] to Ohio because this governor will not accept the money and the resources that we need in our state.”

Kemp noted that an additional 600,000 people have become insured through Medicaid since he has become governor, but claimed that Medicaid in general is a “broken government program.”