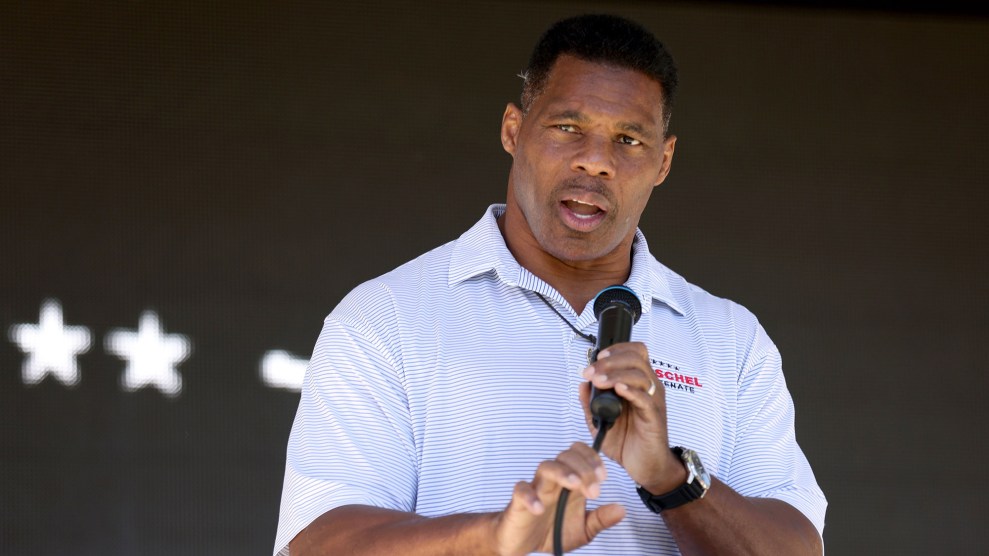 On Monday, the Daily Beast reported that Georgia Republican Senate candidate Herschel Walker—who supports forcing women to carry pregnancies to term with no exceptions, even if doing so could lead to death—once asked a woman he impregnated to get an abortion, and then paid for the procedure. Walker vowed that evening that he would sue the outlet the next morning, but hasn’t yet. The Beast followed up its scoop with more details—the woman who provided a copy of the $700 check, the receipt for the procedure, and a get-well-soon card allegedly signed by Walker, also went on to have a child with him.

Well, okay. Reaction from Georgia Republicans has spanned an illuminating range. The Georgia-based conservative commentator Erick Erickson said at first that it was old news. A Republican strategist granted anonymity by Politico so that they could speak like a complete knob, clarified that “it’s not that we knew about this specific case, but he’s a wealthy, famous football player who is obviously spreading his seed.” Another Republican official, likewise granted anonymity for apparently the same reason, told the Atlanta Journal-Constitution that the real problem was Walker’s son, Christian, a conservative influencer who condemned his father after the story came out: “He’s a spoiled brat and is solely to blame if Herschel loses the race.”

The company line from Walker’s camp is pretty straightforward, if not especially inspiring. It is basically, we expected this, because our candidate is Herschel Walker. But of course, Walker himself has not said this. Instead, he has embarked on a tour of conservative media’s slowest-pitch softball circuit, spreading more confusion with every subsequent interview.

His first stop, on Tuesday, was Sean Hannity’s Fox News program, the premier destination for what Semafor’s David Weigel refers to as “hannitizing.” Hannity offered several chances for Walker to explain himself and get his story straight, but Walker stubbornly refused to clear things up.

Did Walker know the woman making the allegation?

What about the card—had he sent it?

Well there was this matter of the check, Hannity said. Was there anybody Walker could remember sending money to?

“Well I send money to a lot of people, and that’s what’s so funny,” Walker said.

The next morning, Fox and Friends co-host Brian Kilmeade, evidently unsatisfied with Walker’s answers to Hannity, offered Walker another opportunity to get his message right.

Again Walker said he had no idea who the woman accusing him might be. “Everyone is anonymous and everyone is leaking and they want you to confess to something you have no clue about,” he said.

But was the card one that he’d sent?

“That looks like my signature,” he said. Then he quickly changed his mind. “First of all, I never just put an ‘H’ on anything, I never have. I said, you know, how many things I’ve signed but I’ve never just signed with just an ‘H’”

But Walker also started pushing a different line—he was a changed man, who had already been forgiven for his various transgressions. “I’ve been redeemed,” he said. “It’s like they’re trying to bring up my past to hurt me, but they don’t know that my past only energizes me to go out and fight even harder.”

“People see someone sitting here in front of you right now that’s been redeemed,” Walker added. “I’m living proof that you can make mistakes and get up and keep going forward.” In fact, his entire campaign, really, was about how the power of redemption, which was something he said that his opponent, Democratic Sen. Raphael Warnock does not understand. “You’re not gonna have a chance to be redeemed; he’s a minister—he don’t believe in redemption.”

Sorry, what were we talking about? Oh, right, the allegation that he’d paid for a woman to obtain a medical procedure he wants to criminalize, when he was 47 years old.

The next stop on the damage-control circuit was the talk-radio host Hugh Hewitt, who offered Walker a chance to comment on the Beast’s follow-up story.

“The anonymous woman has now also alleged that she had a child by you,” Hewitt said. “Your response?”

Walker’s response, again, was to both to deny the alleged facts and emphasize his redemption:

I say the same thing I said, that you know, I know this is untrue. I know it’s untrue, and they keep telling me things like that, and it’s totally, totally untrue. And I’m not sure why that would be told. I know nothing about any woman having an abortion. And they can keep coming at me like that, and they’re doing it because they want to distract people. I know that, because you know, I’ve already been forgiven. And if I’ve been forgiven, why in the world would I not be forgiven of something like that? And I’m not going to have been forgiven.

That response raised the obvious question, which Hewitt did ask: “Is there anything you need to be forgiven for vis-à-vis a woman whose name we do not know?”

Well, that’s what’s so funny. And I’m saying I’ve been forgiven because of all of the things I did when I went to my, the thing with my ex-wife and all that, and things I did I don’t know how many years ago that I wrote in my book. I forgot. I wasn’t perfect. I had my problem with mental health. And I was, I’ve been, I hate to say I’ve been born again, but I have a new life. And I’ve been moving forward, and had that happened, I would have said it, because it’s nothing to be ashamed of there. You know, people have done that, but I know nothing about it. And if I knew about it, I would be honest and talk about it, but I know nothing about that.

Okay then. Hewitt moved on to talking about the allegations made by Walker’s son, Christian, that Walker’s violent behavior had forced him and his mother to move six times in six months to avoid him, and that his family had begged Walker not to run for office.

But wait, Hewitt said, now as confused as all of us—was Walker saying that it wasn’t true that he had other children? (Walker only acknowledged having one child at the start of the campaign, but later acknowledged having four, in light of previous reporting by the Daily Beast.)

At a campaign event later on Thursday, Walker decided to take questions about the story from reporters. Yamiche Alcindor of NBC News and PBS asked Walker how he squared his comment to Hewitt—that there would be nothing to be ashamed of had he hypothetically paid for an abortion—with his position that abortion is a grievous sin that should be prohibited by the government. Walker claimed his remarks, which you’ll recall were specifically responding to a question “vis-à-vis a woman whose name we do not know,” were taken out of context, and that they were actually, in some vague way, about his ex-wife.

Herschel Walker told Hugh Hewitt this morning: “If that had happened, I would have said there's nothing to be ashamed of there.”

I just asked Walker to square that statement w/ his opposition to abortion.

Hope that clears it up.