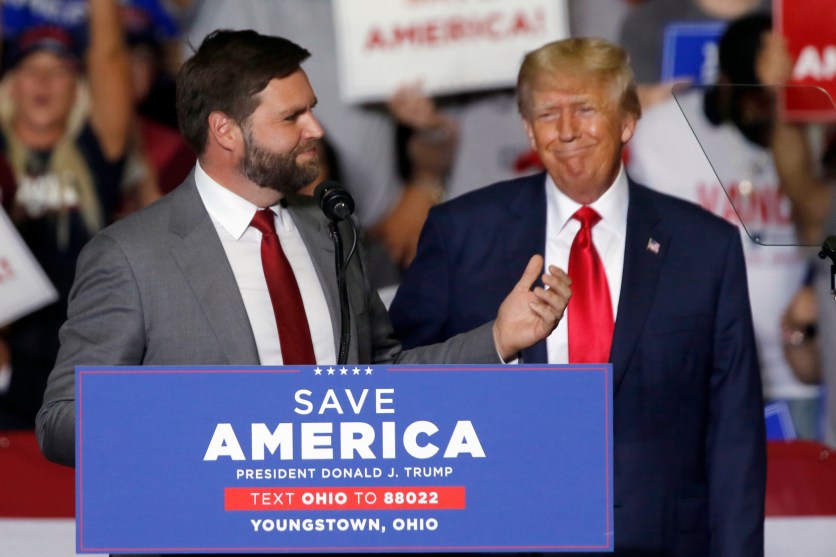 Editor’s note: This column by David Corn first appeared in his newsletter, Our Land. But we wanted to make sure as many readers as possible have a chance to see it. Our Land is written by David twice a week (most of the time) and provides behind-the-scenes stories about politics and media; his unvarnished take on the events of the day; film, book, television, podcast, and music recommendations; interactive audience features; and more. Subscribing costs just $5 a month—but you can sign up for a free 30-day trial of Our Land here. Please check it out. And please also check out David’s new New York Times bestseller: American Psychosis: A Historical Investigation of How the Republican Party Went Crazy.

When a coalition led by Mussolini fangirl Giorgia Meloni won the Italian election a few days ago and placed her on the path to becoming that nation’s first fascist-esque prime minister since Il Duce, I, like many other journalists, quickly engaged in tutorials on her rise to power. One especially frightening data point was a speech she had given outlining her conspiratorial view of the world. It’s worth quoting at length:

Why is the family an enemy? Why is the family so frightening? There is a single answer to all these questions. Because it defines us. Because it defines our identity. Because everything that defines us is now an enemy. For those who would like us to no longer have an identity and to simply be perfect consumer slaves. And so they attack national identity. They attack religious identity. They attack gender identity. They attack family identity. I can’t define myself as Italian, Christian, woman, mother. No, I must be citizen X, gender X, parent 1, parent 2. I must be a number. Because when I am only a number, when I no longer have an identity or roots, then I will be the perfect slave at the mercy of financial speculators. The perfect consumer. That’s the reason why, that’s why we inspire so much fear… We will defend God, country, and family. This thing that disgusts people so much. We will do it to defend our freedom. Because we will never be slaves and simple consumers at the mercy of financial speculators. That is our mission.

The new Prime Minister of Italy.

Meloni was saying that “financial speculators” were in league with woke activists to turn god-fearing Christian Italians into “consumer slaves.” Historian Michael Beschloss noted that “Mussolini enjoyed publicly referring to Jewish people as ‘financial speculators’ who needed to be controlled.” What makes this odious reference even more alarming is Meloni’s comment in another setting: “After our victory, you can raise your heads and finally verbalize what you always thought/believe in.” In her antisemitism-tainted speech, she was blending culture wars over identity with paranoia-driven, elites-bashing populism. This is nasty and dangerous stuff, especially given her party’s fascist roots and her explicit past enthusiasm for Mussolini.

As I read and pondered her mission statement, it rang a bell, and I recalled another politician who has been trying to conflate an economic populism of the right with culture battles over race and national identity: J.D. Vance, the author and venture capitalists who is the Republican Senate nominee in Ohio. He and Blake Masters, the GOP Senate candidate in Arizona, are both acolytes of tech billionaire Peter Thiel, an advocate of a bizarre blend of libertarian and nationalist notions. Thiel has committed tens of millions of dollars to supporting their campaigns. And this whole lot has been attempting to steer the Republican Party in an alt-rightish direction that in some instances seems friendly to authoritarianism. Seeking to understand this slice of the conservative movement, I’ve been scrutinizing Vance interviews, including a chat he had with conservative talk show host Bill Cunningham in the summer of 2021. Asked to explain Trump voters, Vance said:

What they were seeing happening was that on the one hand their communities were being decimated. They were closing manufacturing jobs. They were watching the rise of China, even as their own community declined. But on the flip side, this incredible political correctness was making it impossible to complain about it, right? If you complain about the southern border, you’re a racist. If you complain about our trade policies, you’re an idiot. If you complain about the fact that they’re teaching anti-American hate in our schools, then you’re a racist. And I think that people just got a little fed up that the country that their grandparents and parents had built was going to hell, and they weren’t allowed to say anything about it. And I think that’s really the underlying theme of [my] campaign. If we are to stop the economic plunder of this country on the one hand and if we’re going to stop the elites in this country telling you you’re not allowed to complain about it on the other.

This is rather deft demagoguery. Vance was contending that the elite plunderers were scheming with the woke crowd to shut up Middle America. With a veiled reference to critical race theory or perhaps the 1619 Project, he accused these connivers of using accusations of racism to stop folks—white folks—from complaining about the economic hardships they face. There was, in his view, no legitimate debate about race and America. Instead, unnamed fat cats assailed good ol’ patriotic Americans as racists in order to preserve their riches and to suppress these white Americans.

Cunningham cited Vance’s previous remark that CRT “is fundamentally an assault on the American founding and the people who founded the country and all the things that America has accomplished between the founding of the country and today. The left undermines America’s pride in their ancestry and history, their cross-generational story.” And Vance went on to insist that the left slyly deploys CRT and the issue of race to control decent Americans:

American patriotism is what gives us a pride of place in our own country. It’s what gives us this feeling that we belong to this country, that this country belongs to us, and that we have to build on it… And I think when the left attacks that and says, “Look this is an evil country, the founding generation were all white supremacists,” that racism is the foundational lie at the heart of America, what they’re doing is taking away that sense of pride of place that makes it possible for us to self-govern ourselves. Really what they’re doing, I think, is making us easier to control because the people who have no sense of where it came from have no sense of where it’s going. And that’s what the left is trying to do—turn us into a people that have no idea of what we’re here for or what we’re trying to accomplish.

The left, he claims, is trying to wipe out American patriotism and identity to oppress true-blue Americans. This is close to the conspiracy theory Meloni described: “financial speculators” and cultural leftists seeking to enslave Italians.

Vance spelled it out further, maintaining that the notion of white privilege “is a lie used to silence” his Americans:

Here’s what the elites do. When they say that those people are white privileged, they shut them up. Look, you’re unhappy about your job being shipped overseas? You’re worried that a lawless southern border is going to cause the same poison that killed your daughter to also affect your grandbaby? Don’t you dare complain about that stuff. You are white privileged. You suffer from white rage. You suffer from whatever ridiculous terminology you can apply. So I don’t think even they believe that. What they do is use it as a power play so they can get us to shut up. So they can get us to stop complaining about our own country. And they get to run things without any control, without any pushback form the real people.

This is a noxious formulation. Liberals and elites are cynically utilizing anti-racism to block real Americans from protesting the plunder of America by corrupt monied interests. What he would call political correctness is a cover for class warfare waged by the libs and the elites against the white middle class. Vance is melding the right’s crusade against wokeness with economic resentment, as he attacks nefarious enemies without identifying them. Who are the sinister players knowingly hurling false charges of American racism to prevent folks from questioning economic policies that have led to deindustrialization? Of course, Vance doesn’t say.

It’s intriguing to watch Vance, as a Republican, try to cash in politically on economic dislocation. The deindustrialization he bemoans traces back to the Reagan administration. And it is President Joe Biden and the Democrats who have attempted to assist the hollowed-out Midwest by passing a massive infrastructure bill and an economic package that will fund billions of dollars in energy projects throughout this region. Trump and the GOP did nothing like this when they had the chance. (How many infrastructure weeks were there?)

Vance, who has been endorsed by Donald Trump, is marrying legitimate and deep-rooted economic grievances with visceral cultural resentments, while much of his party tends to devote more energy to the latter than the former. There are many reasons why Americans ought to pay attention to the rise of fascism and right-wing extremism in Europe. One is to help us see what is happening within our own country. Now I’m not suggesting that Vance is a fascist like Meloni. But he certainly is playing with the same fire.