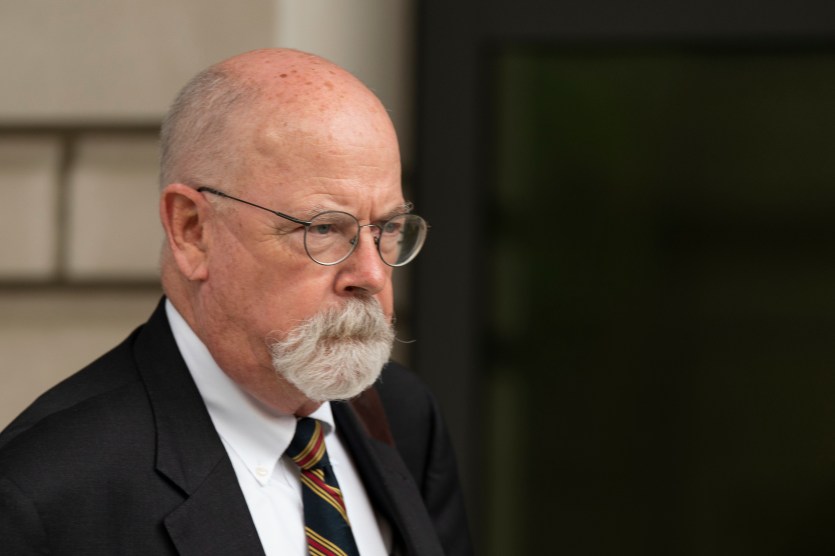 Editor’s note: This below article is a revised column that first appeared in David Corn’s newsletter, Our Land. The newsletter is written by David twice a week (most of the time) and provides behind-the-scenes stories about politics and media; his unvarnished take on the events of the day; film, book, television, podcast, and music recommendations; interactive audience features; and more. Subscribing costs just $5 a month—but you can sign up for a free 30-day trial of Our Land here. Please check it out. And please also check out David’s new New York Times bestseller: American Psychosis: A Historical Investigation of How the Republican Party Went Crazy.

John Durham, the federal prosecutor handpicked by then-Attorney General Bill Barr in 2019 to investigate the origins of the Trump-Russia investigation, flamed out this week, when he soundly lost another case in court, establishing an embarrassing 0-2 record in cases tried before juries. This verdict further discredited Durham’s crusade—much cheered on by Donald Trump and his cult following—to confirm Trump’s outlandish claim that the entire Russia scandal was a “hoax” mounted by the Deep State to sabotage him. After years of digging, Durham has failed to prove this baseless conspiracy theory advanced by Trump and his defenders to smother the narrative of Trump’s own treachery. Even worse for Trump, during this trial, Durham— intentionally or not—produced a bombshell confirming that Trump is a liar and that the proponents of the Russia hoax theory are hoaxers themselves. Few noticed.

Durham, who Barr secretly named as a special prosecutor weeks before the 2020 election, had been prosecuting Igor Danchenko—a US-based researcher who in 2016 supplied information to Christopher Steele that ended up in the so-called Steele dossier that assembled unconfirmed allegations related to Trump’s ties to Russia—for allegedly lying to FBI agents who had been investigating the dossier. It took the jury a little over a day of deliberation to find Danchenko not guilty on four counts on Tuesday. (The judge had previously tossed out one of the original five counts.)

This was a crushing defeat for Barr’s hitman—and for Trump. Yet after the first day of the trial last week, Trump defenders were enthused. Durham that day had called to the stand a senior FBI analyst named Brian Auten, who testified that the bureau had offered Steele “up to $1 million” to prove the charges in the collection of memos he had written for a research firm that was being paid by a lawyer working for the Hillary Clinton campaign and the Democratic Party.

Ah-ha! screamed the right-wing media (Fox News, the National Review, the Washington Examiner, and others) at this revelation. But Auten noted that no such sum was ever paid because Steele, as we already knew, did not corroborate the material in his memos. And as was already known (as Michael Isikoff and I reported in Russian Roulette: The Inside Story of Putin’s War on American and the Election of Donald Trump), the FBI did offer Steele a $50,000 contract in October 2016—after he had shared his memos with the bureau—if he would work with the bureau. But this contract, like the “up to $1 million” payment, never happened. (Auten testified that the giant reward would only have been paid out if Steele had been able to substantiate the information and if it had led to a successful prosecution.)

Trumpers pointed to the big-money offer as a sign the FBI was wrong to use information in the Steele memos to obtain a surveillance warrant for Carter Page, a onetime Trump campaign adviser who had visited Moscow in the summer of 2016. But we also already knew that the FBI screwed up bigtime in citing the Steele document in its application for the Page warrant. That misconduct was well covered in a 2019 report by the Justice Department’s inspector general.

Leaping on the $1 million factoid was just the latest move in the right’s never-ending campaign to bury the story of how Trump aided and abetted Moscow’s attack on the 2016 election—mounted in part to help Trump win—by focusing on the FBI’s misuse of the Steele dossier. Trump and his fellow Russia scandal denialists have obsessed over this FBI abuse—a side story—to deflect attention from the core elements of the scandal that include Trump’s own profound wrongdoing. (They routinely ignore the much-overlooked but damning bipartisan Senate intelligence report, released in 2020, that goes much farther than the Mueller report in detailing how Trump encouraged and sought to benefit from Putin’s clandestine operation and that concludes there was a “direct tie between senior Trump Campaign officials and the Russian intelligence services.”)

In hardly a surprising move, conservative outlets—and much of the rest of the media—missed a remarkable moment at the Danchenko trial concerning the Trump claim that the FBI’s Russia investigation was a “hoax” cooked up by the bureau (the Deep State!) to thwart Trump. This development was a surprise. When the abovementioned IG report declared that the probe had been properly launched based on reasonable concern, Durham took the unprecedented step of issuing a statement to challenge that conclusion. He declared that “we do not agree with some of the report’s conclusions as to predication and how the FBI case was opened.” That was quite a proclamation, and this remark heartened Trumpland, fueling hope that Durham’s investigation would rip apart the Deep State and prove that its Russia inquiry was rigged from the start and a complete fraud. Some Trumpists envisioned Durham indicting (and locking up!) FBI and CIA officials and top Obama administration aides.

Durham’s investigation never found anything of the sort. He nabbed an FBI lawyer who pleaded guilty to altering an email used to obtain the Page warrant. He lost his case against Democratic attorney Michael Sussmann, who he accused of lying to an FBI official during a conversation about data research that some cyber-experts believed indicated a backchannel between Trump and a Russian bank. (The FBI never found such a link.) Most important, none of this had anything to do with the legitimacy and provenance of the Trump-Russia investigation.

Neither did the Danchenko case, which focused on what Danchenko had told FBI agents about his involvement with the Steele dossier. (Despite Trump’s repeated assertions to the contrary, the Steele memos were unrelated to the opening of the bureau’s investigation.) Yet when Auten was on the stand, Durham asked him about the origins of the FBI’s Russia probe. As CNN reported, “Auten confirmed what has been known for many years: the probe was launched after the US government got intelligence from a friendly country that a Trump campaign aide had bragged to one of its diplomats that the Russians had offered to help Trump beat Hillary Clinton.” CNN added:

The situation was all the more interesting because Trump has repeatedly acted as a cheerleader for Durham and has said Durham will validate his suspicions about massive government misconduct regarding the Russia probe. On Tuesday, Durham inadvertently affirmed a basic truth about the Russia probe that Trump has lied about for years.

Read that again. Durham, the last great hope of Trump and all the Russian-hoax hoaxers, presented evidence that blew up Trump’s claims of a Deep State conspiracy and that even undermined Durham’s previous Trump-friendly statement. It was almost as if Durham had waved a white flag of surrender.

Of course, Durham considered Auten credible. He placed him on the stand as a witness for the government. So if you’re going to believe Auten regarding the $1 million claim, you have to accept his testimony about the legitimacy of the Trump-Russia investigation. Unless you choose to ignore it. Which is what the Fox News, National Review, and Washington Examiner stories did. The Washington Post account of Auten’s testimony also missed this key exchange. And the New York Times did not cover that day of the trial.

For years, Trump has insisted that he was the target of a phony investigation concocted by the Deep State. Barr essentially appointed Durham to find evidence of this. And Durham publicly suggested in 2019 that he had unearthed information that backed the notion that something was fishy about the origins of the FBI’s probe. Yet in what seems to be the final prosecution of his investigation, Durham produced testimony that supports the opposite and debunks Trump’s Big Lie about the Russia investigation. Oops?

Durham has not been Trump’s savior. He lost both cases that he brought to trial, and he ended up showing that Trump has been conning the American public about one of the most serious events of recent years: a foreign adversary’s attack on the United States. Acting as Barr’s henchman, Durham, though, has helped to divert attention from how Trump betrayed the United States. That has been a grand service for Dear Leader. Nevertheless, in the Danchenko case, Durham demonstrated that Trump’s claim of a hoax has itself been a hoax. That’s a far bigger story than the small-fry cases Durham prosecuted and botched.