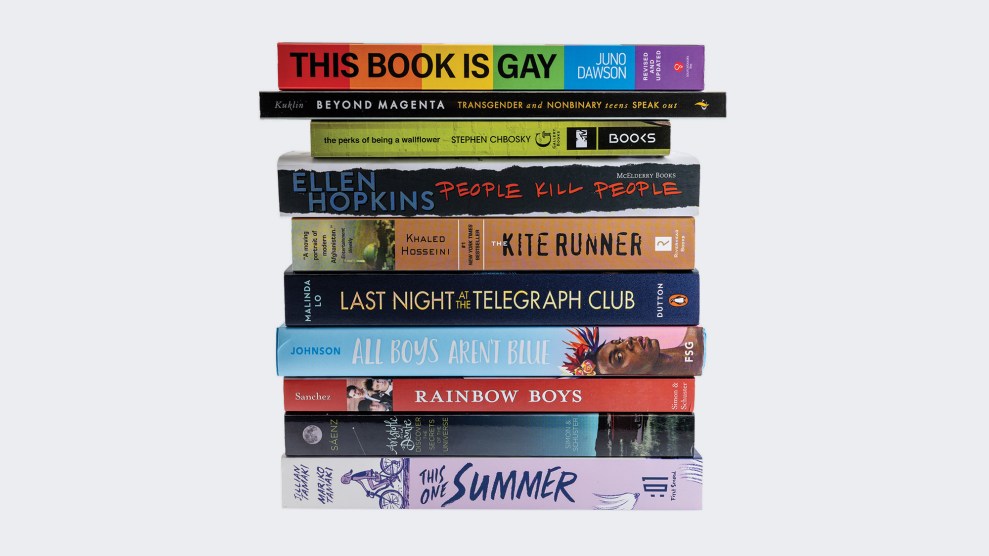 Some of the books Moms for Liberty has urged school districts to ban. Alex Ramos

Editor’s note: This short piece accompanied “The Most Powerful Moms in America Are the New Face of the Republican Party” in the November/December 2022 print edition of Mother Jones.

During a Moms for Liberty summit session called Gender Ideology in Our Schools, a presenter introduced a term I’d never heard before: “rapid-onset gender dysphoria.” She cited the work of a former Brown University physician and researcher named Lisa Littman, who, in a 2018 study published in the journal PLOS One, had argued that the increase in the number of children who are openly questioning their gender identity isn’t just a result of broader acceptance of trans and nonbinary people. Rather, Littman posited, gender dysphoria is spreading among children through peer networks, almost like an infectious disease. Littman’s ideas went viral: Joe Rogan devoted an episode to these concepts, Harry Potter author J.K. Rowling blogged about it, and Fox News’ Tucker Carlson called transgender identity among children an “epidemic.”

Social scientists, however, were skeptical of the study from the get-go: Chief among the methodological problems they identified were that Littman had interviewed parents, rather than transgender children themselves, and that she had recruited participants in the study in online communities that weren’t supportive of transgender people. After the paper was published, the journal issued a lengthy correction and apology. Major medical organizations, including the American Psychological Association, the Society of Behavioral Medicine, and the World Professional Association for Transgender Health, have rejected ROGD as a theory. But that hasn’t stopped parents’ rights groups from advancing their feverish crusade to rid schools of anything remotely friendly to the LGBTQ community, lest the “contagion” spread.

Over the past year, Moms for Liberty chapters have called for schools to ban or limit access to dozens of books for any mention of transgender or queer themes, including Khaled Hosseini’s The Kite Runner and George M. Johnson’s award-winning memoir All Boys Aren’t Blue. In August, a Virginia chapter helped push through a new rule that requires school libraries to email parents every time a child checks out a book, as well as sign a permission slip indicating that they approve of the class curriculum, according to the Washington Post. A leaked audio recording captured a member at a June chapter meeting in Cabot, Arkansas, fantasizing about shooting a school librarian who had defended the LGBTQ-friendly books that Moms for Liberty considered inappropriate: “I’m telling you, if I had any mental issues, they would all be plowed down by a freaking gun right now,” she said.

The attacks have progressed way beyond books. In April, the Moms for Liberty Twitter account accused the LGBTQ advocacy group The Trevor Project of “encouraging children to keep secrets from their parents.” In July, Twitter banned Moms for Liberty for a week after the group thundered against California’s gender-transition bill: “Gender dysphoria is a mental health disorder that is being normalized by predators across the USA. California kids are at extreme risk from predatory adults. Now they want to ‘liberate’ children all over the country. Does a double mastectomy on a preteen sound like progress?”

That same month, Moms for Liberty put up a post on its website accusing the American School Counselor Association of trying to “drive the Transgender Cult.” Tara Kierstead, a school counselor in Maine who has received hateful messages on Twitter for her advocacy for queer and transgender students, said that harassment from far-right groups has further eroded her vulnerable students’ sense of safety at school. “Bullying from a peer is one thing,” she said. “But bullying from full-grown adults is just out of this world.”

The same week, a Texas chapter hosted a meeting with Kelly Neidert, a 22-year-old infamous anti-gay activist who has railed against physicians offering gender-affirming care to kids and rallied followers to protest drag shows. In June, Neidert was banned from Twitter not long after she suggested “rounding up people who participate in pride events.” Kierstead worries that hateful rhetoric from groups like Moms for Liberty could have catastrophic consequences. “That’s why the suicide rates are so high in the population—it’s not because these kids are trans or gay or anything,” she said. “It’s because people are literally spewing hateful comments at them.”