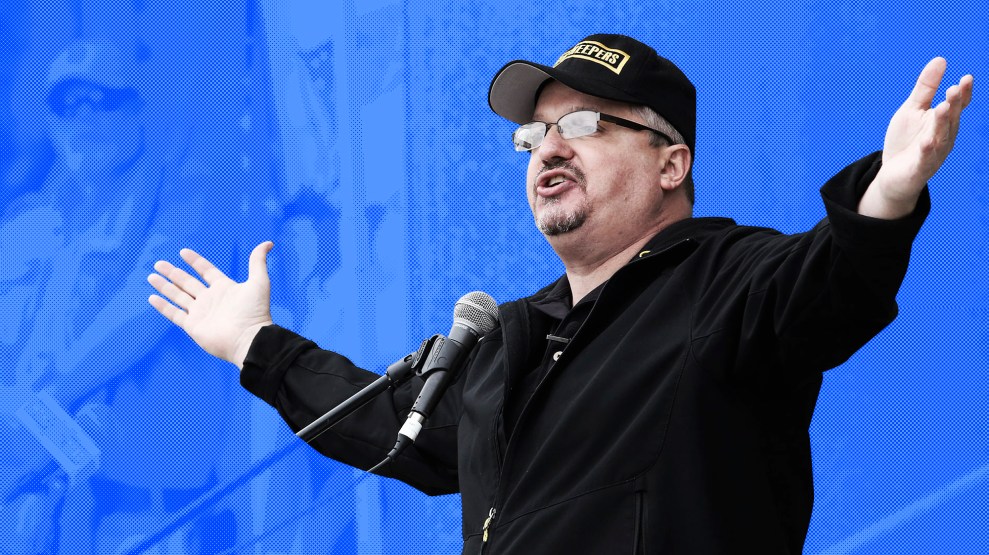 Justice Department prosecutors cited Mother Jones on Tuesday in the trial of Oath Keepers founder Stewart Rhodes. The defense had argued that messages Rhodes sent to a woman whom he later claimed was a lawyer for his far-right group were covered by attorney-client privilege. But based partly on my reporting, prosecutors deemed that argument a ruse.

Rhodes and four other defendants are on trial for seditious conspiracy and other crimes related to their alleged plan to storm the Capitol on January 6 to stop Congress from certifying Joe Biden’s defeat of Donald Trump. Evidence assembled by prosecutors includes texts Rhodes sent to Kellye SoRelle, a Texas attorney, in the weeks prior to the Capitol attack.

In one of those texts, dated December 29, 2020, Rhodes called past pro-Trump protests insufficient, writing: “They don’t give a shit how many show up and wave a sign, pray, or yell. They won’t fear us till we come with rifles in hand…Only reason to go is so Trump knows we support him in taking Reg gloves off and kickin ass.”

On Friday, lawyers for Rhodes and other defendants had objected to the introduction of that and other messages as evidence, saying the messages might be subject to attorney-client privilege. They were waiting for more information from prosecutors before formally asserting privilege, they said.

Covering the aftermath of January 6, I have talked to SoRelle a lot since last year. She recently told me something relevant to the present dispute: “I didn’t have an attorney-client relationship with Stewart.”

Kellye SoRelle is currently not commenting to press due to the charges against her, but has said: "I didn’t have an attorney-client relationship with Stewart." She also said that Rhodes only started referring to her as Oath Keepers' general counsel after Jan. 6 – "to CYA." https://t.co/kLsNZiLe0W

SoRelle has an eponymous law firm in Granbury, Texas, about an hour from Fort Worth, that does family, juvenile, and immigration law, she says. She met Rhodes in the spring of 2020, she told me, when both were involved in protests against Covid restrictions. Her link to Oath Keepers deepened when SoRelle, while acting as an election observer in Michigan, claimed she witnessed potential fraud. Her claims were swiftly debunked, but Oath Keepers, designating her a whistleblower, began guarding her. Eventually Rhodes was sleeping on her couch. After his arrest this year, he claimed, while unsuccessfully seeking release on bail, that he was in “a relationship” with SoRelle. She denies that.

“FROM STEWART…Do NOT chatter about any OK members doing anything at capital. Stop the chatter… Let me put it in infantry speak: SHUT THE FUCK UP!””

SoRelle told me she never acted as Rhodes’ lawyer before January 6, and that the only legal help she ever gave him was with his divorce proceedings—months after the attack on the Capitol. She acquired the title of general counsel for Oath Keepers only “after the sixth,” she told me, when Rhodes began “referring to me as that.” She was never paid by the group and did no legal work for them except limited bits of research last year, she added.

She said believes that her designation as Oath Keepers’ counsel was an effort by Rhodes, who expected he would be prosecuted for his role in the January 6 attack, to keep their communications hidden. “In my opinion, that was his attempt to CYA,” she said, using the acronym for “cover your ass.”

I tweeted about this Friday. DOJ cited that tweet in a motion on Tuesday. “The record appears to support that timeline,” prosecutors said.

The first known reference to SoRelle acting as a lawyer for the Oath Keepers was in a message she sent on January 8, 2021 to a Signal group chat called “Leadership Intel Sharing Secured.”

“As counsel for OathKeepers and as a potential attorney for you… please call me do not openly discuss legal concerns in the group,” she said, according to DOJ. “Everyone save my cell number…please distribute my cell to your peeps.”

“Stewart is not currently licensed as an attorney and is asking that all potential legal exposure issued be directed to me,” she later added.

SoRelle’s acceptance of that exposure has been consequential for her. Last month, prosecutors charged her with crimes including obstruction of justice. That was due to messages that she sent, apparently at Rhodes’ behest, telling Oath Keepers to delete any online comments in which they acknowledged involvement in the January 6 attack.

In a message she said came “FROM STEWART,” she wrote. “Do NOT chatter about any OK members doing anything at capital. [sic] Stop the chatter… Let me put it in infantry speak: SHUT THE FUCK UP!”

The same day, she added, again indicating the message came from Rhodes: YOU ALL NEED TO DELETE ANY OF YOUR COMMENTS REGARDING WHO DID WHAT… DELETE your self-incriminating comments or those that can incriminate others.”

SoRelle has not been charged with seditious conspiracy, but she has also been charged with conspiracy to obstruct an official proceeding. Prosecutors said in their filing Tuesday that she co-signed with Rhodes calls for Oath Keepers to take up arms to stop the transfer of power to Biden. If Trump failed to act, “we the people will have to fight a bloody revolution/civil war to throw off an illegitimate deep state/Chinese puppet regime,” they wrote.

DOJ lawyers also pointed to videos SoRelle posted on January 6, from a restricted area outside the Capitol, in which she cheered the mob storming Congress. “That’s how you take your government back,” she said. In another clip, she asked: “Think we can hang ‘til the 20th [Inauguration Day] or what?”

Summing up, prosecutors stated: “Rhodes’ communications to and from SoRelle were made not to solicit or provide legal advice; they were made to further the conspiracy.”