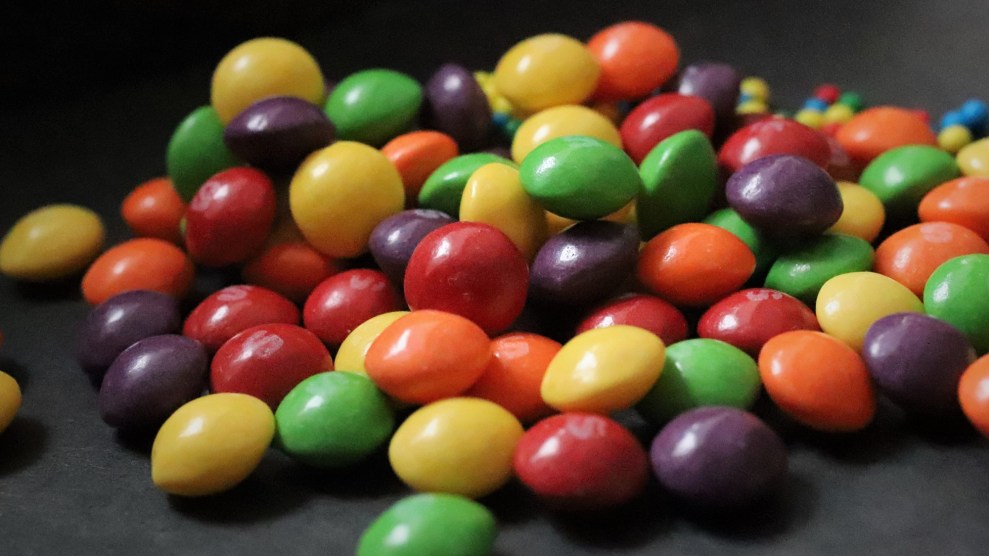 Conservatives are erroneously warning of fentanyl in Halloween candy.Angela Watts/Getty

On Friday, the Heritage Foundation tweeted a warning to parents: “The cartels are stuffing Skittles bags with deadly fentanyl,” the conservative thinktank wrote. “Happy Halloween from the Biden administration.”

The price of Skittles jumped ⬆️42% from last year. Not to mention the cartels are stuffing Skittles bags with deadly fentanyl.

Republican National Committee Chair Ronna McDaniel has also warned of fentanyl making its way into kids’ hands this October. “Every mom in the country is worried, what if this gets into my kid’s Halloween basket?” she told Fox News. Other Fox commentators even suggested parents skip trick-or-treating altogether this year.

But what could be worse than swaths of little kids in Elsa and Paw Patrol costumes inadvertently overdosing on fentanyl by consuming Halloween treats? Perhaps fear-mongering about something that is almost certainly untrue.

This particularly claim, which has been ricocheting around the right-ring echo chamber, appears to have its origins in statements made by the US Drug Enforcement Agency (DEA), which has found what it calls “brightly-colored fentanyl and fentanyl pills” in 26 states since August. “It looks like candy,” DEA Administrator Anne Milgram told NBC News. “In fact, some of the drug traffickers have nicknamed it Sweet Tarts, Skittles.” But while the DEA has stated drug cartels are using this “new method”—dubbed “rainbow fentanyl”—to make the drug “look like candy to children and young people,” experts simply don’t buy it.

“I don’t see any evidence that the DEA has produced that supports that conjecture,” Nabarun Dasgupta, a researcher studying illegal drugs at the University of North Carolina, told NPR.

Halloween candy mania is nothing new. For decades, people have been spreading old wives’ tales about razor blades and needles being found in Halloween candy. Almost every single case has turned out to be a hoax: often a result of the parents or children inserting these objects in the candy themselves. In 2015, a Maryland mother confessed to putting needles in her five-year-old daughter’s candy, after making up an elaborate story to police. That same year, two separate kids in Pennsylvania admitted they put needles in their own candy, after telling police they found the candy that way.

Colored fentanyl isn’t new, either. Earlier this year, two Maryland men were indicted by a grand jury for camouflaging and smuggling 15,000 fentanyl pills into Connecticut via Nerds and Skittles packaging, according to the U.S. Attorney’s Office for Connecticut. But if drug dealers are trying to make the synthetic opioid resemble candy, it’s more likely a tactic to evade identification by law enforcement officials rather than entice children. “I, personally, don’t think they’re being marketed to kids, but I think making them look like candy makes them easier to smuggle or hide,” Joseph Palamar, an associate professor in the department of population health at NYU Langone Health, told BuzzFeed News.

Overdose deaths related to Fentanyl are on the rise. Provisional data from the CDC’s National Center for Health Statistics show that fentanyl-related deaths rose from 57,834 in 2020 to 71,238 in 2021—a 23 percent jump. However, that has more to do with other drugs being cut with fentanyl than with new age groups experimenting with it.

Interestingly, though, this isn’t the first time Republicans have latched onto Skittles to sow fear. In 2016, Donald Trump Jr. posted a photo to social media suggesting that the US should not accept Syrian refugees.

“If I had a bowl of skittles and I told you just three would kill you, would you take a handful?” he said. “That’s our Syrian refugee problem.”

But if anything candy-related should cause parents a fright this Halloween, it’s that companies are price gouging—not that anyone is replacing expensive candy with even more expensive drugs. To its credit, the Heritage Foundation was onto something there with its Skittles tweet: Before stating that Skittles bags are being stuffed with fentanyl, it pointed out that cost of Skittles is up more than 40 percent since last year.

Do you know what has also increased by more than 40 percent?

“Do you know what’s scary?” he tweeted, “Corporate greed.”