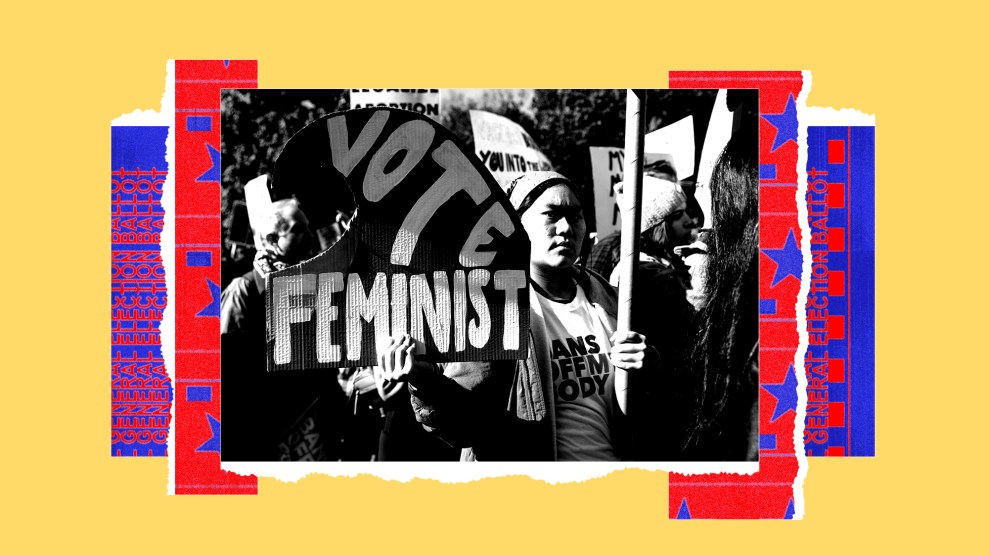 In state after state on Election Day, voters sent a resounding message: “Abortion rights matter to us.”

They didn’t only matter in California and Vermont, where voters chose to guarantee abortion rights in their state constitutions.

They mattered in deep-red Kentucky, where voters shot down a “no right to abortion” amendment that would have blocked the path to overturning the state’s zero-week abortion ban.

They mattered in battleground Michigan, where voters approved an amendment to enshrine “reproductive freedom”: not just the right to choose abortion, but to make one’s own decisions around prenatal care, contraception, sterilization, and miscarriage management. The amendment will ensure that courts there won’t allow a 1931 abortion ban to take effect in a state that has become a haven for out-of-state patients after Roe.

And abortion rights mattered in Montana, where voters rejected a referendum pushed by abortion opponents that would have increased penalties on doctors who did not perform aggressive medical interventions on infants. In Alaska, as of Wednesday morning, voters seemed unlikely to approve a ballot question opening a constitutional convention—a move that protects the constitution from anti-abortion changes.

If anyone thought Kansas’s abortion referendum was a fluke this summer—when voters overwhelmingly rejected a proposed constitutional amendment saying there was no right to an abortion in the state—Tuesday’s results should make them bite their lip. In every state with an abortion-related measure on the ballot, supporters of reproductive rights won the day.

“Reproductive freedom was a vote driver, as we’ve known all along,” says Mini Timmaraju, president of NARAL Pro-Choice America.  “Women and young Americans are responsible for the wins last night—and have essentially saved the party.”

Indeed, support for the right to choose appeared to be a major force behind Democrats’ better-than-expected results across midterms races. In addition to the ballot initiative in Michgian, Gov. Gretchen Whitmer campaigned to victory on protecting reproductive freedom, alongside state Attorney General Dana Nessel, who had pledged not to enforce an abortion ban. The fight over abortion rights in Michigan also helped Democrats gain majorities in the state legislature for the first time since 1984. “It wasn’t just the ballot initiative—it was the entire Democratic slate, and the entire legislature,” Timmaraju marvels.

Sarah Standiford, national campaigns director at Planned Parenthood Action Fund, says the organization will “increasingly” pursue ballot initiatives where it makes sense to do so. “Because ballot measures can ignite voter and volunteer engagement, as they did in Kansas and Michigan, they will be an essential tool,” she says. “They go beyond party lines and often receive a higher turnout than candidates.”

As Wednesday morning broke, more victories for the reproductive rights movement were racking up—especially in states where Republican gains in the legislature or state leadership would have opened a path for more abortion restrictions. In Pennsylvania, Kansas, and Wisconsin, pro-choice Democrats are projected to hold onto the governorship—ensuring that future anti-abortion bills will be vetoed. In the North Carolina and Wisconsin legislatures, Democrats appear to have blocked a Republican supermajority, preserving their governors’ veto power. (It’s not uniformly good news for the abortion advocates: state Supreme Courts races in Ohio and North Carolina will mean their states’ highest courts more likely to rule against challenges to anti-abortion laws.)

These results come despite last-minute handwringing from Democratic leaders and pundits that economic concerns would outweigh abortion in driving voters’ choices. Though economy and inflation were top of mind for the largest share of voters, abortion was the number-one issue for more than a quarter of people surveyed in NBC News’ exit poll. A full 60 percent of voters said they were angry or dissatisfied with the Supreme Court’s decision to overturn Roe v. Wade—and those voters overwhelmingly chose Democrats at the voting booth, according to the New York Times. In ABC News’ exit polling, 44 percent of voters between the ages of 18 to 29 picked abortion as their top issue, twice as many as those who picked inflation.

“When people talk about economy and inflation being a separate issue, we really need to remind elected officials that abortion is an economic issue,” says Standiford. “Decisions about whether to carry a pregnancy to term, or have an abortion, are really fundamentally about your future and about your family.”

None of the results Tuesday will immediately affect where people can get abortions. But the wins lay the groundwork for future expansions of reproductive rights—and throw up roadblocks to anti-abortion legislation in states where Republicans thought they might solidify control. Some important races are still to be called—especially in Arizona, a major battleground. In Pennsylvania, it remans to be seen whether Democrats will flip the statehouse. If they do, it will block a GOP attempt to put an anti-abortion ballot initiative to voters next year, according to Ianthe Metzger, director of state advocacy communications at Planned Parenthood.

Meanwhile, control of Congress is still up in the air. It’s looking unlikely that Democrats will gain enough power to codify Roe v. Wade after January. Legislation to do so—dubbed the Women’s Health Protection Act—passed the House this year but did not make it past the Senate’s 60-vote filibuster threshold. If Democrats gain two seats in the Senate, they’d potentially be able to eliminate the filibuster over the objections of Sens. Kyrsten Sinema of Arizona and Joe Manchin of West Virginia, and thus codify a national right to abortion.

Tuesday’s victories hold some lessons for the abortion rights movement—and for national Democrats. “We need to trust local organizers,” says Renee Bracey Sherman, executive director of We Testify, a group that promotes abortion storytelling. “They can turn out the voters for abortion even in some of the most conservative areas.” To Bracey Sherman, the success of candidates like Whitmer and Rep. Cori Bush (D-Missouri) amounts “tectonic shift.” Whitmer’s campaign highlighted real, individual abortion stories; Bush spoke about her own experience getting an abortion in a campaign ad. “This is the culture shift we have been pushing for,” Bracey Sherman says. “There’s been for a long time this idea of, ‘Don’t talk about abortion. Don’t say the word abortion. Try to bury it in euphemisms.’ I think that finally candidates are starting to abandon that old way of thinking.”