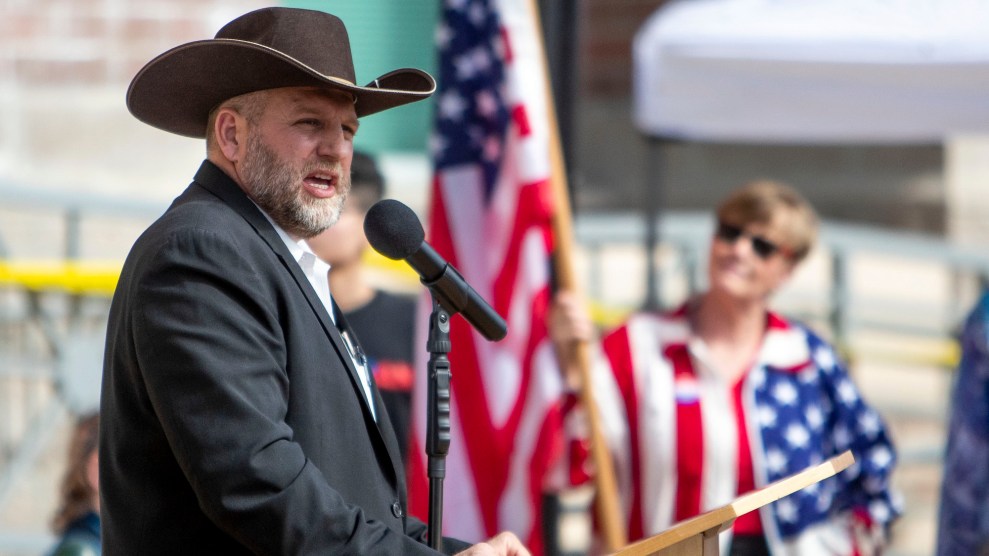 Ammon Bundy speaks to a crowd in front of the Ada County Courthouse in downtown Boise. Darin Oswald/Idaho Statesman via AP

Of all the far-right extremists on the ballot Tuesday, perhaps none had the bona fides of Ammon Bundy.

In 2014, he took part in an armed standoff with the Bureau of Land Management at his father Cliven’s Nevada ranch after agents tried to impound Cliven’s cows for his failure to pay 20 years worth of grazing fees. In 2016, he led a 41-day armed takeover of the Malheur National Wildlife Refuge in Oregon to protest the arrest of two ranchers. Bundy spent more than 600 days in jail, half in solitary confinement, awaiting trial on federal charges related to the standoffs. When he was acquitted by a jury in Oregon and freed after a mistrial in Nevada, it only contributed to his mythical outlaw status.

But then, a year and a half ago, in an unusual career twist, Bundy announced a run for governor of Idaho. He began as a Republican, then he switched to an independent when it became clear he’d lose the primary. On Tuesday, Bundy’s divinely inspired campaign came to an end. He finished in third-place.

Bundy’s campaign platform was extreme. It included criminalizing abortion, eliminating most “immoral” taxes, cutting welfare programs, seizing control of federal public lands in the state and turning much of it over to affordable housing development and extractive industries. His message was a motto: “Keep Idaho Idaho.” He proposed paying liberals to move back to California—an idea that resonated with a significant number of voters who have seen a huge influx of new residents push up housing prices. Bundy jumped on the hateful anti-LGBTQ rhetoric of the far right, calling trans people “groomers” and promising to put drag queens in prison if elected. In one of the weirder ads of the election season, he took on the “woke cult.”

But the outlaw candidate also ran a remarkably energetic, old-fashioned retail campaign of the sort rarely seen in the US these days. For more than a year, he has hosted an endless stream of town halls and in-person events across the state, gladhanding with the public, showing off his beautiful family, and relying on his personal magnetism rather than TV ads. On the trail, the former Virgin River Valley high school class president has seemed to be enjoying himself immensely.

In December 2021, Bundy even tried to convince a judge that the more than 1,600 hours he’d spent attempting to become governor last year should count towards the community service he was sentenced to do after he was convicted of obstructing the police during his August 2020 trespassing arrest at the Idaho state capitol last year. Bundy had led a group of armed protesters into the capitol while the legislature was considering measures to address the Covid pandemic. When he refused to leave, police arrested him for trespassing and wheeled him out of the building in an office chair after he went limp and refused to cooperate.

Bundy’s critics rejoiced in a defeat they saw as a triumph of democracy. “It’s heartening to see Idaho voters decisively reject Ammon Bundy’s attempt to build power for his anti-democracy aims,” said Amy Herzfeld-Copple, the deputy director of programs and strategic initiatives at the civil society advocacy group Western States Strategies. “Idahoans continue to make clear that Bundy’s and his supporters’ harassment and intimidation of communities and civic institutions have no place in the Gem State.”

And yet, the election may prove to be a victory for Bundy himself. He made a remarkably good showing in his adopted state, where more than 100,000 people voted for him, about 17 percent of the total vote. The Democrat in the race, Stephen Heidt, only managed to get 20 percent. (Incumbent Republican Brad Little sailed to victory with the other 60 percent of the vote.)

“It’s really significant to look at any third-party candidate that gets that high of a percentage,” says Donald Haider-Markel, a political science professor at the University of Kansas who has studied political extremism and was surprised by Bundy’s performance “It’s not trivial.” Haider-Markel says third-party candidates, and even ones in Idaho, are usually lucky to crack two percent in any given election. (Ammon’s brother Ryan Bundy, in fact, garnered just about that much of the vote when he ran for governor of Nevada in 2018.)

“My guess is that this is a huge boost and validation for Ammon Bundy,” James Skillen, a Calvin University professor and author of This Land Is My Land: Rebellion in the West, told me in an email. “It will probably increase demand for him (and the fees he commands) on the right-wing speaking circuit, and it sets him up for future forays into political office. The big question/uncertainty centers on what he will choose as his focal issue. He gained recognition around land issues. He built his Idaho political reputation opposing COVID measures and parental autonomy. What will he pick next?”

The gubernatorial campaign embodied all of Bundy’s contradictions: It was earnest, even hokey, at times. He held black-tie affairs advertised specifically as kid-free, in an appeal that only makes sense if you know his Mormon culture. In an email invitation to a “Christmas Evening Black Tie Affair,” which promised a “fancy Christmas dinner with music and entertainment,” the father of six wrote, “I thought it would be a good way to raise funds and also provide an excuse for couples to dress nice and enjoy each other with friends.”

Bundy as a gubernatorial candidate was potentially even moderating. “Given Ammon Bundy’s past, it is not necessarily a bad thing that he is currently spending much of his energy running for office,” said Mark Pitcavage, a senior research fellow at the Anti-Defamation League’s Center on Extremism told me last year, “as opposed to engaging in armed standoffs with the government.”

After federal prosecutors failed to convict him of any of the federal charges related to his involvement in the two armed standoffs, Bundy seemed to be at loose ends in 2019. He hit the far-right lecture circuit and was spending his time parachuting into one small property rights conflagration after another, looking for the next big outrage for his armed flash mobs but not finding it. The pandemic gave him a renewed purpose by creating a host of new forms of government tyranny for him to fight against.

In 2020, he launched what the Los Angeles Times dubbed his “Uber militia,” a hyper-local group called People’s Rights whose members could be mobilized through text messages and deployed, often heavily armed, to protest at a moment’s notice. They were a regular presence at anti-mask and anti-vaccine events over the past two years and threatened to turn a drought-related water crisis in Oregon into a tinderbox.

But Bundy stepped away from the group when he ran for office and People’s Rights has been less active without him, particularly as the pandemic has ebbed. He has only been arrested once this year, in March, when he organized a protest at St. Luke’s Hospital after child welfare authorities called police to take custody of a 10-month-old baby suffering from malnourishment. The baby was the grandson of one of Bundy’s biggest supporters and his parents had failed to appear for medical appointments. (The hospital is now suing Bundy for launching a “dishonest and baseless smear campaign” against the institution, accusing it of “widespread kidnapping, trafficking and killing Idaho children.”)

Now that he’s lost the election, Bundy will have a lot of time on his hands. He didn’t respond when I asked him what he plans to do next, so I asked Betsy Gaines Quammen, the author of American Zion: Cliven Bundy, God & Public Lands in the West who knows Bundy, what she thought he’d do. “I think this will empower him for the foreseeable future—he’s now well known in the state,” she told me. “He’s ambitious, mission driven, and has a profile. I’m just not exactly sure what he’ll do with his momentum, but he’s not going anywhere.”

“Bundy is an opportunist,” says Devin Burghart, president of the Institute for Research and Education on Human Rights, a nonprofit watchdog that monitors far-right extremism that first raised alarms about Bundy’s People’s Rights. “He’ll go where he can get attention.”

Correction, November 14: Devin Burghart was misspelled in an earlier version of this article.