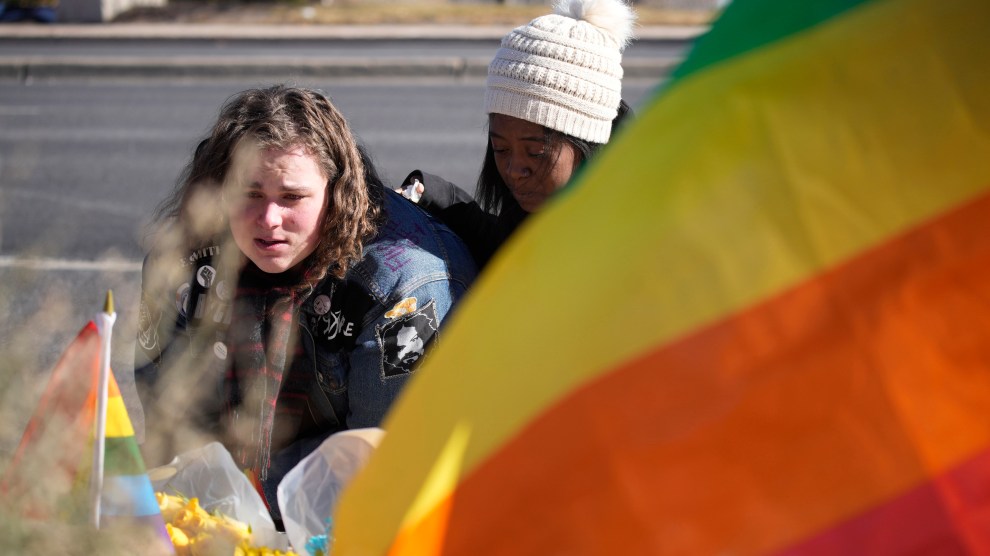 The man suspected of killing five people at a gay nightclub in Colorado Springs on Saturday night faces preliminary charges of murder and hate crimes, suggesting that officials believe he may have targeted victims based on their sexual orientation or gender identity.

“It’s important to let the community know that we do not tolerate bias-motivated crimes in this community, that we support communities that have been maligned, harassed, and intimidated and abused,” El Paso County District Attorney Michael Allen said at a press conference Monday. “If there’s enough evidence to support that in this case, when we get to the formal filing charges, we will absolutely be including those charges here.”

Some lawmakers, like Colorado Gov. Jared Polis, who is openly gay, were quick to recognize how the shooting felt like an attack on the LGBTQ community. “Colorado stands with our LGTBQ community and everyone impacted by this tragedy as we mourn together,” Polis, who is currently recovering from Covid, said in a statement.

Horrifying news out of Colorado Springs this morning. My heart goes out to everyone who lost loved ones and the entire LGBTQ+ community after last night’s attack. I stand with all those condemning this hatred and violence.

But a number of Republican politicians, including those have stoked a moral panic about “grooming,” have stuck to broad generalizations, making it appear that they’re conveniently avoiding the topic of gender identity. To be fair, these reactions were posted before information about the motivations of the shooter had come to light; there’s still a lot we don’t know. But either way, social media users were quick to point out that these Republicans’ omissions couldn’t obscure their histories of stirring up hatred against the LGBTQ community.

Rep. Doug Lamborn (R-Colo.), who represents Colorado Springs in Congress, opposes same-sex marriage and repeatedly sought to defund PBS because of its portrayals of LGBTQ individuals in series like Prideland. After the shooting, Lamborn issued a generic response urging people to “pray for the victims and their families.”

I am saddened to hear of the senseless loss of life in the shooting last night. Law enforcement and first responders are to be commended for their rapid response.

All people should pray for the victims and their families.

Rep. Lauren Boebert (R-Colo.), whose district encompasses land to the west and south of the Springs, has frequently spewed anti-LGBTQ rhetoric, from calling the Equality Act “supremacy of gays” to denigrating the discussion of sexuality and gender identity with kids as “grooming.” “This lawless violence needs to end and end quickly,” she wrote, without specifying how one might bring gun violence to an end, or acknowledging how anti-LGBTQ rhetoric can galvanize far-right extremists into attacking gay and trans communities.

The news out of Colorado Springs is absolutely awful.

This morning the victims & their families are in my prayers.

This lawless violence needs to end and end quickly.

Perhaps the most offensive response came from outside the state. Rep. Marjorie Taylor Greene (R-Ga.) has made myriad gestures against the LGBTQ community, from backing an anti-trans bathroom bill to calling trans women “men playing dress-up” to claiming that straight people face extinction. Yesterday, she took to her once-banned Twitter account—recently restored by Elon Musk—to exercise a truly astounding feat of whataboutism:

Tragically, 300 Americans die of fentanyl poisoning everyday in America and Biden says and does nothing.

Tragically, 5 people were killed in a shooting in Colorado and Biden immediately demands a ban on assault weapons.

Where to begin? The recreational use of fentanyl, unlike assault weapons, is already illegal. Plus, President Biden has taken steps to limit fentanyl poisoning, including allocating funding for harm reduction programs to allow drug users to access fentanyl test strips. And while drug overdoses are a tragedy, they don’t appear to have much of a connection to the weekend’s violence. Like much of what Greene says, the logic here doesn’t add up.

It seems like these Republicans are truly taking the “Don’t Say Gay” edict to heart.