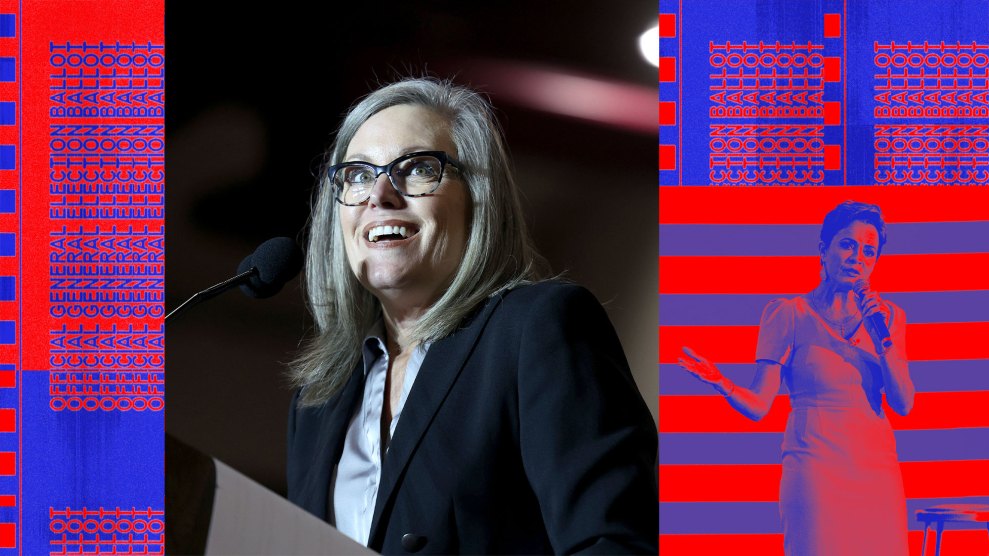 In the final days before the midterm election, Kari Lake, the Republican nominee for governor of Arizona, filmed an unusual series of ads. They weren’t about high gas prices in the state, or public schools, or crime. They weren’t even about the Arizona governor’s race at all. Speaking directly to the camera, Lake addressed Republican voters in Michigan and Pennsylvania, and asked them to elect Tudor Dixon and Doug Mastriano—election-deniers running for governor in their respective states.

In a year in which Republicans expected big things, the ads are an artifact of a wave that never really came. Mastriano and Dixon lost their races handily. And on Monday, Lake finally lost too, in a close race against the current secretary of state, Democrat Katie Hobbs. Lake had presented an image of confidence in not just a win, but a big win, insisting that late-counted mail ballots would break heavily her way. But it wasn’t enough. Democrats will now hold a share of power in Arizona for the first time since 2009, when then-Gov. Janet Napolitano resigned to serve as Barack Obama’s secretary of homeland security. They gain a crucial check on the legislature in a state that’s been an incubator for right-wing politics. It was one final blow to the Republican party’s coup caucus, in an election that in many ways turned into a referendum on them.

A former local news anchor, Lake questioned Fox News’ decision in 2020 to call the state for Joe Biden relatively early on election night—days before most other news outlets did. She quit the profession a few months later. Her candidacy, particularly during the primary, aggressively channeled anger among conservatives clinging to false allegations of mass election fraud and malfeasance. She demanded an audit of the 2020 results and said that Arizona’s election should be formally decertified. “You have to be smoking Hunter Biden’s crack pipe” to think Biden won the state, Lake said last year. For months, she promised that the very first thing she’d do when she took office was begin a formal investigation into what really happened. She held an event at a roadside rodeo with Mike Lindell. She called for Hobbs, who had overseen the 2020 election, to be jailed.

As I explained in a recent profile,  Lake’s campaign was powered by her career in local TV news. She very deliberately positioned herself as not just a rising star, but as a political exile from a “corrupt” industry, who was using the trust the industry had bequeathed her to tear down her former colleagues. She hammered home the sort of themes that tend to dominate local TV news:

Win or lose, Lake is the embodiment of both the style and substance of the politics that’s powering conservatism at this moment—screen-tested showmanship with A-block sensibilities: perps on the streets, pervs in the schools, and pain at the pump. In 2010, anger at health care reform, Wall Street bailouts, and a Black president powered a Republican landslide that set the terms for the decade ahead. But in 2022, Trumpism turned maximally inward. Joe Biden is largely absent from this year’s narrative. On the campaign trail, his infrastructure and climate laws are rarely mentioned. Instead, conservative campaigns have been powered by panics, real and imagined.

Hobbs—the person Lake wanted to jail—could hardly have been more different. Elected in 2018 by a margin of just a few thousand votes, she was an understated presence who was criticized by some Democrats for not being visible enough in the campaign’s final weeks. She ran on her work in safeguarding the democratic process in 2020; on protecting reproductive rights in the state (where an 1864 law could ban all abortions except to save the life of the mother, if the state supreme court upholds it); and as a fairly moderate presence that you could trust to not be Kari Lake. These things evidently mattered more in 2022 than crowd sizes, just as they did in 2020.

Arizona, Lake would tell the crowd in a pre-recorded video that played at the start of every event, was a “red state.” It represented a key distinction between the two parties and their approach to this election. Despite their recent successes there, Democrats had no such arrogance about what it takes to win. Hobbs needed all of her party to show up. She needed the support of Mexican Americans, Native voters, college students, and unions. She needed the work of groups like LUCHA, which got out the vote for much of the Democratic slate while also pushing a ballot initiative to give in-state college tuition to non-citizens. (The referendum appears to be on track to do slightly better than Hobbs herself.) But to clear the final hurdle, the Democrat was also counting on the sorts of independent voters and non-MAGA Republicans who had helped elect Biden and Sens. Kyrsten Sinema and Mark Kelly—along with the current Republican governor and a certain POW-turned-Republican-senator before that.

Lake, on the other hand, was so confident about her state’s true politics, so steadfast in her belief that Democrats’ 2020 breakthrough wasn’t legitimate, that she made an unusual request to voters at a campaign event last December.

“We don’t have any McCain Republicans in here, do we?” she asked. There was a loud of chorus of boos. “Alright, get the hell out!”

On election day, they did.