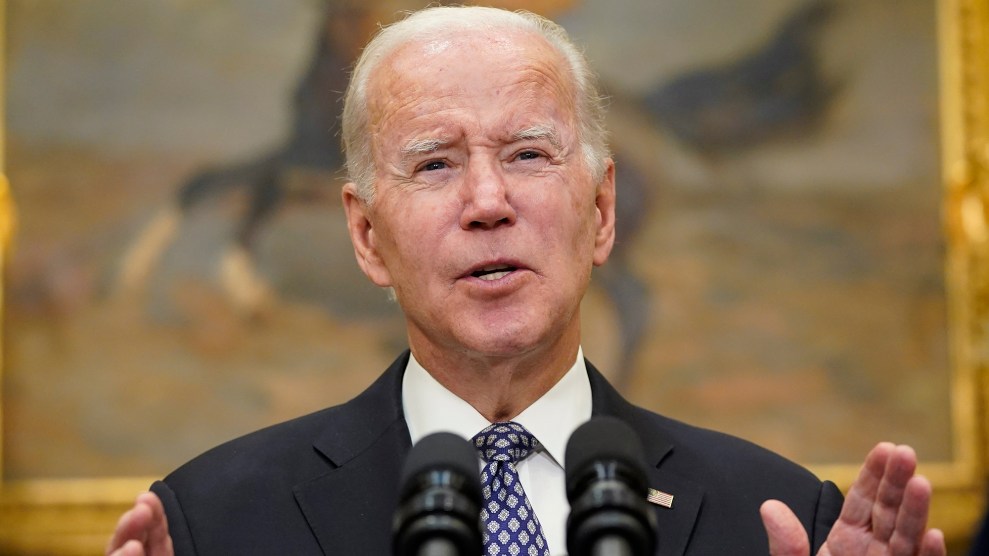 President Joe Biden on Monday threatened to pursue new legislation that would tax the windfall profits made by fossil fuel companies this year if they don’t ramp up production to help bring down the historically-high energy costs being felt by everyday Americans.

While Biden’s announcement primarily took aim at inflation, which polls suggest is the biggest issue threatening Democrats in the next week’s midterm elections, activists have long called on taxing the fossil fuel industry to help pay for efforts to address climate change, close environmental justice disparities and accelerate the clean energy transition.

Annual inflation in the United States remains near a 40-year high, hitting 8.2 percent last month, according to the Bureau of Labor Statistics. And economists broadly agree that the Russian war in Ukraine, which has upended global energy geopolitics, continues to play an outsized role in the historic inflation plaguing much of the world.

That has translated to higher prices on any number of goods and services for Americans, who have struggled with exorbitantly expensive gasoline in recent months. While the national average for a gallon of gas has fallen to $3.76, back in June it hit a record-high of $5.01 per gallon, according to AAA.

When applied specifically to polluting industries, such as in this case, it can also be called a “polluters pay tax.”

But while customers have suffered at the pumps, the biggest oil companies in the world are reaping windfall profits this year. ExxonMobil, Chevron, Shell, BP, ConocoPhillips and TotalEnergy have together earned more than $100 billion in profits so far this year. That’s more than they earned all of last year, and nearly triple what they earned during the same period in 2021. Last quarter alone, Exxon reported $19.7 billion in earnings.

“It’s time for these companies to stop war profiteering, meet their responsibilities in this country and give the American people a break,” Biden said at the Monday press conference. “Oil companies’ record profits today are not because of doing something new or innovative—their profits are a windfall of war, a windfall for the brutal conflict that’s ravaging Ukraine and hurting tens of millions of people around the globe.”

Democrats would need to keep their congressional majorities this November to have a fighting chance of passing a new tax law. Republicans and fossil fuel interest groups were quick to denounce Biden’s announcement, accusing the administration of playing politics ahead of the elections and jeopardizing the country’s energy future.

But progressives and environmentalists praised Biden for the move, accusing Big Oil of gouging working Americans at the pump while lining the pockets of their investors. That includes many leading climate groups, which have argued for years that oil and gas companies should pay the costs of dealing with human-caused global warming because their products are the primary driver of it.

“We’re thrilled to hear President Biden’s support for a Windfall Profits Tax to hold oil and gas companies accountable,” Lauren Maunus, advocacy director for the Sunrise Movement, said in a statement. “This is what Democrats should have been championing all year.”

A “windfall tax” is when a government targets a certain industry—say because they cause significant pollution—then taxes it when profits exceed the industry’s annual average. The government would then use that money for initiatives that benefit the greater good, such as implementing programs that clean up water or air pollution caused by the industry. When applied specifically to polluting industries, such as in this case, it can also be called a “polluters pay tax.”

Many activists and other climate-conscious lawmakers have argued for years that a polluters pay tax would be one of the most efficient and effective ways to tackle the climate crisis. The Biden administration included such a tax in the bipartisan infrastructure law passed by Congress last year, which will help pay for cleanup efforts of toxic Superfund sites that are seriously backlogged because of years of underfunding. Maryland Sen. Chris Van Hollen also proposed legislation earlier this year that would tax Exxon, Chevron and a handful of other major oil and gas companies to pay for damages and other costs associated with floods, wildfires and other natural disasters that scientists have linked to rising greenhouse gas emissions.

That legislation, which has the support of progressive lawmakers—including Vermont Sen. Bernie Sanders, Rhode Island Sen. Sheldon Whitehouse and Massachusetts Sen. Elizabeth Warren—would raise an estimated $500 billion over 10 years, proponents said. It’s unclear if that bill would be linked at all to Biden’s proposal on Monday.

Discussions about polluters pay taxes will also likely make an appearance at next week’s COP27 global climate talks, held in Sharm el-Sheikh, Egypt. While the world’s wealthiest nations are largely responsible for causing the climate crisis, it’s mostly poor, developing countries that are suffering the worst of its consequences. Addressing that topic is expected to be a top priority during the talks, as my colleague Marianne Lavelle reported.

A study published earlier this year by Dartmouth College, for example, concluded that U.S. greenhouse gas emissions alone cost the world more than $1.9 trillion in climate-related damages between 1990 and 2014. Emissions from four other top emitters—China, Russia, India and Brazil—caused an additional $4.1 trillion, it said, and altogether the five countries caused losses equal to roughly 11 percent of annual global GDP.

“A just transition means leaving no person or country behind,” United Nations Secretary-General Antonio Guterres said during a separate climate conference held in New York City back in September. “It is high time to put fossil fuel producers, investors and enablers on notice.”