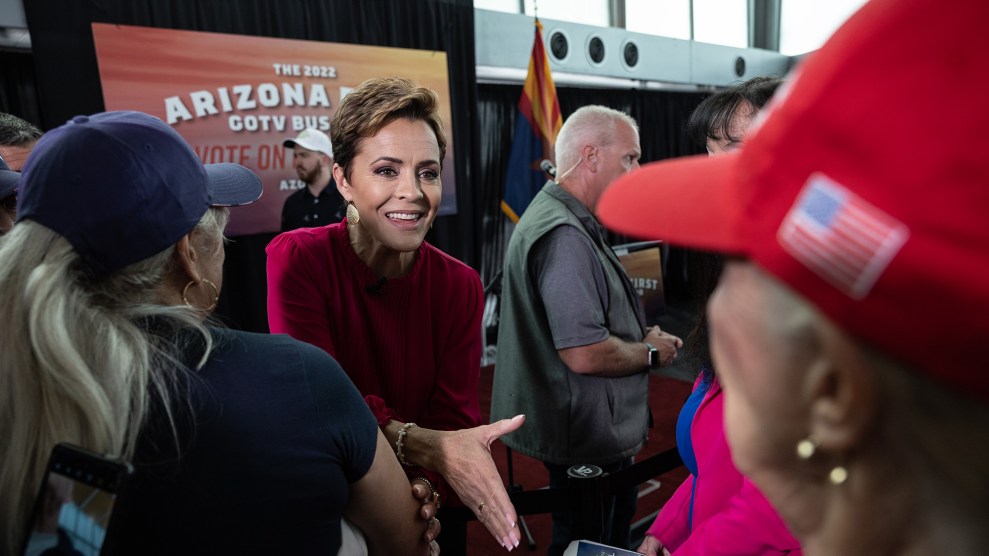 In the final days of the election, the Republican candidates in Arizona have been traveling the state together on bus tour. The first stop, on Sunday, was a meet and greet with local GOP activists and volunteers in Tucson. Kari Lake, the nominee for governor, was expected to be there.

Pamela, 71, said she had already met the other candidates but now she was most excited to see Lake. But Lake never made it. Diane, 63, wanted to see Lake so much she drove to the next event, at a wedding venue near downtown, to see the candidate, a charismatic ex-TV anchor and a staunch believer in the Big Lie that Trump was the rightful winner of the 2020 presidential election. But Lake wasn’t at the second event, either. Even as the crowd cheered and waved signs for the other candidates—Mark Finchem for secretary of state, Abe Hamadeh for attorney general, and Blake Masters for the US Senate—it felt like a warm-up act without the main show.

On Monday, at a megachurch in Phoenix, the three Republicans again warmed up the audience of roughly 180 people before Lake took the stage to the song “American Woman.” It was a testament to her newfound GOP stardom that several members of the audience had traveled from out-of-state to see Lake. Matthew Isaac, 38, and his girlfriend flew in from San Jose, California to see her. They would also use their trip to look at houses; if Lake wins on Tuesday, they plan to move to Arizona. “She caught my eye with her ability to spar with the media,” Isaac said.

Matthew Isaac, 38, and his girlfriend flew in from San Jose, California to see Lake. If she wins on Tuesday, they plan to move to Arizona.

This is a carefully curated part of Lake’s brand: she became a national GOP star by leaving her TV station job and fashioning herself as a whistleblower who can expose the media’s lies. She earned Donald Trump’s endorsement by parroting the false claim that the 2020 presidential election was stolen, which set up a constant confrontation between her and the press. As my colleague Tim Murphy writes in his profile of Lake:

Lake’s antagonism to the press has been a major part of her appeal. She refers to the Arizona Republic, the state’s largest newspaper, as the “Repugnant,” and once called one of its reporters “a little worm” for writing about her advocacy for ivermectin as a treatment for Covid. One of her first campaign ads during the primary featured a video of Lake accosting Brahm Resnik, a veteran political journalist at Phoenix’s NBC affiliate, for, she claimed, not saying the Pledge of Allegiance at her anti-mask rally.

“She understands the media has a narrative,” Isaac said. “It’s good to have a candidate who can keep them honest.”

Todd Richie, 61, of Phoenix also said he admires Lake for how she sticks it to the press. “When I heard she quit Fox,” he said, referring to her longtime job as an anchor on Fox 10 in Phoenix, “that day I supported her 100 percent.” In fighting with the media, she proved her “moxie,” he said. The media is the enemy, and in going up against it, Lake forges her appeal as a tough candidate.

The audience’s distrust of the media has been reinforced by the candidates throughout the election season—and has furthered the anti-media narrative that Donald Trump kicked off during his presidency.

In 2019, Trump began calling the mainstream media the “enemy of the people.” Arizona’s Republican candidates aren’t too far off in their own characterizations: At each stop, Hamadeh has called the media the “propaganda arm of the Democratic Party.” At Lake’s rally on Monday, the first thing she did was criticize the media. “Many of you remember me from my days on TV,” she said to cheers. “I stepped away from that when I realized that it was all propaganda and I wasn’t willing to push that.”

At the end of her speech, Lake described the press not just as the enemy, but a weak one whom she had vanquished. “You guys watching the fake news anymore?” she asked. The crowd roared no. She said that her campaign had received “100 percent negative coverage by the fake news.” She continued: “And we still have a movement. That tells me that they’ve completely lost control of the narrative. And they’ve lost all power. Is that a beautiful thing?” The audience cheered in agreement. “Congratulations to us.”

“The press is not on our side,” Richie told me before Lake’s speech. “And nobody knows this more than Kari.”