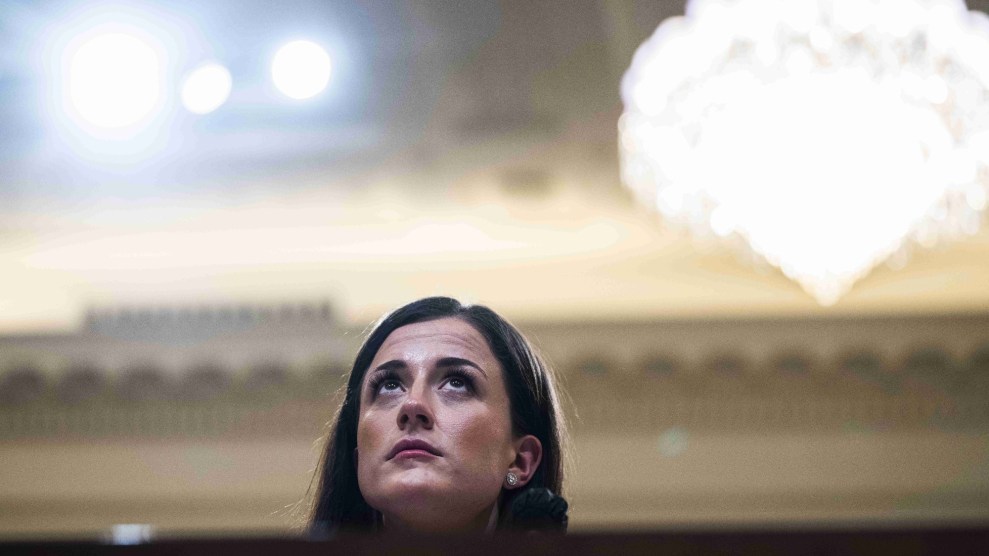 Former Trump White House aide Cassidy Hutchinson, who offered dramatic testimony at a January 6 Committee hearing in June, detailed her own lawyer’s efforts to keep her quiet in an explosive deposition made public Thursday. Now he’s taken a leave of absence from his law firm, in a swirl of controversy over ethics violations.

According to her deposition, attorney Stefan Passantino, who had previously worked as a White House attorney for Trump, told Hutchinson, who had been subpoenaed by the panel, to “downplay” her knowledge of the events leading to January 6 in her testimony and to also claim she could not recall other important details. Passantino offered to help her find work in what he referred to as “Trump world,” while making it clear he was considering the interests of the former president ahead of her own, she testified. The timing of the offers to “take care” of her financial needs, Hutchinson said, suggested they were linked to her offering testimony that did not hurt Trump or his allies. Passantino even warned her that Trump often read transcripts and bore grudges against witnesses who talked too much.

“We just want to focus on protecting the President,” Hutchinson said Passantino told her before her first interview with the panel. “We all know that you’re loyal.”

Passantino, who was, strikingly, formerly a top ethics attorney in the Trump White House, was paid by a Trump PAC called Save America, to represent Hutchinson. She didn’t know that at the time, because he refused to tell her who was paying him for the work, she said. She also said he shared details about her testimony with other lawyers working for Trump clients against her wishes.

Those actions represent gross violations of basic legal ethics and DC Bar rules governing conflicts of interest, ethics experts said. Those rules require lawyers from taking third-party payments that interfere with their “independent professional judgment,” and mandate that the attorneys obtain “informed consent from the client” for such arrangements. If Hutchinson is telling the truth that Passantino didn’t tell her who was paying him, she could not consent, noted Kathleen Clark, a law professor at Washington University in St. Louis who studies legal ethics. And Clark said that’s not the half of it.

“This is not like some technical violation,” she said. “If her account is true, his conduct is reprehensible…He betrayed his client.”

Passantino told reporters Wednesday that he is on a leave of absence from his firm, Michael Best & Friedrich LLP, due the “distraction” caused by the allegations. The firm has removed his bio from its site. He did not respond to questions from Mother Jones. But in a statement to various outlets Wednesday, he said: “I represented Ms. Hutchinson honorably, ethically, and fully consistent with her sole interests as she communicated them to me. I believed Ms. Hutchinson was being truthful and cooperative with the Committee throughout the several interview sessions in which I represented her.”

Hutchinson’s deposition is riveting. She described clearly the predicament of many low or mid-level White House aides caught in investigations into Trump dating to the start of his administration. Hutchinson, in her mid-twenties and out of work, said attorneys she contacted after the committee subpoenaed her sought up-front retainers of $125,000 to $150,000. She said she unsuccessfully sought financial help from her estranged father and her uncle and aunt (who she says are QAnon adherents), and initially resisted seeking help from “Trump world” because she knew the price was supporting Trump’s interests. She agreed to be represented by a Trump-connected lawyer despite those misgivings.

“I’m fucked,” she said she told her mother. “I am completely indebted to these people… They will ruin my life, Mom, if I do anything that they don’t want me to do.”

Cassidy said that during her first two interviews, with Passantino on hand, “I almost felt like I had Trump looking over my shoulder. Because I knew in some fashion it would get back to him if I said anything that he found disloyal. And the prospect of that genuinely scared me.”

What might be most striking about Hutchinson’s account is that she appears to be one of many former Trump aides relying on support from the former president’s coffers, and on lawyers who may place Trump’s interest above their clients’. There is little reason to think her situation was unique. What is unusual about it is that Hutchinson decided to defy “Trump world,” replace her lawyer and detail their interactions in sworn testimony. (She attributes her change of heart to advice from an unnamed Republican House member, and her own Wikipedia reading, while driving to New Jersey, about the testimony of former Nixon aide Alexander Butterfield during a Senate Watergate hearing.)

Hutchinson described an elaborate infrastructure of Trump loyalists who helped her seek jobs—as long as she was considered a loyal Trump team member. Florida politico Susie Wiles, a lobbyist credited with helping engineer Trump’s wins in the state, Matt Schlapp, head of the American Conservative Union, Meadows, former Florida Attorney General and White House official Pam Bondi, and former Trump spokesman Jason Miller were among the ex-Trump officials Hutchinson said dangled jobs while she was facing questions from the committee. Miller even suggested he would hire Hutchinson at Gettr, the pro-Trump social media outfit (which we have reported appears to be run by exiled Chinese mogul Guo Wengui). But all those job offers dried up once word leaked that Hutchinson proved to be forthcoming with the panel.

“The question is, is Passantino an aberration or is he a typical Trump world lawyer?” Clark asked.

Russ Choma contributed to his story.