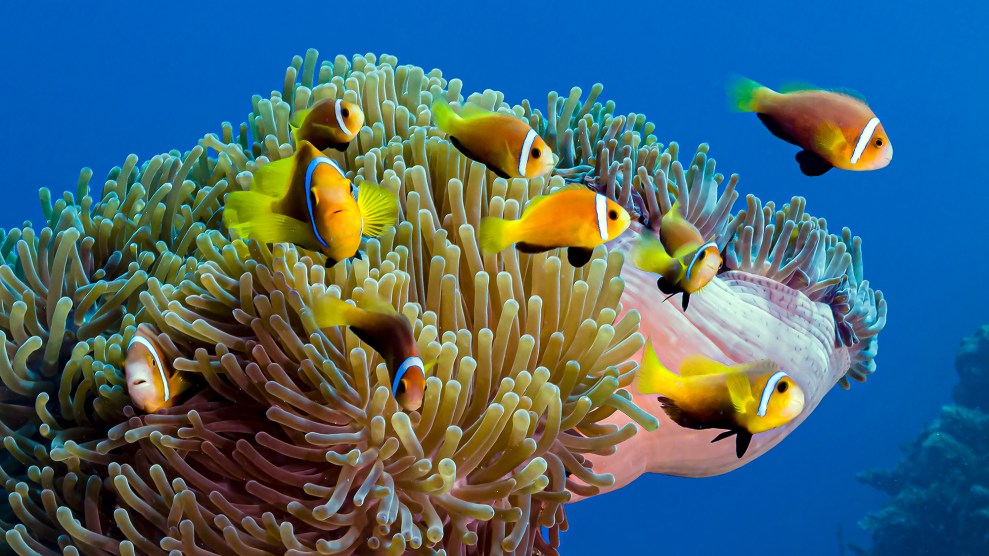 The ocean may cover 70 percent of the Earth’s surface and contain much of its animal life, but you might not get that impression from the UN discussions in Montreal to save global biodiversity, with some delegates fearing marine protections could be severely watered down or dropped entirely.

Although overfishing, global heating and acidification are considered an existential risk to what has been called “the lungs of the planet,” so far there are only two mentions of the word “ocean” in the latest 10-page, 5,000-word working agreement at Cop15—let alone specific demands to curtail fishing, protect coral reefs or stop deep-sea mining.

In public the ocean, which represents 95 percent of the planet’s biosphere, isn’t being entirely ignored: Delegates have approved a general draft on marine and coastal biodiversity, and there remains hope that the 30×30 pledge to protect 30 percent of Earth by 2030 will also include the ocean. In private, participants in the working groups—the closed-door sessions where the details are hashed out—say several countries are acting obstructively, with China, Russia, Iceland, and Argentina among those accused of being hesitant to commit to specific restrictions.

The high seas present a conundrum. Most of the ocean lies outside national jurisdiction, and is effectively lawless.

“We’re worried these countries will try and water this down to, say, 10 percent,” says Simon Cripps, executive director of marine conservation at the Wildlife Conservation Society and a Cop15 participant. “We’re already sitting at 7 percent protection, of which 3.5 percent is in any way effectively managed, and look—sharks are going to pieces, fisheries are massively overfished, you’ve got coral reefs on the verge. So clearly a 10 percent goal isn’t working.”

Because the negotiations work on a consensus basis, individual countries and coalitions can effectively veto things they don’t like.

One of the perceived obstacles is fishing. China maintains the largest distant fishing fleet in the world, operating 17,000 industrial trawlers that fan the globe and cluster along the borders of other countries’ jurisdictions, sucking up vast amounts of fish and squid, for example near the Galápagos. So, when the word “fisheries” was dropped from the latest working document in the section about ending perverse environmental subsidies, it came as little surprise to many; Cripps explains that losing the specific word was a way to keep countries from vetoing the entire section, and making at least incremental progress.

Another stumbling block is money. Developing countries are wary of restrictions if no more money is promised to help pay for them. On Tuesday night, Brazil led a group of developing countries that walked out of a finance meeting, protesting that donor countries were refusing to create a new fund for biodiversity.

Those wealthier countries argue that Brazil—as well as China, India, and other large countries whose economies have ballooned—should start pitching in to pay for biodiversity, too.

This means that, even if 30×30 were agreed, it might not help marine biodiversity at all because of yet another unsolved problem: the high seas. Most of the ocean lies outside national jurisdiction, and is effectively lawless. Countries only have sovereign authority up to 200 nautical miles from their coast; everything beyond is considered the high seas, ruled by nobody. A separate set of UN negotiations has been under way for years to agree a high seas treaty, but the last round of talks ended in failure. They are reconvening in March 2023 to try again.

Without that treaty, any agreements made in Montreal to protect ocean on the high seas are legally meaningless, as there would be nobody to enforce the rules. There are regional fisheries management organisations (RFMOs), which set quotas to prevent species, such as tuna, from being overfished on the high seas, but their enforcement powers are limited in scope and they are heavily influenced by commercial fisheries. Countries could also use the parallel negotiations as an excuse not to act, arguing that protecting the ocean isn’t a matter for Cop15 at all.

A few nations have been forging ahead closer to home, with Costa Rica, France and the UK proposing ambitious limits off their own coastlines – though almost all the UK’s marine protected areas still allow bottom-trawling.

“Designation is not protection,” says Steve Widdicombe, director of science at the Plymouth Marine Laboratory. “You can allocate a particular label or piece of ocean and say, ‘Oh, it’s a marine protected area, it’s a site of special scientific interest, it’s a nature reserve’ or what have you. Well, you’ve still got bottom-trawling going on in there, you’re still pumping sewage into it.”

Cripps raises the possibility that even if the Convention on Biological Diversity (CBD) fails to reach an agreement, the ocean might already soon be 30 percent protected in some form. “You’ve gotta ask – if CBD doesn’t get consensus, are we gonna get 30×30 anyway?” he says.

But he points out that it means business as usual – with nothing changing in terms of overfishing, deep-sea mining, acidification, microplastics or any of the other threats facing the embattled ocean.

“It should be much easier [to protect 30 percent of the ocean] than the land – that is the conundrum and the paradox here,” National Geographic explorer-in-residence Enric Sala told the conference. “Thirty percent is not the goal: it’s a milestone. Studies show we need something closer to half of the ocean if we are to prevent the collapse of our life support system during our lifetimes. But it is the unprotected 70 percent where our use of resources really has to be done more responsibility, to let that 30 percent help to regenerate the rest of the ocean.”

Conservationist Sol Kaho’ohalahala, a seventh generation Hawaiian, agreed. “In a native Hawaiian perspective it is almost saying as though only 30 percent of our ancestors are important and that the other 70 percent, we might just have to put them aside.”