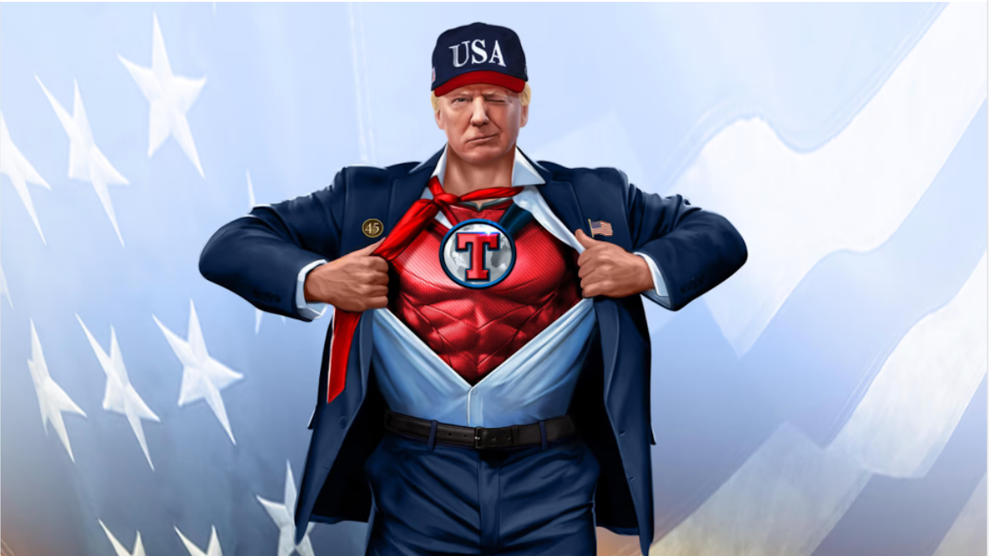 Donald Trump told his followers earlier this week that America needed a superhero and promised that a “major” announcement was forthcoming. The big reveal, it turns out, was that Trump is selling a collection of 45,000 non-fungible tokens (NFTs)—basically digital cartoons of him depicted in various poses: as a superhero, a businessman, a businessman with a basketball, etc.—for $99 apiece.

The announcement was a letdown, and one that raises lots of questions: Whose idea was this? Why pull the trigger now, months after most potential buyers have concluded that NFTs are a lousy investment? And who stands to make money?

Trump’s announcement was especially weird for a man allegedly running for president—he declared his third bid for the Oval Office one month ago. According to the fine print of the website selling the Trump images, the proceeds won’t go to his campaign. Instead, they flow to NFT INT LLC—a company that, also according to the fine print, Trump does not own or control. It simply uses Trump’s name and likeness through a licensing agreement with another (likely Trump-affiliated) company, CIC Digital.

Neither NFT INT LLC nor CIC Digital have a discernible footprint, either online or in the real world. Both corporations were registered this year in Delaware, which effectively shields their ownership and management from public view. (An email to the website selling the NFTs received no response.)

The sales website claims that 45,000 Trump NFTs have been created, and are selling for $99 apiece, which will earn the creator—whoever it is—about $4.4 million. NFTs, however, are not just objects of art; they are supposed to be digital assets an investor might conceivably resell at a profit. But as of Thursday afternoon, that seemed pretty unlikely.

OpenSeas.io, one of the major websites where NFTs are bought and sold, reported that about 4 percent of the Trump NFTs were posted for sale there. And some did sell—around 500 by 5 p.m. ET on Thursday, but the average price was $105—around the same price the original purchasers paid, after fees. What’s more, sites like OpenSeas charge their own fees, and the project creators collect a remarkable 10 percent from each sale as a “creator fee.” So the price of each NFT would have to be substantially higher than $100 for anyone but the creator to profit.

Another odd feature of the sale is that people who purchase a Trump card are entered into a sweepstakes that offers opportunities to attend campaign-style meet-and-greet events—like a golf outing or the chance to attend a Zoom session with Trump, at which he will take questions. Buying 45 of the cards ($4,455 plus fees), according to the website, gets the buyer into a 2,000-person gala that Trump will attend.

This wouldn’t be the Trump family’s first foray into NFTs. Last December, Melania Trump announced the launch of her own NFT line, featuring art based on paintings of her. In February, it was revealed that she had purchased all $185,000 worth of the Melania Trump NFTs herself.

One of the few actual names on the NFT website is that of digital artist Clark Mitchell, who put the images together. According to Mitchell’s website—he did not respond to a request for comment—he makes digital art for celebrities and brands. Some of the illustrations on his site are work he’s apparently done for Hasbro related to the Star Wars franchise. His two most recent Instagram posts show off art he created earlier this year for a Sylvester Stallone-themed NFT project and another NFT based on the rapper Ginuwine, who was famous in the late 1990s and early 2000s.

Matter of fact, the art Mitchell did for Ginuwine bears a strong resemblance to Trump’s NFTs.