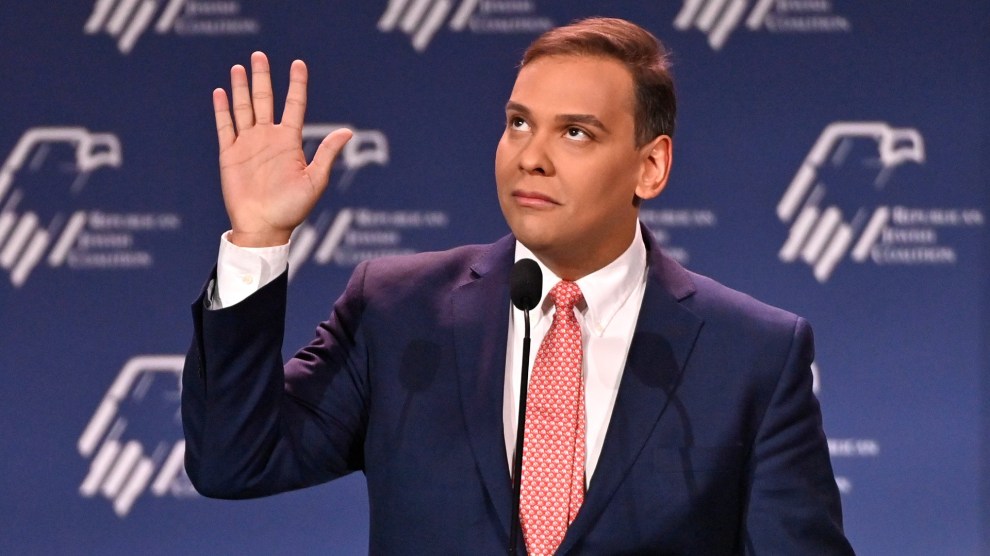 GOP Congressman-Elect George Santos flipped control of New York’s 3rd District in November by touting a long resume of impressive Wall Street and academic accomplishments. He said that he graduated with a bachelor’s degree in economics and finance from New York’s Baruch College in 2010 and that he later spent time at New York University. Plus, he enjoyed an illustrious financial career that included work at Citigroup, where he said he “quickly advanced to become an associate asset manager in the real asset division of the firm,” and another stint at Goldman Sachs. Plus, he said he was Jewish, the descendant of Holocaust survivors.

Turns out, according to a New York Times report from December 19, and subsequent reports from several other outlets, none of it was true. He never graduated from those universities, Citigroup and Goldman Sachs “had no record” of Santos ever working there, and historians can’t find any records of Jewish lineage in the Santos’ family tree.

After the bombshell report, Santos promised that he would clarify things this week. That happened Monday, when, in interviews with the New York Post and WABC radio, he flipped his story and admitted he lied about his resume. “My sins here are embellishing my resume, I’m sorry,” he told the Post. “I didn’t graduate from any institution of higher learning. I’m embarrassed and sorry for having embellished my resume…We do stupid things in life.”

“I’m embarrassed and sorry for having embellished my resume…We do stupid things in life.”

As for Citigroup and Goldman Sachs, Santos said he did not work for them directly, but that he did work with these companies through a third company, called Link Bridge. On his brief apology tour, he chalked the discrepancy up to a “poor choice of words.”

Then there were the lies about his family’s religious and ethnic origins. New York’s newly redrawn 3rd district, which had been represented by retiring Democrat Tom Suozzi, includes northern Long Island and northeast Queens—areas with many Jewish residents. Santos’ campaign website formerly described his maternal grandparents as having “fled Jewish persecution in Ukraine, settled in Belgium, and again fled persecution during WWII.”

However, after the Times story appeared, multiple Jewish-led publications dug up records that contradicted his claims. The Forward reported that Santos’ maternal grandparents were both born in Brazil before the Nazis rose to power; Jewish Insider interviewed a Brazilian historian who said none of Santos’ maternal ancestors “suggest any closeness to Judaism.”

In attempting to explain this to the Post on Monday, he argued that he was not misrepresenting anything but was merely misunderstood. He “never claimed to be Jewish,” he said, instead, he had described himself as “Jew-ish,” presumably to demonstrate his solidarity with the Jewish people.

But that too was a lie. The Forward published a report Tuesday citing a position paper the Santos campaign shared with Jewish leaders during his campaign in which he described himself as “a proud American Jew.”

Santos’ eight-point victory over Democrat Robert Zimmerman—someone who actually graduated from college and is Jewish—may partially be attributed to how he misrepresented his background. But winning a Congressional race also takes money, and one of the lingering questions is where Santos got his. Financial disclosure forms reveal that by 2022, Santos loaned his new congressional campaign and political action committee at least $600,000. (His disclosure forms from his first Congressional bid in 2020 said he earned just $55,000 per year.)

He once claimed that his family owned 13 properties but tenants were not paying rent during the pandemic; there were no such properties in New York state, the Times reported. Indeed, Santos had personal experience with trouble coming up with the rent check. According to a follow-up story in the Times, he faced at least three eviction cases between 2014 and 2017 due to unpaid rent.

His 2022 financial disclosure forms showed more than $1 million in income coming from a company he started called the Devolder Organization LLC. But that math doesn’t add up: the Washington Post reported that as of July 2022, Devolder’s revenue was less than $50,000, according to data modeling from the financial data company Dun & Bradstreet.

House Minority Leader Kevin McCarthy, who hopes to take over as House Speaker in the new Congress, has not publicly denounced Santos. (Santos has endorsed McCarthy for the top House role.)

It’s difficult to decipher what exactly Santos’ actual biography is; sometime between December 25 and December 27, he deleted the entire “about” section from his campaign website. But Santos did clear the air about something. When the 118th Congress begins on January 3, his dubious history will not be a problem. “I will be sworn in,” he assured WABC. “I will take office.”