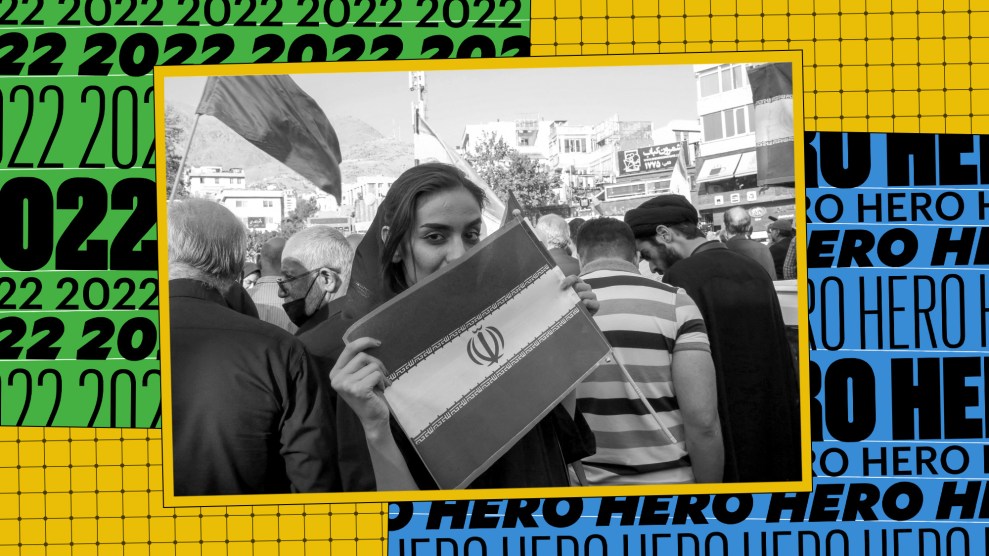 The images have become iconic. A woman sitting on top of a utility box pulls her hair above her head and begins to cut it as a crowd cheers her on. Another spinning around a bonfire, her long hair loose moving with her, throws her hijab into the flames. Teenage girls without their mandatory head cover, a cornerstone of the Islamic Republic of Iran, pack a school hallway and chant “death to the dictator.” Students smash and rip an image of the country’s Supreme Leader Ayatollah Ali Khamenei before putting their hands together and announcing “Don’t let fear in, we stand united.”

The women and girls of Iran have been at the forefront of the months-long protests that have shaken the country. On September 13, Mahsa Amini, a 22-year-old Kurdish woman who was known as Jina, was arrested by Iran’s morality police outside a metro station in Tehran. Her alleged crime? Improperly wearing a hijab. Three days later, after going into a coma, Amini died at a hospital. Authorities denied she had been beaten while detained and claimed she suffered a heart attack. Her family has maintained she had no previous health conditions and accused the government of trying to cover up her death, likely caused by a blow to the head.

Mahsa Amini, 22, was arrested by Iran's morality police for so-called "inappropriate hijab". She fell into a coma at a police station and sadly died at a hospital today. Morality police claim she had a "sudden heart attack". Her mother says Mahsa was murdered by the authorities. pic.twitter.com/ibWOnMBROk

The women-led anti-government demonstrations first erupted at Amini’s funeral in her hometown of Saqqez and have since expanded to other parts of the country. In some of the most conservative regions women dressed in chador, a black full-body garment, could be seen chanting “whether with hijab or without it, onwards to revolution.” Thus far, more than 1,600 protests have been recorded countrywide between mid-September and early December in face of the government’s violent crackdown. As many as 18,000 demonstrators have been arrested, including several minors who are being sent to psychiatric centers for “reform and training. Close to 500 people have been killed, with a 23-year-old man publicly hanged. Women have been targeted in particularly violent ways, according to doctors interviewed by the Guardian who reported treating them for wounds in the face, breasts, and genitals.

The movement has also garnered the support of men. In a song titled “Baraye,” or “for the sake of,” which has become the unofficial anthem of the protests, singer Shervin Hajipour, who was arrested during protests and later released on bail, writes:

For dancing in the streets
For our fear when kissing loved ones
For my sister, your sister, our sisters
For the changing of rotted minds

For the dogs, innocent but banned
For all these never-ending tears
For never experiencing this moment again
For the smiling faces
For the students, for the future

For the feeling of peace
For the sunrise after long dark nights
For the stress and insomnia pills
For man, motherland, prosperity
For the girl who wished she was born a boy
For woman, life, freedom

For over four decades Iran’s clerics have used intimidation and repression to force women to cover their hair.

The younger generation of Iranian women no longer fear them. pic.twitter.com/lzmzDn5ECQ

It isn’t unprecedented for women in Iran, who TIME magazine recently named their “Heroes of the Year,” to lead demonstrations and to defy the hardline dress code despite the risk of punishment for a criminal offense. But Amini’s death struck a nerve among Iranian people and the diaspora. The grieving outcry over the loss of this life quickly took the shape of a broader intergenerational movement repudiating an oppressively patriarchal regime and calling for freedom and equal opportunities for women.

Their adopted slogan, “Women, Life, Freedom”—which has its origins in the Kurdish women’s movement—has been echoed by a young, online generation who couldn’t be more removed from the octogenarian cleric leaders ruling the country. ‘The fury and desperation in their chants,” Iranian-American author Azadeh Moaveni wrote in the New York Times, “and the confident arrival of Iran’s insurgent girls into the dangerous public sphere of protest is exceptional and extraordinary. They are fighting preemptively against a future where their bodies will continue to be controlled by the Islamic Republic.”